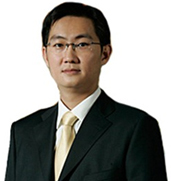 Wealth won't give you satisfaction; creating a good product that's well received by users is what matters most...

Ma Huateng also acknowledged as Pony Ma is a Chinese entrepreneur who founded an internet connection company named Tencent. And it is one of the largest companies in China. He is a young entrepreneur who started off Tencent during the year 1998. As of February 2014, he is the third richest person in China and 70th richest guy in the world, with net assets and property worth $14 billion according to the Hurun Report Global rich list.

To talk about the co-founder of Tencent, Ma Pony, the guy is incredibly shy and a complete geek, who is all to himself. Not many of his associates know where he resides in China, whether on the China Mainland or of the outskirts of Shenzhen province as such. He appeared in a shiny grey suit at a teet-a teet event named WE which stands for We Evolve.

He said that in his initial days he wanted to become an astronomer, which simply didn’t happen. And he spoke on some of the global expansion movements he had proposed for his company.

Ma Huateng is a Chinese by Nationality and he was born on the 29th of October in the year 1971 in the Chaoyang District, Shantou, Guangdong, China. He presently resides in Hong KongMa Huateng was born on the 29th of October 1971. He was born in a city named Chaoyang, Guangdong also known as Pony Ma. And he is a Chinese by nationality. Ma did his Bachelor’s degree in Science specializing in Computer and its applications during the year 1993. He pursued his studies at Shenzhen University. This is one of the top cadre universities in the whole of China. He started his big internet based company during the year 1998 and there is absolutely no looking back for the 43 year old entrepreneur. Ma Huateng is known for his constant efforts to avoid media on the whole. He likes to be called Pony, which is English name. He is known to everyone as the third richest person in China and stands in the 70th position of the richest in the Worlds.

*Prior to co-founding the internet based company, Mr Ma was in charge of research and development at Internet paging system development at China Motion Telecom Development Limited, a supplier of telecommunications services and products in China. Mr Ma is a deputy to the 5th Shenzhen Municipal People’s Congress and the 12th National People’s Congress. He holds more than 20 years of experience in the internet and telecommunications field. He was a director at Advance Data Services too.

*Mr. Huateng has also served as the Director in the firm Ohio River Investment Limited. He also served on various roles like the Principal Founder, Chairman, Chief Executive Officer, Chairman of Nomination Committee and Member of Investment Committee with the Tencent Holdings Ltd.

His journey with Tencent Holdings Inc.

Ma Huateng, who is 42 years old, is an executive director, Chairman and Chief Executive Officer of Tencent Holdings Inc. He is responsible for drafting strategic plans and seeing to it that the plans are translated into actual results. He also takes care of overall administration and management of the group, as such. Mr Ma is one of the core founders employed by Tencent group since 1999. Tencent, which is China’s most powerful internet company, is headquartered in a glassy tower in Southern Shenzhen. Absolutely no hype and hoopla with the internet biggie unlike Silicon Valley’s funky campuses.

The company’s first product was an instant messaging tool named Tencent QQ, which quite caught up the flame among gaming freaks and online users across China. It is one of the top three internet companies in China, just next to Alibaba and Baidu.

Under the leadership and guidance of Mr Huateng, the internet business has diversified its business operations to mobile applications as well. The mobile wing named We Chat received an overwhelming response and 200 million active users were testimony to the roaring success of Tencent’s mobile phones wing. Other diverse range of services provided by the internet biggie includes web portals, e-commerce and fantastic online games. In fact 3D games like Legend of Yulong and Legend of Xuanyuan boosted up the revenues of the company by more than half, resulting in a profit margin of US $ 1.5 billion. The total revenue amounted to US $ 5.1 billion.

Other interesting games developed by Tencent Holdings include Journey to the Fairyland, Hero Island, Dragon Power, World of Fantasy, Cross fire, League of Legends, QQ Free fantasy and a lot more. His games are renowned and well played by online users across the globe.

It is so hard to take the words, off his mouth. He and his team are constantly into developing one gaming application or the other. The team is working towards integrating social-media; gaming and e-commerce, all bundled up into one, which makes up for an amazing user experience. If you can chat on Facebook with the same application as shopping on e bay.com, wouldn’t the experience be a fulfilling one?

Tencent recently reached out at $139 billion at the Honk Kong Stock exchange. Just that the gaming wizard is keeping it hidden, from the rest of the world.

He and his fellow mates once had a dream vision of having an internet based observatory to study the movement of planets and stars even on the remotely polluted grey skies. And this is how his vision pulled off. A man bought a house in the mountainous region of South China and built a station surrounding his home. Anyone could plug in. And the results were magical.

Ma Huateng says that “At Tencent, we may be businessmen, but we are still chasing our IT, our science. We are still striving to create something really cool, trying to create things we couldn't even imagine without our new technologies. I am still clinging to this enthusiasm." These are words of inspiration, youngsters can look forward to.

To develop new products, Ma developed two teams of engineers, one to work in Shenzhen who were originally a part of the QQ team. And the other team was based in Guangzhou. Both were given similar set of instruction. The first team developed an app, for text messaging. And the other team came out of the black room, with a group chat application. The two were integrated into one and the app was named Weixin, which was launched in 2011.

There is more to go, with the silent yet exciting player on cyberspace!