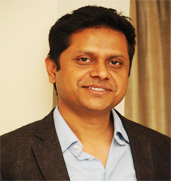 Around 25% of our business is coming from mobile platform, and we do expect that number to cross almost 50% in next 18 months…

Mukesh is an IITian who started off Myntra, as an e-commerce company having its core focus on fashion and life style products to cater to the urban crowd. Myntra has its head quarters in Bangalore, Karnataka. Mukesh started off the firm along with two of his other batch mates namely Ashutosh Sac and Rishi Ranjan.

The trio actually wanted to start a company with a focus on personalization of gift items but then the firm now, has its mainstay with branded apparels and fashion accessories.

The recent advancement made by myntra.com was, it has joined hands with Flip kart, another e-commerce biggie which caters to all types of fast moving consumer products like watches, t-shirts, mobile tablets, saris, candle stands and much more. This was to prevent Amazon.com, an international biggie, from dominating the local markets. The merger happened in May 2014. Under the leadership and guidance of Mr. Mukesh Bansal, Myntra went all out to win the best E-commerce site of the year 2011-2012. There is more to go, for the 40 year old young entrepreneur.

Mukesh Bansal is said to be a native of Haridwar whose father choose a public sector job over a family business. Mukesh Bansal has done his B Tech in Computer Science. He passed out of Indian Institute of Technology, Kanpur. He did his graduation from 1993-1997. He was born and brought in a middle class family who made it big in IIT and also started his own company. He has worked in quite a lot of companies before Myntra took center stage. He had moved to India in the year 2007 and started Myntra. Let us look at his career spark and how it all started off.

* He initially started off as a System Analyst with Deloitte consulting group, the moment he passed out of IIT. He worked with Deloitee Consulting from July 1997 to May 1999 (1 year and 11 months)

*He then quit Deloitte Consulting to join Nextag, another IT biggie. He worked in the aforesaid firm as a software engineer for about a year, June 1999 to May 2000.

*He then elevated his profile as a Senior Software engineer, and he got placed in Ewanted.com. He worked in the firm from July 2000 to May 2001.

*He then completely changed his career streak to a new dimension, all together. He got placed as a Senior Product Manager at Centrata. He worked there from July 2001 to December 2004 (3 years and 6 months). He was able to get a solid insight on what marketing was all about.

*He then got another big promotion and joined Cisco as the Director of Product Management. He worked there for 1 year and 11 months, Jan 2005 to November 2006.

*Myntra happened in 2007, and there is no looking back, for this young entrepreneur.

His Journey with Myntra

As you might have gone through his career profile, Mukesh always wanted to jump from one company to another. It is pretty evident that he didn’t want to be working under someone and he wanted to start a business enterprise of his own.

As you have already seen in the introductory paragraphs, Myntra was mainly started in the Year 2007. Mukesh, Ashutosh and Rishi started the firm with an aim of providing personalized gift articles. It mainly worked on the B2B i.e. Business to business operational model. Between 2007 and 2010, the online portal was involved in personalizing as many as 15 products. These included t-shirts, mouse pads, calendars, watches, teddy bears, mugs, watches, pendants, wine glasses and jigsaw puzzles. Customers had to order the products from the online portal and the products were delivered right across their door step, within 3 business working days.

Within 3 years since the company started off, it gained more than 50% of market share in the personalization domain. It was involved in personalization of jerseys and jackets of popular Indian cricketers, IPL teams (Indian Premier League) and other foot ball teams as well. This way, Myntra was able to branch out its line of business into high street branded fashion wear.

By 2011, Myntra was having a tie up with more than 350 local as well as international brands including the likes of Puma, Nike, Converse, Adidas, Reebok, Lee Cooper, Numero Uno, Sketchers, Crocs, Fila, Catwalk, Carlton London, etc. It now offers branded t shirts and jeans both for men and women. Jealous 21, Forever New, Lee, Ink-fruit are the typical female brands, Myntra caters to. It deals with fast track watches, as well.

Mr. Mukesh Bansal has been shaping up the e-commerce website in a very good way, indeed. Flip kart had launched a ‘Big Billion Day sale’, giving customers a variety of attractive discounts on products retailed by the e-commerce biggie.

Myntra simply does not want to follow the crowd. Under the leadership of Mr. Bansal, Myntra organized discounts and offers on a wide gamut of products over a few weeks before the onset of Diwali. When Mukesh Bansal was interviewed by the spokesperson from Times of India, he only had one thing to say. He said I don’t want my customers to run behind a one day dhamaka pulling and pushing each other in the online queue. Rather I want my customers to be well-dressed for the festive occasion. The Chief Executive Officer has made a novel move towards customer centricity rather than on simply increasing the sales turnover, which is something really notable. He plans to organize road shows and similar kind of discount mela for upcoming festivals as well.

However Flip kart and Myntra have been merged into one unit, the CEO of Myntra, Mr. Bansal taking care of the core management team of Flipkart-Myntra combine. He is also working towards the scheme of ‘Indian Alibaba’. It simply means you name it and you have it. A-Z of fast moving goods will be captured by both the online entities leaving no room for international markets like Amazon or Ebay to dominate the scene. Four to five years down the line, it should be the Indian based e-commerce websites, which would inevitably be ruling the roost.

The entire project is worth a whooping $100 billion.