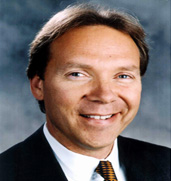 Communicating well, communicating often, and injecting the team with the competitive spirit with a sense of optimism around victory is a leadership philosophy…

A versatile leader and a telecom expert, Daniel R Hesse became the CEO of Sprint Nextel on December 17th 2007. He was also a great spokesperson and the voice behind Sprint’s ‘Simply Everything’ commercials. He was awarded with ‘Disability Matters Market place’ award, for his astounding range of products, he designed for the visually challenged and the hearing impaired communities. The great man also was involved in a mega e-waste management initiative by keeping more than 50 million mobile devices, out of reach from landfills. He has thus acted upon environmental reforms, in a pretty big way.

He was also into creating awareness towards reducing carbon emissions, through his Network Vision project.

Dan Hesse always wanted to provide senior friendly mobile packs to communities hard of hearing. He also wanted to help the visually challenged peers, to be able to use high end technology that mobiles and wireless, provides you with.This way, he has emotionally touched each and every person, through his innovative thoughts and deeds. There is more to go, for the telecommunications veteran.

Daniel R Hesse was born in the year 1953. We are still not aware, as to whether he is 60 years old or has completed 61 years of age. Hesse’s father pursued a long term career at the Army. He thus was put in army base schools, located throughout Italy. From kindergarten, up till his High School, he has changed 8 schools.

He received a Bachelor’s degree from the University of Notre Dame in government and liberal studies in the year 1975. He then went on to pursue his Master’s Degree in Business Administration, i.e. MBA from Johnson School of Management, at the Cornell University, way back in 1977. He did a third degree in since in the year 1989, from the MIT Sloan School of Management.

He started off, as an intern with AT&T, where he spent around 23 years, operating within the same company. From 1991-1995, he was the president and CEO of AT&T Network Systems International. This particular division was head quartered in Netherlands. He had been instrumental in launching the online biggie’s AT&T World net services in the year 1996 during the month of February. The scheme involved unlimited internet dial up, for as low as $20/month, as long as you remain tuned in to AT&T’s long distance services. The attractive scheme brought in quite a lot of customers to AT & T.

Daniel R Hesse took over the profile of a CEO and chairman of Terabeam Corporation between March 2000 and June 2004.

In June 2005, Dan joined Embarq Corporation, which was involved in providing landline services to customers across US.

On December 17th 2007, he joined Sprint Nextel as the CEO. Sprint Corporation is otherwise famously known as Sprint and the mobile service provider, is based out of US. It provides telecommunication services, wireless and internet services to all its customers. It is the third largest US wireless network operator with a customer base of 54.8 million customers, as on the third quarter of 2014. In addition to providing internet services, Sprint is also involved in providing wireless voice, messaging and broad band services. The Sprint brand works in tie up with its several subsidiaries namely The Boost Mobile, Virgin mobile and Assurance Wireless, to provide a wide gamut of mobile and internet services.

The company is head-quartered in Overland Park in Kansas. The company is listed in the fortune 500 by the New York Stock Exchange- NYSE.

His journey with Sprint International

Sprint was actually founded in the year 1899, as Brown Telephone Company. The firm aimed at providing land line services in rural areas of Abilene, Kansas. In the year 2006, Sprint exited from land line business and spun off its assets to another newly formed company, known as Embarq Corporation. Sprint still continues to be one of the largest long distance service providers, throughout the US.

During Hesse’s tenure with Sprint Internal, he has appeared in various commercials which appeared in black and white, representing the mobile company as such. Hesse’s ads were filmed in the New York City. The advertising companies which wanted Dan Hesse; to do the commercials included Goodby and Silverstein & Partners.

But the hardworking and determined guy still didn’t lose hope. His strategy involved containing the losses to a great extent, and at least maintaining the existing lot of customers. He focused at improving the level of customer service, to a great extent. He encouraged more and more customers to use prepaid cell phones. He also wanted to introduce 4G technology to the mobile phones. He aimed at opening more than 300 outlets throughout US, in order to increase in-person customer service. He served in Sprint Nextel from Dec 17th 2007 until August 6th 2014, while Sprint was taken over by Marcelo Claure, who is the founder of Brightstar Corporation.

Dan Hesse feels that mobile services and wireless is the only industry which has touched upon lives of millions, even in the ever dynamic modern world. It is technology that changes the way people work and live. In 2012, he joined Red Cross, with an aim of providing great internet and wireless technology, to the under-privileged sections of the society. It was with the leadership and guidance provided by Dan Hesse, that the company became the most improvement shown company during the last 5 years. The release was done through American Customer Satisfaction Index.