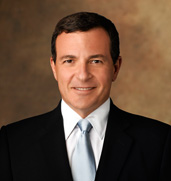 The heart and soul of the Walt Disney is animation, creativity and innovation…

Optimistic by nature, Robert Allen Bob Iger is an American businessman and the current Chairman and Chief Executive Officer of Walt Disney Company. He took over as the president of Disney, way back in 2000. He then went on, to take over the position as CEO, from Michael Eisner in 2005.When Roy E Disney was trying hard to have a profound management, this man, fought for the company’s rights and stabilized the overall administration of the Company. This was why; he was elected as the Chief Executive Officer of Walt Disney.

He was also instrumental in helping the company acquire ‘Marvel Entertainment’ in the year 2009 and Lucas-film in 2012, thereby widening the horizons of the company’s property franchises.

Iger received an award from Steven Spielberg, who is the founder of USC Shoah Institute for Visual History and Education. This was during June 2012. The award was presented to Iger, in recognition of his wide support of the Institute’s work. He was instrumental in carrying out a lot of socio-development activities for the welfare of the economy, through the institute. He is a great philanthropist, and the award was given to him, recognizing his humanity.

His leadership role in the corporate world, along with the significant role towards working for the under-privileged sections of the society, denotes two sides of the coin.

Robert Allen ‘Bob’ Iger was born in a Jewish family on the 10th of February 1951. He was born in Long Island, New York. His father, Arthur was a veteran in the IInd World War and served as the executive vice president and general manager of Greenvale Marketing Corporation. His father was also into public relations. While his mom Mimi worked as a teacher in Boardman Junior high school in Oceanside, New York.

Iger has done his Bachelor’s degree from Roy H School of Communications and he initially started his career as a local weatherman in a radio station. He then joined the American Broadcasting company in 1974 and gradually rose to higher positions up the cadre. Then there was absolutely no looking back, for this particular icon, who had a great vision.

He was elected as the president of ABC television’s Network group during the years 1993-1994. He then went on to become the Chief Executive Officer during the year 1999.

Robert A Iger or popularly known as Bob is the present CEO of Walk Disney Company from October 2, 2005.

He has also been the Chairman at Disney Consumer Products, from March 13, 2012. He was also a Trustee at the American Film Institute. He also serves as the Director at the Lincoln Center for the Performing Arts, Inc.

Bob also works as the Director of the National September 11 Memorial & Museum at the World Trade Center Foundation, Inc. and Hulu Japan LLC.

Bob Iger was also the Former President and Chief Operating Officer and Director at the ABC Inc. Apart from these he was also the Former Director at the Infoseek Corporation. He is also an Independent Director, Chairman of Nominating & Corporate Governance Committee and Member of Audit & Finance Committee at the Apple Inc from the year 2011 till date.

His journey with Walt Disney Company

On February 25, 1999, Disney named Iger as the president of Walt Disney International. It is a business unit that oversees Disney’s international operations. He also continued to be the chairman of ABC group. Disney International got its second CEO and chairman as Iger after Michael Eisner. The company had been without a president for almost 16 months since Michael Eisner took over, as Michael Ovitz had departed from the company way back in 1997.

It was finally decided in the year 2005, that Bob Iger assumed as the Chief Executive Officer.

Bob Iger appointed Peter Murphy as the company’s chief strategic officer and gave clear cut instructions to Peter, to run the show with utmost level of perseverance and commitment. He also took additional responsibility in running individual business units which were scattered all over. He thus initialized the consolidation of Walt Disney. Today, it stands as one of the best animation companies across the whole of US. Thanks to the visionary in Iger, to promote the company, the lavish way.

The company board reconciled with its major stockholders namely Roy E Disney and Stanley Gold, and they eventually dropped their ‘Save Disney’ campaign to join hands with Bob Iger. And Roy E Disney went on to become the company’s emerald director and consultant.

It was under the leadership and guidance provided by Iger, that the company decided to acquire Pixar Animations at a staggering price of $7.5 billion in an all-stock transaction. The merger paved way to John Lassetter, becoming the chief operating officer of Disney Animation Studios. John was also the creative advisor for Walt Disney Imagineering. Disney Imagineering unit is responsible for designing theme park attractions.

Roy E Disney who has always been critical even since Bob assumed top posting with Walt Disney himself admitted that it was wonderful to have the company in the hands of Bob Iger. These were the words spoken by Roy in favor of Iger

“Animation has always been the heart and soul of The Walt Disney Company and it is wonderful to see Bob Iger and the company embraces that heritage by bringing the outstanding animation talent of the Pixar team back into the fold. This clearly solidifies the Walt Disney Company's position as the dominant leader in motion picture animation and we applaud and support Bob Iger's vision”.

Iger has helped the American Communications biggie Walt Disney towards technological innovation. He has taken the international recognition, the company has, the world over, beyond imaginable heights. He put in a renewed amount of focus on the company’s traditional animation. And put it up as one of the top most strategic priorities.

On October 7th, 2011, it was decided that Iger would proceed over the company’s board as the chairman, following John Peppermint’s retirement from the board during March 2012. Iger’s position as Disney’s CEO and chairman will remain until June 30th, 2018.