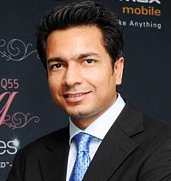 We must not follow the road map created by others. Rather, we must create one for ourselves….

Rahul Sharma is a young professional who was the pioneer behind formation of Micro Max, leading and an upcoming mobile company. Since two decades he has been looking into the trends of Indian consumers with regard to the Mobile market. He has been innovating the features of the mobiles in order to make high end models, with a lot of value added benefits. And the same can be afforded by the middle class segment of the society, as such. And the hot news for all you girls out there! He is still an eligible bachelor. He lives with his parents in Delhi.

Rahul Sharma is fond of latest cars and has a state of the art home with souvenirs and collectables from all over the world. And Rahul Sharma, who is the co-founder of Micromax, is one of the highest tax payers in the country. He resides at Mehrauli near Delhi.

The easy going Sharma is draped in his Armani suit and Versace shoes and stays in a three acre farmhouse with his family since 2011. Fifteen days in a month, he is seen travelling abroad. The two cars that await his gate include Mercedes and Bimmer. The third one is awaited, says the all excited Sharma. Along with fast cars, the mobile icon is also passionate about Formula one. He was brought up in a middle class up- bringing, with his father being the principal of Delhi public school.

He has done his Bachelor’s Degree of Commerce; from the Nagpur University. Rahul Sharma is an experienced marketing architect with hands on experience in product goods and technology marketing. He has spearheaded several successful campaigns For Proctor and Gamble, Microsoft X box, and Cable Shaw telecommunications; he has campaigned for the ads and participated in on demand television series. He has more than 13 years of experience, running to his credit, in sales and marketing. Pay per view, video on demand and Digital pay television was the campaigns developed by him, as such. He has held a number of management positions in Communications, Consumer Marketing and Brand Management. There is more to the 38 year old, young lad.

Rahul Sharma has been working with the Vice President of Marketing and Internet Channel with the MobileWave Group plc from 13th of June of 2007. He also serves as the Executive Director of Product Strategy and Channel Sales with Micromax Informatics Limited. He also served as the Vice President of on Demand Television Services for the Shaw Communications Inc. from the month of February in the year 2004.

Rahul Sharma also held a number of positions related to Communications, Consumer Marketing and Brand Management. He is the Executive Director of Micromax Informatics from 1st of April in 2007.

His Journey with Micromax

Micro Max is an Indian consumer electronics company, head quartered in Gurgaon. It is in the business of selling mobile phones, tablet computers, 3G data cards and LED televisions. Most of the raw materials are procured from China, basically! Micromax first started off, as an IT company, providing solutions on embedded platforms. This was in the year 2000. It then entered the mobile handset business, and became one of the largest Indian domestic mobile handsets company operating in low cost feature phone segments by 2010.

Presently Micromax has its presence on more than 560 districts, catering to 125,000 retail outlets in India. It is also gaining its foothold in international markets including Bangladesh, Sri Lanka and Nepal.

Here goes the story. There was a huge shortage of power in the district of Baharampur. Rahul Sharma saw a hone being powered by a truck battery. It was then he decided to manufacture mobiles with a longer battery life. You won’t believe it, if I were to say, that he launched a mobile phone with a month long battery back-up known as X1i. In 2011, Micromax entered the tablet market in sync with Canvas.

Today, in 2014, Micromax has surpassed Samsung in shipping the highest number of mobiles, especially this particular quarter. This was through the Indian harbor. In other words, Micromax is becoming the largest exporter of Mobile phones in India.

Originally, Micromax was sourcing all its mobile phones from China. But since April 2014, the company is manufacturing mobile phone handsets and tablets at its own manufacturing facility, set up at Rudrapur, Uttarakhand.

The company is expected to bring in more than a million dollars, with the current sales turnover increasing by 200% over the previous year.

How he plans to appoint a new Chairman for the business? Plus other accomplishments of Micromax

A leading newspaper interviewed the mobile icon, as to why he wants to appoint someone new for handling the responsibilities of the Chairman, while Mr. Sharma himself could do it. The reply Rahul gave was this

“I want to diversify my business and bring about better innovation in upgrading the company’s gamut on mobile phones and services. This leaves me with little time or absolutely no time to handle day to day affairs of the business. I want to appoint someone who is a veteran in telecommunications, to handle my $1 billion worth business.”

Subsequently, he appointed Mr. Sanjay Kapoor, the ex-chairman of Airtel, to take the seat of the Chairman.

At another product launch, someone asked him, what inspired the young lad to design smart phones and phones with dual SIM’s.

The mobile icon, who is gaining a foothold in international markets as well, narrated the following incident:

Didier Lombard who is the Chairman of ST Microelectronics which is European based mobile phone company also appreciated Mr. Rahul Sharma, in quite a lavish way. He said India would stand on an equal par, on technology and that we are nowhere lagging behind, when it comes to delivering high end products.

Recently, Micromax started its operations in Russia and also caters to SAARC markets. With the never say die attitude of the young 38 year old entrepreneur, things can only get better!

Rahul Sharma is a Bachelor and he presently stays with his parents in Delhi. He was a very urban lifestyle and is said to be fond of cars.