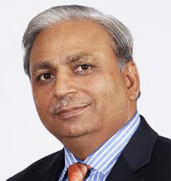 Digitalization will influence many players in the industry …

C P Gurnani is famously known as CP among his peer group, and he is the Chief Executive Officer and the Managing Director of Tech Mahindra. CP has played a very big role in shaping up Tech Mahindra, as to what it stands, as of today. He has spearheaded the eventual merger of Mahindra group with Satyam, to form Tech Mahindra or Mahindra Satyam. He has amazing leadership qualities and has led Tech Mahindra business development. As a manager with more than 32 years, spanning his entire career span, he has handled several start-ups, joint ventures, mergers, acquisitions, migrations and what not.

He is a friendly person, who believes in being a people’s manager, rather than bullying around with his subordinates. He is known to have his approach towards any issues that might crop up in the firm. A person who stands by his statement “creating leadership from within”, he admits that the true strength of any leader is known during the crisis period. He believes that he had an adventurous journey from the time he had taken over the fraud tainted Satyam.

His Early Days and Career

He is a chemical engineering graduate from the National Institute of Technology in Rourkela, and he is an esteemed member of the alumni, run by the institute. In his entire career span, he has held several positions in Hewlett Packard, HCL Corporations, Perot Systems India Ltd. before he joined Tech Mahindra. He is an outstanding person who gives values to the sentiments of his fellow colleagues. He works with dynamism and complete involvement, in which ever project he takes up. He is a man filled with enthusiasm and determination to get pending projects completed on time.

Mr. Gurnani was associated with a number of firm’s earlier to Satyam. He has served on a number of boards of several companies. He worked as the Director for Comviva Technologies Limited as well as Mahindra Satyam BSG Limited. He has essayed the roles of Chief Executive Officer, Whole-Time Director, Member of Investors Grievance Committee and Member of Investment Committee for Satyam Computer Services Limited in the year 2009.

He is presently serving as the Managing Director, Director, Member of Securities Allotment Committee and Chief Executive Officer of Mahindra Satyam and Tech Mahindra Limited. He is also on the Board of Dion Global Solutions Limited where he is as Non-Executive Director and Member of Audit Committee.

His career span within Tech Mahindra

Prior to Tech Mahindra’s acquisition of Satyam, Mr. Gurnani was leading the Tech Mahindra’s Global operations. He was handling various Sales and Marketing functionalities. He led to the development of Tech Mahindra’s Competency and Solution Units. Mr. Gurnani serves on the Board of Directors of Canvas M Technologies Limited, Canvas M (Americas), Mahindra Logic-soft, Servista and the Tennenbaum Institute at the Georgia Institute of Technology.

About Tech Mahindra as a company

Tech Mahindra is a leading global consulting company with a core focus on Information Technology. It is out and out a leading Software company. It provides technical and functional expertise to several industry domains including supply chain management and business service excellence.

The other areas of strength, where the company primarily focuses in, include enterprise solutions, client relationship management, business intelligence, business process outsourcing, engineering and product cycle development, infra-structure services and human resources, among others. The company has established its wings in several international locations like US, Canada, Brazil, The UK, Germany, France, Hungary, Egypt, UAE, India, Singapore, Malaysia and Singapore, where Tech Mahindra’s global delivery centers are prevalent. Mr. C P Gurnani was appointed as the CEO of Tech Mahindra with effect from 10th August 2012.

His recent accomplishments with Tech Mahindra

It was a joint decision taken by the Management to appoint Mr. C P Gurnani as the Chief Executive Officer of Tech Mahindra as on 10th August 2012. He was also endowed with the responsibility of acting as an Additional director of the board to handle crisis management.

During this period, Tech Mahindra decided to amalgamate two technology companies. It was then decided that the Parent company named Tech Mahindra takeover IT biggie Satyam to form a 4.5 billion entity. Satyam had gone bonkers when the ex-founder and Chief Mr. Ramalinga Raju got involved in a major reality scam. Tech M took over the 31% stake for $351 million of Satyam group, as fixed by the Government.

“Tech Mahindra has been instrumental in shaping my career and the opportunity at Mahindra Satyam helped me build on that foundation," Gurnani said.

He now focuses on ERP i.e. Enterprise Resource Planning in collaboration with Oracle India. This will envision the IT Company to broaden the horizons of development. He has been instrumental in setting up a leading delivery center in Saudi Arabia, representing the Mahindra Satyam group.

Few golden words from the business icon can prove a great deal of inspiration for the present generation leads:

a)He always refers to Mahindra Satyam as his company.

b)He considers the problems of Management as his problems and also has remedial solutions for the same.

c)He is devoid of any ego.

d)And he works for his salary.

This was what he said, when he gave a speech at a leading business convention. This great man has been instrumental in bringing valuable acquisitions with the techie company. He was the one who has strived hard in bringing Comviva range of products and giving the firm an enhanced level of business for its telecom products. Comviva deals with better options for customers to pay their mobile payments on time.

Talks are going in between Mr. C P Gurnani, MD of Tech M and Brazilian corporate firm, to catch hold of better business strategies from the Brazilian market. In order to catch gold fish, one needs to know where the breed of fishes thrives, so that one is able to tap the right opportunities at the right time. This is what the chemical engineering student, who was born and brought up in a small village in Rajasthan, has been doing all these years.

According, to Mr. C P Gurnani, an industry is able to grow strategically on four plans.

a)Number one, through business momentum, operational excellence and enterprise solutions.

b)Number 2 is through processes or services delivered by the management in sync with the plans drawn.

d)Lastly, the growth of the unit is by bagging on acquisitions and mergers.

He makes sure Tech M has been following up with 4 planks to reach an enhanced position in the business economy. There is more to go, to the success and pedestal of the 58 year old iconic exponent. None other than Mr. C P Gurnani, himself!

Mr.. Gurnani is presently living in the Noida city along with his wife Anita. The couple has two children.