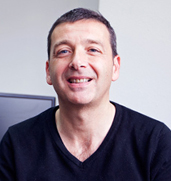 Wherever you are, you will find new applications suitable for your business; GetApp will help you discover the right one…

With versatile acumen in enterprise IT, Christophe is the co-founder and CEO of Get App. Get App is the largest independent business apps market place worldwide. Millions of businesses use Get App to discover, try and buy new business apps including mobile applications. Get App provides lead generation for millions of SaaS (Software as a Service) companies.

Get App also provides an integration platform as a service (iPaas) to connect a cluster of SaaS companies and help them in growing their businesses. Christophe has an extensive career in the technology industry. This is apart from providing applications and information on a platter.

Christophe has done his Master’s degree in Business Administration from Cranfield School of Management. He began his career with NCR (National Cash Registry Company) as the Sales Director of International Accounts. Then he took up the position at AT & T in France as a marketing lead. He was the marketing head of entire Europe. He then reached the position of a Vice President of Global Marketing for NCR’s financial division which was the most profitable one. After his tenure with NCR, he took up the role of a CEO at Fluiditi Ltd, a UK based financial firm. The company was later sold to Oberthur card systems. Christophe also served as CEO of Kinamik, a software security start up.

He worked for a couple of companies before he wanted to create his own empire. In July 2009, he decided to a start Get App, a cloud computing company which specializes in Market Place applications for a lot of SaaS companies. It has been nearly 5 years since the set up was established.

The penultimate spark in his career came up when he decided to start his own company named Get App. It is in fact the number 1 top slot position when it comes to Business Apps. Cloud Work, the other name for Get App helps businesses to easily integrate business applications. It acts as a virtual integrator and lets anyone instantly integrate apps and manage them securely in one place.

CloudWork is used by SaaS developers as a white label platform to grow their partner’s ecosystem. Get App is a preferred destination for businesses to discover, compare, review and evaluate apps that meet their business needs.

It was in the start of his career that Mr. Primault joined NCR and spent about 15 years with the firm before making his first start up with data integrity and security. He always states that this was his first failed experience through which he learned a lot, before he started GetApp.

His Journey with Get App

Christophe is the co-founder and CEO of Get App with strong back ground of IT enterprise. After he led as the CEO for two companies, he went on to do big in the SaaS world. He says his mission or aim in life was to help small business with cloud applications. SaaS gives smaller companies an opportunity to have access to enterprise class solutions and get the same at 1/4th of the cost big companies are paying to get the same source of information. This would give ample opportunities for smaller companies to compete with larger organizations in an innovative yet productive way.This made him start the cloud biggie firm named Get App.

Few excerpts from his interview to get a bigger picture of what he sees in future and how he has been shaping up the current position of the company.

When asked on what actually led him to start his own IT enterprise when he comes from a Finance background…?

He replied that Get App is the first source of connect to helping businesses get best contacts and apps to perform business better. As quoted earlier, it provides lead generation to most SaaS companies. Businesses typically operate on one or two cloud applications and once they have the get app or cloud work set up, they can get more apps. This helps them to operate on more business functions.

Today, he says 25% of small and medium businesses operate on more than 5 business applications to perform their day to day activities. Thanks to this great man’s efforts. But what happens is when a business is trying to catch hold of vital information; certain sections of data remain vague and disconnected among several applications. Integration of data to a common point or source of information was the second aspect, the firm wanted to focus on. With availability of data and data integration, it is easy to collate information and help users thereon.

An integration solution was what was needed to make SaaS apps talk to each other and be able to innovate current market trend setters. This motivated the team to develop a substantial cloud computing enterprise.

Vision for the future

The company’s aim for the future is to develop a sophisticated ‘Cloud Operation Center’ to small and medium scale businesses so that they can discover, manage and integrate all their cloud apps making it a single point of contact. This is however a projected 5 year plan as the markets is still immature and lot of testing is required to bring the forecasted plan to reality.

In some of his recent interviews he also stated that he is planning to branch out the firm to various other countries. He also planned and launched the getapp.fr which is French and would later expand to more and new geographies.

Christophe Primault is a dad of three kids. He is a long distance medallion in swimming and has won several triathlons and has been branded as ‘Iron Man finish’. He loves open water swimming and sailing. He lives in Barcelona, which is one of the best places in the world to operate business on a global level and he persuades his hobbies as and when time permits.