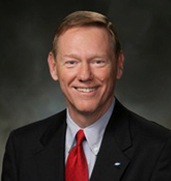 Recognized for reshaping the culture at Ford, Alan Roger Mullaly is an American engineer, business executive, former president and Chief Executive Officer of Ford Motor Company. Ford had been into the recession mode since late 2000’s. Ever since Alan R Mullaly took over as the CEO of Ford, the company has seen significantl growth in business. He was apparently the only American manufacturer to avoid a bail-out fund provided by the Government. He has always focused on one ford plan i.e, One Team. Mullaly’s achievements at Ford have been biographed by Mr. Bryce G Hoffman under the title “American Icon: Alan Mullaly and the Fight to save Ford Motor Company”. This book was published in the year 2012. On July 15th 2014, he was subsequently appointed to join the Board of Directors by the Google team.

Alan R Mullaly was born on the 4th of August 1945. He is 69 years old. Mullaly was born on Oakland, California to Charles R Dick Mullaly and Lorraine Lizette Clark who both met at a US dance party before they decided to tie the knot. Mullaly grew in his mom’s hometown in Kansas. He used to be inspired right at the age of 17 by John F Kennedy’s mission to send man to the moon.

Mullaly graduated from the University of Kansas with a Bachelor’s degree in Science which he passed out in the year 1968. He then completed his degree from the Aeronautical Institute and has done a fellowship programme in Business Management in the year 1982.

Mullaly was immediately hired by Boeing, an aeronautical company, the moment he completed his graduation in the year 1969. He joined the aerospace company as a space craft engineer. He has handled number of projects including Boeing 727, 737, 747, 757, 767 and 777. He led the cockpit team for 757 and 767 projects. The Boeing revolutionary project featured first all-digital flight deck in a commercial airplane. There was one more peculiarity to the whole design. It was the first two men crew on a long range aircraft and involved pilots for two different air plane engines.

Mullaly by his stupendous contribution of managing and engineering several multi-faceted air planes, went on to become the director of engineering. He handled the 777 program all by himself.

On account of his exhaustive and elaborative experience in the aeronautical industry, he was directly considered for the position of a CEO at Ford Motors and he invariably cleared the interview in a single attempt and he was not the easy-come easy-go kind of CEO’s. He was the guy to stay on!

His Journey with Ford

Mullaly took over the position as the President and CEO of the coveted car company on September 5 2006 succeeding William Clay Ford, Jr who remained as an Executive Chairman of the company’s Board of Directors. The company was facing acute recession at that point of time when he has done considerable amount of hard work and has stayed as a pillar to revive it from realms of recession and steered the growth of the company towards enhanced profitability.

Mullaly took over the restructuring plan of Ford Motor Company and named it “The Way Forward”. This plan aimed at turning around the losses and converting declining share value into profit making shares. Mullaly’s smart cost cutting measures helped the company make reasonable profits in the first quarter over two years. In 2006, Mullaly borrowed a loan of US $ 23.6 billion by mortgaging all assets of the Ford Company. He wanted to utilize the funds to act as a cushion cover to face an economic overhaul or any other unexpected set of events. He thereby helped the company towards its steady growth.

The loan taken at the appropriate time helped the car biggie from going bankrupt as against two of its rivals namely, General Motors and Chrysler which invariably went bankrupt during 2008-2009 on account of major economic crisis faced by the world around that time. Not only did he revive the position of his own company, he also put a legal petition against United States Congress to cancel the status of bankruptcy and suggested to provide the rivals with adequate Govt loans highlighting the plight the automobile industry would suffer had GM and Chrysler go bankrupt. In May 2009 when Chairman William Clay Ford Jr, who hired Mullaly said Alan was the right choice to be appointed the CEO of Ford and his decision is getting more right every day.

Some of the great quotes of legendary CEO, Alan Mullaly which youngsters can look forward to:

• When Alan Mullaly was being asked “How are you going to tackle something as complex and unfamiliar as the auto business when we are in such tough financial shape?"

• “An automobile has about 10,000 moving parts, right? An airplane has two million, and it has to stay up in the air”, came the reply.

In 2007, he presided over the sale of Jaguar cars and Land Rover to Tata Motors, an Indian car and truck manufacturer. The reason was he wanted to purely focus on the Ford brand as such. He declined his own earnings by 37% to safeguard the company from running into further losses and helping it come of economic downturn which was gripping the entire world very badly. On account of his stupendous performance with the Ford Company, and displaying very good leadership qualities, he was included in 2009 Times 100 list.

In 2011, Mullaly was named Person of the Year by the Financial times Arcelor Mittal. He was also named CEO of the Year by Chief Executive Magazine. In 2012, he was awarded a doctorate degree by the Kansas University on account of his mind boggling contributions to the automobile engineering and transportation industry. In the year 2012, Ford reported that Alan will stay with the company at least up till 2014. But as he is about to explore other roles he might step down his role as the CEO. This plan was further announced during the year 2013.

The aeronautical and car engineering icon stays within 3 miles from Ford headquarters at Dearborn, Michigan.

Alan R Mullaly was born on August 4th in the year 1945 in Oakland, CA. He is a native of the Kansas City. He is married to Nicki and the couple has five kids, who reside in the Seattle area. He is known to everyone about the skills he has like a pilot and in leisure times he loves playing tennis, golf and reading books.