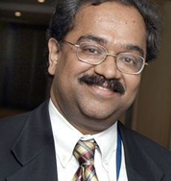 CMC has always been known for pioneering projects and we want to help bring technology to the masses...

With over 3 decades of excellence, R Ramanan is the Chief Executive Officer, Managing Director as well as member of the Board of Directors of CMC Pvt. Ltd. CMC is a subsidiary of global giant TCS (Tata Consultancy Services Pvt. Ltd).

CMC stands for Computer Management Corporation Pvt. Ltd. CMC was a Govt owned company during its inception. It was in the year 2001 the IT based company was privatized while Govt of India sold the concern to global giant TCS.

CMC is a Systems Engineering and Integration (SE&I) company offering its customers end to end solutions and services series from turnkey implementation of asset based solutions, application design and development and high-end engineering services. This can tell you the versatility of IT operations an allied subsidiary of TCS is engaged in. It is also into sophisticated business process outsourcing. Training and educations services from western countries are outsourced to CMC.

R Ramanan is a product of IIT. He did his B tech In Electrical Engineering from Indian Institute of Technology. The IITian pursued the course of study between 1976 and 1981. He joined TCS in the year 1981 and hence has more than three decades of experience in the IT industry. He took over as the Chief Operating Executive of CMC Ltd. when the Govt. subsidiary and the jewel organization was handed over to TCS in the year 2001. He was then elevated to a dual posting of MD & CEO in the year 2003.

Mr. Ramanan also has been the Non-Independent Executive Director with CMC limited since 2001, October 2001.

Under the leadership and guidance provided by the IT veteran R Ramanan, CMC won the Coveted Golden Peacock Business Excellence Award in the year 2013 in the Information Technology category. This glorious award was presented to Mr. Ramanan, CEO and MD of CMC by Mr. V Sudhir Vasudeva, Chairman and MD of ONGC (Oil and Natural Gas Corporation) and H E Syed Hossen who is the honourable minister of Commerce and Consumer Protection, Govt of Mauritius at a grand awards ceremony held at Burj Al Arab in Dubai UAE. This was in the midst of honourable leaders and policy makers. Ever since Ramanan took over CMC as CEO and MD, there was no looking back.

R Ramanan has also led the company into winning the National Award for Excellence in Talent Management 2013 at an award ceremony held at ‘The Grand Palace’ in Delhi.

His Journey with CMC

Several awards were bestowed to CMC ever since he took over the allied subsidiary of CMC in the year 2001. Moreover, this was made possible with the tremendous leadership and guidance provided by Mr. Ramanan, a veteran in the IT field.

He was not one of easy going persons but was a strong willed guy. Ramanan has led CMC’s rapid transformation from being a domestic Govt oriented organization to a global systems engineering and integration organization. Over 65% of the business is now coming from international markets.

He has thus brought a global prominence to the organization. He has made an express development possible by leveraging CMC’s indigenous technology and products. The firm not only focuses on products of national importance in financial services, insurance, public transportation, shipping, education, e-governance, and defence and energy/resources sector but is also able to gain foothold in international markets.

CMC’s idea is to work worldwide and fetch the advantage of Information Technology to perk up the efficiency of its clientele and the excellence of its customer’s products and services. CMC combines horizontal expertise in Information Technology with its vertical experience developed by working in a wide range of industries.

Under his guidance CMC has bagged key projects with NASSCOM. He has also brought about the emergence of a global reputation by providing the host of services in leading global organizations in mission critical services across all major international markets.

Under his guidance CMC has bagged key projects with NASSCOM. He has also brought about the emergence of a global reputation by providing the host of services in leading global organizations in mission critical services across all major international markets.

In North America, Ramanan leads CMC Americas. He is designated as Chairman and also serves the Board of Directors team of Tata Business Support Services Limited (TBSSL). Presently, he is a key board member in the New Zealand Trade & Enterprise -NZTE Beachheads Advisory Panel.

When CMC won the Golden Peacock HR Excellence Award in the first year it was introduced in the year 2011, Mr. Ramanan said “CMC is honoured to be recognized for its innovative HR practices. Golden Peacock award for HR excellence validates the company’s efforts to create world class people centric organization. Human Resources are a central focus to business strategy and awards like Golden Peacock take HR practice to the next level”

Another award bagged by Mr. R Ramanan and team was the Golden Peacock Business Excellence award. While receiving the award, the veteran spoke about the level of commitment and endeavour the company has towards providing excellent quality service to its customers and stakeholders and the award being true recognition towards meeting the same.

He emphasized the fact that bringing about a constant change is what signifies the journey towards excellence. A holistic change that leads to organizational development and sustained growth! He considers the recognition of an award towards business excellence as an impetus of the concern to becoming a world class organization by combining customer centricity and innovation with process and delivery excellence.

These golden words from an IT veteran are an inspiration to young grads aiming to work for the software or bring about changes in the society by aiming to become young entrepreneurs. He had a humble beginning but with efforts and sustenance he made it big. The award function was held in Dubai among honoured business leaders, jurists, academicians, environmentalists and policy makers.

Ramanan was featured as one of the most valuable CEO’s by a leading financial magazine named Business World. This is on account of his consistent performance towards the up-liftment of its customers and stakeholders ever since the company was acquired by TCS.

He was the only CEO to be honoured as one of the most valuable CEO among the top 10 candidatures twice in a row.

On a personal front, Ramanan resides in Mumbai with his wife and two daughters. He is an avid reader, literary, and fond of listening to music and writing poems. He indulges in these activities during his leisure time