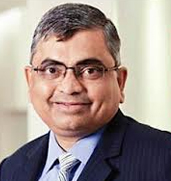 I firmly believe that emerging companies and start-ups are key growth engines for the future of IT industry ...

Krishna Kumar Natarajan popularly known as KK has been in the IT industry for the last 30 years to till now and ranked 28 on the 50 highest rated CEOs list published by Glassdoor. He is one of the co-founders of IT biggie known as Mindtree. Mindtree is a global information technology solutions company offering software products and consulting services, where he is currently the CEO and the Managing Director.

He was appointed as the esteemed chairman of NASSCOM. NASSCOM checks on the employment profile of various employees based on their academic credentials and company related achievements of each and every employee.

In case the employees are black listed by previous employers on grounds of sexual misconduct, misappropriation of cash, fidgeting of important documents related to the company, selling of potentially indispensable data of the company to a third party vendor, so on and forth, the same is recorded by NASSCOM and employees are black listed. Hiring companies look into the data before hiring prospective candidates into various IT and financial companies. Krishna Kumar, CEO of Mindtree was previously a senior executive at Wipro and alumni of XLRI.

Krishna Kumar graduated in the year 1979 as a Mechanical Engineer from the University of Chennai. He then went on to pursue his MBA from the most coveted XLRI, Jamshedpur.

He started off his career at Wipro and held several key positions during the period from 1982 to 1999. He grew from the trainee's level and went on to head the E-commerce and financial solutions division from 1996 to '99. He was a Group Vice President of Human Resources and Chief Marketing Officer of Wipro's IT business during that point of time.

In August 1999, Krishna Kumar along with 9 of his close affiliates went on to co-found Mindtree. In the initial years of having started the company, Mr. Kumar mainly focused on bringing IT business from major US patented companies. The business secured by him helped in building the organization. He then diversified operations expanding Mindtree's presence in Europe, Asia Pacific and Middle East.

His Journey with Mindtree

When he started off with minimum capital and just 10 members, the company has now grown by leaps and bounds. Under the able leadership and guidance provided by the cofounder CEO Mr. Krishnakumar Natarajan, the IT major has crossed revenues exceeding US$ 400 million. As a member of the Mindtree Board, KK is actively engaged in ensuring a high quality of governance. He has been involved in recruiting and bringing diversity to the Mindtree board, resulting in a highly valuable group of independent directors.

With an industry workforce of 11,000 employees and still counting is what makes up the magnitude of the human work force employed. Mindtree's consulting driven approach is what has driven the company to be one of fortune 500 companies on Forbes business list generated by the US economy.

Mindtree gives competitive and flexible delivery solutions to its customers and indulges in providing agile methodologies and expert frameworks. Having successfully run the Emerging Companies Forum for over 10 years, he feels that startup companies should expand its host of services across all segments including software products, internet and mobile. He is also keen to bridge the gap of cultural and gender diversity across all segments of entrepreneurship. A lot of female counterparts should be given a chance to hold a key position in the company is what the point to be noted here is.

Also as the Executive Chairman of NASSCOM, he plans to bring transforming changes to the company and aims at making the company 225 billion dollar industry by 2020.Mindtree gives its employees tremendous potential to be able to work to the best of their ability. It recognizes talent, and you are given employee benefits according to the work you perform.

KK, the co-founder of Mindtree and a veteran in IT services for over 3 decades, is also actively engaged in giving seminars and holding conferences at leading management schools worldwide.

Some of the major client wins acquired recently under his leadership:

With the inspiring and motivational guidance provided by KK, the cofounder of Mindtree, the company has bagged a lot of stable and steady business from leading computing companies across the globe. A few of them as follows

• Mindtree has signed up a 2 year contract with a leading company engaged in providing quality software services. It will provide support services for their developer tools and cloud business.

• A large multiyear contract has been signed between Mindtree and a globally reputed financial consortium. Mindtree will provide support services to their global business domain as well as human technology portfolio.

• Mindtree has been chosen as strategic partner for a human capital management software and services company based out of Europe. The IT biggie will be assisting application, testing, BI and infrastructure services.

• It has also been chosen as system integration partner for the world famous general vehicle lending company to build their next generation pan-European digital platform.

This way Mindtree is not only involved in providing sophisticated software and consulting services but is actively engaged in other versatile domains as well.

Thanks to the encouragement and support provided by the senior management under the leadership of an industry veteran like KK himself who gives an ever supportive and friendly approach towards running the business.

If you check on employee based feedback, most of them have specifically stated on the multitude of functionalities and verticals to which they are exposed to, in order to mold their competencies across domains and various segments.

The guy who completed Mechanical Engineering along with MBA at XLRI, like any other young career aspirant has done quite a lot for the IT industry including NASSCOM and several sister concerns to making the industry what it is today!

Mr. Krishna Kumar Natarajan is married to Ms. Akhila Krishnakumar, and the couple is blessed with 2 sons, who are named Siddarth and Abhirath. He is presently working from Global Village, in Bengaluru, Karnataka.