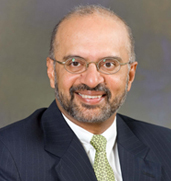 Our clients are always telling us that they see a new energy with our people, and that must mean that the culture is changing ...

Piyush Gupta is the Chief Executive Officer and Director of DBS group as well as the director of DBS Bank (Hong Kong) Ltd. DBS is a leading financial company in Asia with assets running US$ 3 million. It is headquartered in Singapore. However, it has more than 300 branches operating in 17 countries worldwide.

DBS has a solid presence as a financial player with over 4 million satisfied customers. The financial biggie also has got an amazing industry presence in Greater China, South East Asia and South Asia.

Definitely a mention is required on the number of awards bagged by DBS group as such. DBS was named "Bank of the Year, Asia" in 2012 by The Banker, "Best Bank, and Asia-Pacific" in 2014 by Global Finance and "Safest Bank in Asia from 2009 to 2013 also by Global Finance.

Before taking up the CEO's position in DBS, Piyush Gupta was the Chief Executive Officer representing Citi Group for South East Asia, Australia and New Zealand.

Piyush holds a Bachelor's Degree in Arts (Economics- Honors) from the Delhi University and an MBA from IIM, Ahmedabad. He started off his career with Citi Bank in India in the year 1982 and has held several senior management positions across Citi Group's corporate and consumer banking businesses. This includes heading the department of Strategic Planning for Emerging Markets and Regional Director for Global Transaction Services for Asia Pacific. He has represented Citi Group in countries like Indonesia, Malaysia and Singapore as well.

Piyush Gupta has bagged several awards in recognition of his career span. He was awarded the best CEO Leadership Achievement Award by Peter Seah representing DBS Singapore in the year 2013. He also has bagged many awards for attracting maximum foreign capital towards South East Asian Banks including DBS. DBS stands for Development Bank of Singapore.

His external appointments include serving as the Deputy Chairman of SPRING, Singapore. He is an esteemed member of the Group of Experts to the ASEAN Capital markets forum. He also belongs to the board of International Market for Finance, Washington. Likewise, his presence in the global financial markets is stupendous.

He is also an advisory board member of SimKee Boon Institute for financial economics. He is a council member of Association of Banks in Singapore. He is a notable Indian, who is so much sought after in an advanced nation like Singapore. He is a council member of Indian Business Leaders Round Table. Just look at how versatile the individual has shaped his career as. You name the designation, and he has it forming part of his portfolio.

His Journey with DBS

Piyush had substituted his 27 year career stint with Citi before he took over as the CEO of DBS. The job meant he had to literally run the business scholastics of one of the largest banks prevalent in Singapore. He wanted to create an impact on pace of running the business to what he commonly referred to as ‘loan shop'.

Unlike the two rivalries owned by Greater mainland China, which comprise of Overseas Chinese Banking Corporation and United Overseas bank founded by affluent Chinese immigrants way back in 1930's , DBS is relatively a younger institution.

Established in 1968 as Development Bank of Singapore, the aim of DBS was to help the newly formed independent city state which was separated from Mainland China. Ever since, DBS has been the emerging financial markets worldwide. There was a managing committee formed to lend loans to individuals, and the same was ever waffling on what to do.

This was when Mr. Gupta gained prominence. The management systems adopted by the bank were so outdated that the committee could not even assess whether running a particular branch was profitable or not. He took over the intimidating committee way back in 2009 when he took over as the CEO of DBS. Ever since he took over, there has absolutely been no looking back. He took over the committee and handled issues of digitalized banking which helped DBS achieve "Best bank of the year" award in December 2013.

He is responsible for bringing the concept of digitalized banking in Singapore. He has introduced a concept named ‘Home Connect' just about recently. The householder can simply hold his smart phone and scan the street and call up the latest transacted prices of nearby properties available on a map. This is how simple the technology works.The app also lets the user checkout nearby amenities, calculate mortgage repayments or connect to a loan officer right then and there. He wants to heal up the mainstay of Home Connect to meet the home shifting demands of young customers. The app also lets them calculate mortgage prices and rates of interest on acquiring an own property per say.

Ever since Mr. Gupta took over the Singaporean bank in November 2009 he has been instrumental in the growing overhaul effect of the bank. He has logged in 18 quarters of consistent growth enabling the quarterly earnings to increase to SGD 1.03 billion which is over 9% more than the previous year.

The 54 year old Citi Bank veteran has also impressed the Singapore market by adopting superb strategies towards executing wealth management, expansion activities in North Asia and lending to small-scale and medium sized enterprises. He has created a favorable impact on growth factor of DBS enabling better inflow of foreign funds including businesses from multinational clients.

Gupta has brought a collective sigh of relief to stakeholders which even 5 CEO's from the past decade could not achieve. Since the first year of his joining the company, many people were left wondering if he is one of those come and go CEO's. But he has stayed, and he has done well which is really one thing about the determined individual.

And there is more to him, and he has a long way to go!

Mr. Piyush Gupta is married and has two teenage children.