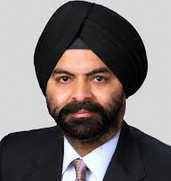 It's always difficult to nurture innovation, even in a non-staid company ...

We come across and read a number of success stories of professionals which motivate us and stimulates that ever needed motivational enzyme within us, and most of us do try and emulate the same in the path of success. One of the most well known financial analysts, Mr. Ajaypal Singh Banga who is very commonly known as Ajay Banga is presently the President and CEO of MasterCard Inc, the Worlds ubiquitous financial company. He had succeeded Robert W. Selander to become the CEO of Master Card on July 2010. He also became a member of the Board of Directors of MasterCard Inc with immediate effect.

While working with MasterCard, Ajay Banga will be responsible for the key business operations of the firm which also includes the global customer relations in the international as well the markets in United States. He is also responsible for the products, marketing, services as well as technology and operations of the firm. He is also a part of the Senior Leadership and Executive Committees of MasterCard.

Ajay Banga hails from a Sikh from Jalandhar, Punjab. His brother is a well known and one of the most popular business man by the name MS Banga. His father was an army officer and was posted in the same region during the time of his birth. He had spent most of his childhood within various cultures and regions due to the fact that his father was in the army.His father later retired as the lieutenant-general and was also decorated as the army general of Indian Army.

Ajay Banga has completed his Graduation, BA in Economics from the St. Stephen College, which is located in the Delhi City and later he had joined the IIM to complete his MBA.

Mr. Banga had initially started his career in the year 1981, as a management trainee with one of the most reputated companies, “Nestle", where his responsibilities included handling sales along with marketing and working with his General Management. Later he worked with Pepsi Co and was holding a responsible position where he was in charge for the international marketing. He had also spent 13 long years serving Citibank before he joined Master Card, where he was involved with the Citibank’s senior management which was located in the United States, Europe and several other countries. He played a very instrumental role in the launch of Pizza Hut and KFC in India.

Mr. Ajaypal S.Banga, who is now acting as the director of The Dow chemical company since February 19, 2013 is named as “Most Powerful Indian" in the world. Mr.Banga, who was graduated in Economics Honours from The Delhi University has a keen interest on social development issues. He is a trustee for many organizations like Asian society, The New York hall of science. He served as Chief Executive officer and president of master card incorporated since July 1, 2010 and august 31st, 2009. He has also taken up position as Chief Executive officer and President of Modex International from August 31st 2009 to July 1st 2010.

Before taking up these positions Mr.Banga provided his services to Citigroup Inc for 13 years in several positions as Chief Executive officer for Asia pacific region(Citibank Singapore)Chairman of the Board and also chief executive officer for global consumer group (Canada) from august 2005 to 2008.He served Citi bank at Asia pacific region until 2009 by carrying out his responsibilities which include wealth management, consumer banking, institutional banking, alternative investments, credit cards, retail banking in Asia, Europe, Africa, Latin America and also Mexico. He also served as Head for International consumer Business at New York for Citigroup Inc till August 2008.

He has taken up responsibilities like servicing and technology for all real estates, commercial leasing, student loans being as the Executive vice president of Global Consumer group and President of Retail banking at Citigroup and North American Bank since 2002. From 2000 to 2002 Mr Banga has taken up responsibility as Business Head of Citi Financial and The US consumer assets Division. He also served as division executive for consumer bank in countries of Central and Eastern Europe, Middle East and India from 1998 to 2000. He is a multi talented human who has served in almost all positions and handling all assignments in sales, marketing, and general management for 13 long years. He spent two of his valuable years at Pepsi where he launched a food franchise in India. He was a business sponsor of Citi’s African heritage network, and also took up position as director of Kraft Food Inc and as chairman for Us-India business council. He also took the honour of being a member of Council on foreign relations, the international advisory board which is at Moscow, and the list goes too long to discuss. He was honoured with the prestigious foreign policy Association medal in 2012, and is also a member of the Foreign Policy Association.

His Journey with Master Card

Ajay Banga was announced as the CEO and President of MasterCard Inc in the month of July 1st, 2010. Once Mr. Banga took over the charges as the CEO, his vision was very clear, which is to chase down all time competitor of MasterCard, which is Visa. This came at a time when both the networks were at a huge benefit from the shift of customers towards the use of plastic.

He later worked with some of the best clients in order to get the youth to use more debit cards. As a result of the same, he went ahead to redesign the debit card as a product which included a lot of features and by connecting it to music, he had created all new marketing approach for the Commonwealth Bank of Australia. After these had been launched, the results were above expectations.

He had later paved way for the younger lot in the MasterCard lab who would develop some innovative ideas which are embedded to the clients. This was one way to build, a new innovative way for banks and merchants, where their cards can be used to pay for various services as well as goods. For such example of innovation is to read the bar code from the smart phone the purchaser carries and convert the same into a purchase.

Ajay Singh Banga was born to a Sikh couple who resided in Khadki, which is located outside Pune, Maharashtra, India. He is married to Ms. Ritu and is blessed with two daughters.