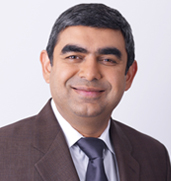 Humbled to lead @Infosys an iconic pioneer in IT ...

Vishal Sikka, now known to everyone as the new Chief Executive Officer as well the Managing Director of Infosys, is the first non-founder CEO of the company. A Punjabi by birth, Vishal Sikka was also a member of the Board of the SAP AG as well as on the Global Managing Board and headed the operations of the SAP products and innovation. Later, he left SAP AG due to personal reasons in the year 2014 and few months later was announced as the new CEO of Infosys on the 12th of June 2014.

Mr. Sikka is known to be the highest paid CEO of Infosys so far with an annual compensation of about 30 crore and also stock options worth $2million.

Vishal Sikka is also the influential advocate of the SAP's new in memory database technology called HANA. He also was an active member in the development of HANA after his appointment as the CTO with the needed support from Hasso Plattner.

He is very well known in the Silicon Valley and is also close to Hasso Plattner, the founder of SAP. He is also known to be an avid blogger and is also quite active on Twitter with about 14,000 followers. His personal blog is very interactive and interesting. His blog was named as the Timelessness, and in his very recent post he talks about the "two extraordinary transitions" which have taken place in his life-of leaving the company SAP and joining Infosys Ltd. He also stated that joining Infosys as something he foresaw after he had quit SAP in the month of May.

Vishal Sikka was born in the state of Madhya Pradesh to a Punjabi couple. He was born on the 1st of June in the year 1967. His mother was a teacher, and his father was an engineer with the railways. At the age of six years, he moved with his family to Baroda. Vishal Sikka moved on from Rosary High School and joined The Maharaja Sayajirao University of Baroda for his Bachelors course in the stream of computer science. He also discontinued his course to join Syracuse University in New York, and he received his B.S. as well as M.S. in the stream of computer science from the same university. Mr. Sikka completed his PH.D. From Stanford University in 1996 with the dissertation title Integrating Specialized Procedures into Proof System. He is a famous person of Silicon Valley and very close to the founder of SAP.

On June 12, 2014 Infosys, India's third biggest IT benefits exporter, named Dr. Vishal Sikka as its Chief Executive Officer and Managing Director. Like each fruitful individual, Sikka rose to the main one stage at once. Mr. Sikka is also known to be an avid blogger and has more than 14,000 followers on Twitter.

Dr. Vishal Sikka served SAP AG with various roles from May 30, 2007 to May 4, 2014. On May 30, he has taken the responsibility of CTO and then he served as a Member of Executive Board from February 7, 2010 and later served as a Member of Global Managing Board at April 2012. He founded the Bodha and took the responsibility of CEO, President and Chairman Of the governing Board. He has a worldwide obligation regarding advancement and conveyance of all items over SAP's item portfolio including Applications, Cloud, Analytics, DB & Technology and Mobile. He was in charge of heading the configuration and end-client experience for SAP, and was in charge of driving all advancement all inclusive.

Mr. Sikka headed the improvement and conveyance of SAP's achievement in-memory stage, SAP HANA, and he keeps on drilling HANA as the establishment and stage for SAP's whole portfolio and also the most extensive biological system of clients and engineers. He supervises SAP's engineering stage, cloud operations, associations, client co-development & improvement, SAP Ventures, and brooding of rising organizations. He was also responsible for the architecture of all products and Infrastructure as a Sr. Vice President and Chief Software Architect at SAP. He also served in Platform Technologies as an Area Vice President with the responsibility of architecture and integration of application development.

Dr. Sikka was at Xerox as an individual in their Palo Alto research laboratory. He has broad expertise with web, assortment and circulated e-trade examination utilizing information and learning based advances mostly. He has been the whole time Director of Infosys Ltd., since Flag Day, 2014. He served as Member of board of the Coghead, Inc. since October 2006. He holds a Doctor of Philosophy in code engineering from Stanford and placed within the SAP workplace in California.

His Journey with Infosys

Vishal Sikka was appointed as the new CEO of the Infosys Ltd. and he was on a learning curve at the company and is presently operating from California where stays with his family. He would continue to stay in California and would travel to Bangalore, India whenever required. He had joined Infosys on the 12th of June of 2014. He always felt pride in leading a company which shaped the IT Industry in India and as a company; Infosys always laid emphasis on learning and education. "I compliment Infosys for its deep understanding of value and learning ability that I intend to continue learning about Infosys, its technology, employees, clients and all stakeholders," he said in a first media interaction after he was appointed as the CEO of Infosys Ltd.

Mr. Sikka is also the first non-founder CEO of Infosys and Managing Director. He had taken over his duties from the Chief Executive SD Shibulal, who was one of those engineers who founded Infosys. He was also named as the whole time Director for the Board and the CEO and MD of Infosys on the 14th of June. He was given $5.08 Million (30 Crores) as his annual compensation and the stock options given worth $2 million.

Vishal Sikka was also known for this commendable job of slashing the expenses in the firm and increasing the margins. He also had to deal with the loss of the top talent which existed in the firm.

Mr. Vishal is married and stays with his wife and children in California.