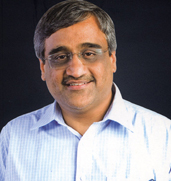 It is not so easy to get people in smaller towns to spend money, but they still come to the store, all dressed up with their families. It's an outing for them ...

Kishore Biyani, who was born in a small trading family, emerged as the India's retail czar. Kishore Biyani is the CEO of the Future Group as well as the Managing Director of the Pantaloon Retail group. He is one person who has replaced the conventional wisdom with the guts and instincts in order to create the Future group which is a $ 1 billion company which includes the well known Pantaloon Retail, which is a department store group, the Big Bazaar, a company's name which is got famous for their chain of hypermarkets, the Food Bazaar and the Central Malls across the nation.

Kishore Biyani is known for his insights into the consumer behaviour in the Indian market; he also represents the enigma to the emerging players of the country. Popularly known to the Business world as KB, he was written off by the media in his initial days for his unconventional style of the business. All his stories were written off being termed as “dirty”, and he was also not included in any trade meetings or the conferences of the investors. He had then taken a step and challenged the mindset of one and all which was very conventional by thinking big.

Mr. Biyani is a very strong believer in the motto of his corporate group, 'Rewrite Rules, Retain Values,' he considers that the Indianness is the core value which is driving the Future Group. He had very recently launched his book titled, It Happened in India: The Story of Pantaloons, Big Bazaar, Central and the Great Indian Consumer, which was co-authored by Dipayan Baishya. The book had sold about 100,000 copies which are more than any business book which was published in India so far.

Kishore Biyani was born on the 9th of August in the year 1961 in Mumbai. He was born in a small trading family. Mr. Biyani has completed his Graduation in commerce from HR College of Commerce, Bombay and he also holds a Post graduate diploma in Marketing Management.

Kishore Biyani was born in a small middle class family and started his career by selling the stonewash fabric to the small shops in Mumbai. Years later he started establishing his own businesses by launching the shopping malls like Pantaloons, Big Bazaar, Food Bazaar and The Central where he made every attempt to capture the each penny from the pockets of the Indian customer, and he was highly successful in doing so.

Mr. Biyani does not only concentrate on the retail but also aims at capturing the entire consumption space of the Indian market.

Mr. Kishore Laxminarayan Biyani, PGD founded future Group and Future Supply chain Solutions Ltd. and serving as the Group Chief Executive Officer. Big bazaar has also been founded by him and he has been working as the managing director of Future Retail from 1st April, 2005. He had also been the managing director of Future ventures India limited from February 5, 2008 to May 31, 2013.

He also is contributing as a Managing partner as well as Chairman of Indivision capital fund. Also he is a heading the board of future media India Ltd. as its chairman. Till September 29, 2012 he was the chairman of the board of capital First Limited.

Till September 28, 2012 he worked as the non-executive chairman of Future Capital Holdings Limited and also worked for Pantaloon Retail (India) Limited as its Chairman. Since February 28, 2010 he has been independently holding Fame India Ltd as their director. He has also been the director since October 8, 2007 for Future Consumer Enterprise Limited. From May 31, 2013 he also has been serving as the Vice chairman of Future Ventures India limited. He also works as an Executive Promoter Director for Pantaloon Retail (India) Limited.  Kishore Biyani also works for Future Group and Retail limited as a director.

Since June 2, 2010 he has been holding Embassy property developments independently as a Director. Since July 22, 2005 he has been the director of Ambit investment Advisory Company Limited. He also worked for Galaxy Entertainment Corp. Ltd, as a Non-executive and non-independent Director till August 11, 2011. He was the Director of Capital First Limited from September 5, 2006 to September 20, 2012. At Jagran Prakashan Ltd he worked as an Independent Director from November 18, 2005 till January 31, 2013. Till November 6, 2008 he worked as an Independent non-executive Director of UTV software communications and alters on as its additional Director till January 25, 2007. Since January 2005 he served as the Director of PIL industries limited. In the field of manufacturing, marketing and retailing of readymade garments he has 25 years of experience. He has been rewarded with the awards like CEO of the year (2001) and titles like Most admired Retailer of the year (2004), Retail face of the year-Images retail awards (2005) and also E&Y Entrepreneur of the year-Services (2006). He is basically commerce Graduate and also holds a post graduate diploma in marketing management. He did his bachelors from HR College of Commerce Bombay in commerce.

His Journey with the Future Group

The journey of the CEO and founder of the Future Group, Mr. Kishore Biyani does stimulate some motivational enzyme in anyone who reads it.  He believes in the credo of the Future Group, 'Rewrite Rules, Retain Values.' The empire of the Future group is led by the Pantaloons Retail, which today operates in about 16 million square feet of the retail space and is spread across 85 towns and cities as well as 65 rural locations within India. The company employs around 35,000 employees and is also listed with the Indian Stock Exchange.

Future Groups implements the multi retail strategy, and some of its leading formats are the Big Bazaar, Central Food Bazaar, Ezone, Pantaloons, Planet Sports and Home Town. They also operate the most popular Indian online shopping portal which is futurebazaar.com. The rural chain Aadhar also belongs to the Future Group.

The present food chains of this group which are operating across several cities and towns in India are Food Bazaar and FoodRite. Foodhall is another food store which has been launched, and it aims at targeting the urban Indian consumer, and the group wants to experiment with the imported food products.

Another venture of the Future Group is the Future Fresh which is into the supply of Fruits and Vegetables and these are sourced from various other countries from New Zealand to Canada.

Kishore Biyani is known to be an elite food futurist and also has a conventional way of thinking, and has very recently sharpened his thoughts on the food space.

Mr. Biyani is married to Sangita Biyani and the couple is blessed with 2 children are presently based in Mumbai. The elder daughter Ashni is the director of Future Ideas, which is the group's innovation and incubation cell.