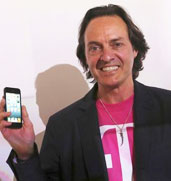 We’re a smaller company and trying to have a little fun and get a message and see how it resonates with some of the consumers ...

John J Legere is the American businessman who is known to one and all as the CEO and the President of the T- Mobile US. T- Mobile is the fourth largest cellular carrier. Commonly referred to as the most dangerous man in the wireless industry, John Legere has helped T-Mobile witness its first ever highest customer growth in just four years. As per the statements of Jon Legere, T-Mobile always wanted to be the cool wireless carrier for the hip people.

John Legere had always tried to portray himself as an outsider among the executives in the telecom industry. He had let his hair grow; he swapped suits as well as ties for his coloured T-shirt, his jacket and his jeans with hipster sneakers. The implied image after this effort was that of an average guy. Behind this outfit was the person who can easily compete with the best of the executives in the telecom industry. He was described as the determined and the purposeful person who wanted to climb the ranks as quickly as possible.

The T-mobile US boosts of about 45,000 employees, the average age of whose is about 30 years. Most of the employees are the excited group of people who always wanted to be different. John Legere is known to be the most suitable for this position and one of the first policies he had to change after he had taken over as the CEO of this firm is the outlawing of the tattoos and the piercing. The job at T-Mobile brings the present CEO back to the place he has started. He had first known to have worked with the telecom company New England Telephone and later spent 2 years after that for raising the ranks at the A & T.

It can be stated that John Legere indeed has a unique strategy of running the telecom giant as he had succeeded in gaining the attention of even those who are not the customers of T-mobile US. It can be stated that his efforts are paying off. As per the reports of the company’s earnings, T-Mobile had already added 4.4 million customers from the previous year, and its revenues rose by 39%. This proves that the popularity pays off, and John Legere has convinced customers to switch to the everyday low plans offered by T-Mobile.

John Legere was born in the year 1958 in Massachusetts. Mr. Legere had completed his graduation from St. Bernard's Central Catholic School, which is located with Fitchburg. He was aspired to become a gym teacher and later he realised what he would be paid as a gym teacher, he decided to study business. He then completed his bachelor’s in Business administration from the University of Massachusetts and later went ahead to complete his Masters of the Science degree from Massachusetts Institute of Technology along with a Masters in Business Administration from the Fairleigh Dickinson University. John Legere has also completed the Program for Management Development from the prestigious Harvard Business School.

His Journey with T- Mobile

John Legere was named as the Chief Executive Officer and the President of T- Mobile US. He has taken the place of Philipp Humm. Mr. Legere took over then position when the US carrier, then in its 4th position was struggling with customer defections which was seen more with the contract customers of T-mobile. Mr. Legere is said to be implementing some bold as well as strategic initiatives to help improve the company’s position in the market and also expand its network coverage.

At that moment, T-mobile was the only US carrier without an iPhone to sell to its customers. At the moment T-mobile, under the supervision of Mr. Legere is trying to conquer market a of 3G and make their services more adaptable with iPhone. They are also planning to come up with cheaper plans to encourage the customers to switch from other carriers to T-mobile.

John Legere has also shown his cost cutting skills during his tenure with Global Crossing, and thus T-Mobile also hopes to see some of his cost cutting charms. T-mobile has also very recently stated that they are going to pay early termination fees for those customers who switch to T-Mobile from other service providers. They have also slashed the subsidies for the smart phone users. The company also has entered a deal with Apple Inc and planning to modernize their network and including a faster LTE at the same time.

John Legere was born in the year 1958 in Massachusetts. He had later finished his studies from Massachusetts. Known to be calm, cool and collected person, he had achieved great heights after spending almost a decade with the firm Global Crossing. He is known as a person who would push boundaries and a person who is capable of cracking jokes while in his pink tee shirt and taking his staff through the company’s plans.

John Legere is also national level competitive runner who used to and still takes part in corporate challenge events with his employees in order to promote team spirit and community.