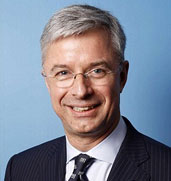 Our decision to increase the amount of cash we are returning to shareholders is indicative of our improved cash position ...

Hubert Joly is the present Chief Executive Officer of Best Buy, an American multinational consumer electronics corporation. Its headquarters are situated at Richfield, Minnesota. It has its branches all over the world in countries like the United States, Puerto Rico, Mexico, Canada and China. Best Buy is now an expanded company with its subsidiaries and dealings under different areas. Hubert was the former President, CEO and former director of Carlson.

Hubert Joly is a personality who believes that any person needs to approach problems from different angles in order to be successful. He also believes in the importance of being able to make some plans both in the long term as well in the short term. Mr. Joly also believes that it is very necessary to have a proactive approach when it comes to business.

Best Buy was named "Company of the Year" by Forbes magazine in 2004, "Specialty Retailer of the Decade" by Discount Store News in 2001, ranked in the Top 10 of "America's Most Generous Corporations" by Forbes in 2005 (based on 2004 giving), and made Fortune magazine's List of Most well-liked Companies in 2006.

His Journey with Best Buy

Joly is the present CEO of the company and is in association with it from the past 2 years. He, with his experience in various sectors with various firms stands as a challenging and intellectual competitor for the related companies all over the world. He has brought the company’s standard to different heights. He was successful throughout his 15 years of career in business fields in association with many emerging companies. He is also successful in making justice to his job as the CEO of Best Buy since when he was given the responsibility.

It is also said that Hubert had spent his initial days with the company working as one of the salespersons and he had thus completed the basic sales training which was required. He stated that the last time he worked in a store in the year 1975 and he wanted to learn the business from the frontline rather than from the head quarters. This statement was made before the company hit the headlines of the share price of a company hitting a nine year low.

Later in the month of November, Hubert placed his vision for the company and he then also had a new offer from Richard for the company’s ownership. This was the time when Mr. Joly made several announcements and one of them was the company’s move into the service provision. He later took a bold step by posting the losses of the previous year which was then stated to be $1 billion but yet there was no reduction of the store employees. He went ahead to say that the company would now focus more on the ecommerce business and this goal was to increase the share price of the company by about 7 % to 18%.

Hubert Joly was also responsible for the company’s international business which provides up to 25% of the company’s revenue. But he also stated that they are falling behind the sales in the United States itself. After the end of that financial year, there was a significant rise in the share price of the company and it was estimated to have increased by 15%. This hence led to various announcements which stated that a complete financed offer has been replaced officially by Richard.

He humorously said, “We care for our employees and so we fire them”. This shows his dedication and faithfulness towards his company. It also proves that he is sweet to the sweetest and tougher to the quirky ones. He is an honest and dedicated CEO of the company who believes in this own approach of problem solving.

Hubert Joly aged 55 was born and was also raised up in France. He is presently known to be residing at Richfield, Minnesota in the United States of America. When away from his work role he enjoys to spend time skiing and is involved with the local community and also acts as the Treasury of the Minneapolis Institute of Art.