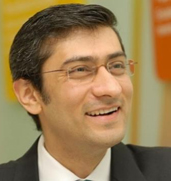 We will be open to the opportunities....

Considered as a dynamic self-starter, a staunch salesman and someone who "doesn’t beat about the bush”, Rajeev Suri - The current President and the CEO of Nokia which is one of the most emerging multinational communications and information technology corporations around the globe with its headquarters at Espoo, Finland. He has demonstrated aptitude to form strategic precision, drive modernization and augmentation, ensure disciplined execution, and deliver results. Nokia provides many communication and internet services, media downloading, applications with its own operating system and messaging services such as free messaging and navigation access. It also provides telecommunication services under Nokia Solutions and Networks. As on 2013, Nokia employed 90,000 employees across 120 countries and sells its products over 150 countries and has annual revenue of €12.7 billion. Rajeev Suri was appointed as the CEO of the company in May, 2014. Before that, he rendered his services to its subsidiary, Nokia Solutions and Networks as its CEO.

Rajeev Suri replaced Stephen Elop and has also become the second Indian to assume the corner office at one of the giant multinational firms. With his achievement till date he has now joined the elite club of those Indians who are heading global firms which also include the chairman of Pepsico Indra Nooyi, Anshu Jain of Deutsche bank and not to mention the CEO of Microsoft Satya Nadella.

Mr. Rajeev Suri is also one of those personalities who have made it big without any MBA or PG degree. Mr. Suri is also responsible for cutting costs of the firm as well as reducing the number of employees as well as for increasing the sales. He also has his focus on the five target markets and took place after the giant NSN had declared very huge losses in the same year.

Rajeev Suri was born on October 10, 1967 and is 46 years old now. His parents are Yashpal and Asha; they are based in New Delhi. They moved to Kuwait in 1958 and there Rajeev’s father had a motor car imports business and Rajeev was raised till the year 1985 there at Kuwait. He holds a Bachelor’s Degree in Electronics and Communication from the Manipal Institute of Technology, India.

Mr. Rajeev Suri is currently living in Finland where the headquarters of Nokia is located. Rajeev is also known to be a vivid music lover and fitness enthusiastic which makes him to spend most of his leisure time in the gym.

He has more than 23 years of international experience. His leadership qualities cherish and transform the assignments into profitable and increase the turnarounds. He played several roles in managing the company such as strategy management, production, sales, marketing, advertising the products and many other important roles. Mr. Suri is one of the pillars of Nokia, which make the company stand up as emerging and most developed telecommunications company in the world.

His Journey with Nokia

Rajeev Suri joined the Nokia group in 1995. He has been instrumental in driving the company’s revenue growth from less than a third to about half and also increased the unitary revenues of its subsidiary, Nokia Solutions and Networks. The company created a new Services Hub in India with his motivation. He headed the Asia Pacific operations from April 2007 until November 2007. He worked for the company on a number of assignments such as Business Development, Marketing, Sales and many others since 1995 till 2007.

In October 2007, he became the CEO of NSN after Simon-Beresford Wylie merged Nokia Networks and Siemens Networks. He efficiently managed the joint venture and was named as a “turnaround specialist” in the global tech markets.

On November 23, 2011, it was announced that the company planned to eliminate about 17000 jobs by the end of 2013 so as to efficiently manage NSN’s mobile broadband equipment which was the fastest rising sector of the market by then. This slashed the company’s workforce by 23 percent. After the acquisition of Motorola’s equipment in July 2010, the company increased its purchases by $1.2 billion. This step also helped the company to trim its expenses by $1.35 billion by the end of 2013. Under the guidance of Rajeev, the company was considered one of the biggest turnarounds around the world.

On May 01, 2014, Rajeev Suri was appointed as the CEO of Nokia. After this, Nokia sold its phone division to Microsoft Mobile and also acquired full control over NSN. Rajeev, without any MBA/PG degree, is one of the rare top corporate executives who manage the company and achieve great heights.

He also has aims to target the investment of the firm in the three major areas like the technology needed for smart cars, cloud based services which can be used for personal mobility with location intelligence and location based analytics which is helpful for better business decisions. He also aims at improving the portfolio of Nokia by expanding the licensing program of their successful intellectual property, to help other companies as well as organisation with the breakthrough technology innovations from Nokia and finally by exploring new technologies which can be put to use for future services, as well as products.

Rajeev Suri based at Espoo, Finland. This is also a place where the headquarters of Nokia is established. He was married to Nina, who is the founder of the Nastrac Group, an executive search business. They are blessed with two sons: Ankit, 20, and Anish, 17. His elder son is currently learning music composition at Boston while his younger one is studying at Singapore. They are all recognised as global citizens. Rajeev lived in 7 countries till now which include India, Kuwait, Finland, Nigeria, UK, Germany and Singapore.