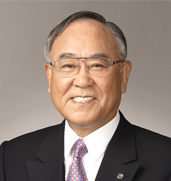 The world is facing a new networked, digital lifestyle, and we will ensure that Canon remains ahead of the game ...

Blessed with an inimitable blend of eastern and western managerial approach, Fujio Mitarai is the present CEO and Chairman of Canon, one of the leading manufacturing companies of imaging and optical products which include cameras, camcorders, photocopiers, computer printers, etc. The headquarters of Canon are located at Ota, Tokyo, Japan. Canon was founded in the year 1937 by Takeshi Mitarai and his 3 other partners. It was first named as Precision Optical Instruments Laboratory and later was changed to the name, Canon.

Fujio Mitarai had joined the Canon Company in the year 1961 and was later transferred to the Canon USA and he was one of the seven employees working from that office. He then remained in North America till 1989 and served the last ten years as the President as well as the CEO of Canon USA.

Fujio Mitarai played a very integral role in the release as well as the development of a number of popular and innovative camera’s and some of them include the Canon AE-1 that can be named as a legendary development which came across in the year 1976. The others include the EOS System which was developed in the year 1987 and the ELPH, which was an advanced photo camera, in the year 1996.

Canon introduced its first 35mm camera between 1933 and 1936 which was named as ‘Kwanon’ and then in 1940, it developed Japan’s first X-Ray camera. Canon gradually grew as one of the leading multi-national corporations around the globe. Fujio Mitarai continued the reign of his uncle, Takeshi Mitarai and is the present Chairman of the company.

Fujio Mitarai was born on the 23rd September, 1935 in Kamae, Oita (the present Saiki). He is 78 years old now and is rendering services to Canon. He was graduated from the Chuo University with a Bachelor’s degree in Arts in 1961. Unlike his three brothers who were into medicine, he followed his father’s footsteps and also aimed at going abroad though he knew only Japanese by then. Soon after his graduation, he joined his uncle’s company, Canon in May, 1961. He married Chizuko and blessed with two children. Unfortunately, his wife was deceased in 2002.

He commenced his career as an accountant in 1961 and worked for the same post till 1979. He was then agreed as the President and CEO of Canon in USA. Later in 1989, he became the managing director of the company. In 1995, he was made the President of the company after his cousin, Hajime Mitarai, the former president. From 1997 onwards he is rendering his services to the company as the CEO.

Fujio Mitarai is the present Chairman and CEO of Canon, one of the leading producers of imaging and optical products worldwide. Canon was founded by Takeshi Mitarai, Fujio’s uncle along with 3 other founders. Fujio developed the company which was into losses till he entered the company. He introduced new management techniques and also introduced the cameras with a fusion of the Japanese and the Western style. He also plays a splendid role in the over-all development of the company.

He was recognized as a Good Corporate Citizen who contributed for the Realization of a Better Society. He was awarded the Person of the Year by Photo-Imaging Manufacturers & Distributors Association in 1998. He was also named as one of the world’s top 25 managers by Business Week in 2001. He is also one of the highest paid CEOs around the world with an annual compensation of $1,105,000,000 (as on 2013).

As on March 17, 2014, he was appointed as Honorary President of Tokyo, 2020 while seven women were already added to the previous All-Male Executive Board. As on April 23, 2014, the company has successfully completed the acquisition of Molecular Imprints Inc. and changed its name Canon Nanotechnologies.

As the CEO of the company, Fujio helped it launch many cameras and expanded the produce of the laser printers in America. He observed that many of the company’s units were running in losses in Japan and closed all the non-profitable units which made the company acquire resistance and was able to carry on its business further without dissolving it.

He joined the company as an accountant in 1961 and gradually grew to the position of the Chairman and CEO of the company till date.

Five years from his joining, he was transferred to America by his uncle, Takeshi and appointed as its President. This step brought the company to the level of competing with the already leading companies, Nikon and Pentax. These two companies were dominant in the produce of cameras in the US. By then, Mitarai was one of the seven employees of Canon headquarters at Manhattan.

Mitarai had spent 23 years in the United States and brought many changes in the working of Canon’s sales and purchases. He developed the business by closing the unsuccessful units, thereby, bringing the company’s profits back into its bank. Canon also launched many new products under the leadership of Mitarai such as the Canon AE-1, which was launched in 1976, was the first 35mm camera with automatic exposure. In 1987, Canon launched the EOS (Electronic Operating System) auto-focus camera. In 1984, Canon joined with Hewlett-Packard, with Canon producing the laser and colour printers and HP providing the software and marketing for the same. In 2001, Canon released the high speed digital photocopiers.

Canon as a company today has more than 11,000 employees who work at more than 30 facilities at various locations as North and South America, as well as Central America. They also have their offices located at the Caribbean.

Mitarai expanded the scope and business of Canon with his outstanding management techniques and which was named as the “Mitarai Way” of managing things by his colleagues. Mitarai mainly focused on the profitability rather than on expansion of the business. He stopped production of unsuccessful units such as PCs, typewriters, etc. With the same strategy, he increased the sales by 40 percent as on 2005. At the same time, he also started three factories at Japan focusing on the expansion of the business operations. Thus, Mitarai has been striving a lot for the growth along with the profit-earning of Canon and has been successful at his strategies till now and will continue to be the same till his reign continues!!!

Fujio Mitarai is a Japanese national and married Chizuko who had taken her last breath in the year 2002. The couple has two children.