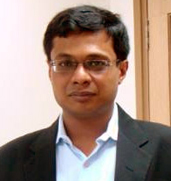 Flipkart is a technology company that tends to do e-commerce, we have built in-house technology instead of sourcing it ...

Sachin Bansal is the Co-Founder, Chairman and CEO of the emerging e-commerce Indian company, Flipkart. He established Flipkart in 2007 along with his brother Binny Bansal with its head quarters at Bangalore, Karnataka. Flipkart is an online trading company which offers a wide range of products such as electronics, food, clothing, etc. The products range from different brands of worldwide and are available at cheaper rates when compared to other online shopping sites. Flipkart also launched its own variety of products such as pen drives, headphones and other computer accessories naming them under "DigiFlip".

Mr. Bansal, being the CEO of the company strives hard for its development as one of the top most online shopping companies with a million subscribers all over India. Before establishing Flipkart, he worked with Amazon.com India branch in 2006.

Sachin Bansal was born on July 6, 1976 and is 37 years old now. Chandigarh being his native place, he went to the Indian Institute of Technology (IIT), Delhi and graduated in computer science from there in 2005. It was there where he met Binny Bansal, his co-founder as his stream was also computer science.

Soon after his graduation, he joined a company called Techspan and later in 2006, he joined Amazon and worked for its Web Services division. Apparently, it happened that Binny also joined Amazon at the same time and they both met each other again. They developed an application called Amazon S3 which helped them to lay the foundation for their former company, Flipkart. From then, they started developing their idea of starting an online trading company in India too with exciting offers and attracting features in their website. Meanwhile in India, online shopping was not famous and not many of Indians were of it.

Sachin Bansal is the Co-Founder, Chairman and CEO of the e-commerce firm, Flipkart. He, along with Binny Bansal, his Co-Founder, started the company in 2007 and at present, Flipkart is one of the top 10 online shopping sites in India.

Mr. Bansal was awarded the Entrepreneur of the Year, 2012-2013 by Economic Times, a leading Indian economic magazine. At CNBC TV 18’s “India Business Leader Awards 2012”, Flipkart was awarded as the Young Turk of the Year. The company was also nominated for IndiaMART Leaders of Tomorrow Awards in 2011. Flipkart also stood second in the List of Cheapest Mobile Store, 2013. Flipkart, now, is recognized as the biggest online bookstore in India. Sachin was also nominated in the Regional Emerging Entrepreneur Awards, 2011 by CII in association with Business Line.

Sachin, being the CEO of one of the fastest emerging online shopping firms, is also a game freak. In spite of being a busy entrepreneur, he likes to spend most of his free time with his family and gaming.

Sachin Bansal founded the e-shopping store, Flipkart in the year 2007 along with Binny Bansal. He is now the CEO and Chairman of the firm. They started the firm with a mere investment of Rs.4 lakhs and expanded it to a position of generating a huge amount of Rs. 1.5 Crore a day.

Flipkart was started with both the partners investing 2.5 lakhs each. The first office was in a two bedroom apartment which was located in Koramangala. One of the rooms was then converted into office. They started the business by tying up with the distributors of the major publishers who were located in Bangalore and for close to three whole months, it was just two people who were running the show.

Now headquartered in Bangalore, Flipkart now has more than a thousand employees and the journey so far from the time it was started was incredible.

As the CEO of the company, Mr. Bansal takes care of all the customer-related activities of the company right from the availability of the product-in-demand to marketing of all the products on the website. He takes charge of all the finance and legal divisions of Flipkart. He also takes care of the development in the appearance of the website as his graduation base is of Computer Science, and he also concentrates on attracting all sections among the customers.

Flipkart is expanding at its own grounds day-by-day making its founders being recognized as one of the millionaire entrepreneurs in the world. They also come under the list of young CEOs around the globe. Flipkart has risen its annual funding to $200 million from the existing investors including Tiger Global, Iconiq Capital and Naspers.

However, the journey of Sachin with an investment of Rs. 4 lakhs to earning an amount of Rs. 1.5 Crore a day is amazing and shows his dedication and hard-work towards the expansion of the firm. In just four years of its establishment, the company was able to sell about 15 different varieties of products per minute shows the founders’ hard-work. They humorously say that it’s been a year and a half that they drew their salaries.

Sachin Bansal was born in the year 1976 on the 6th of July. He is a software engineer as well as an Internet entrepreneur. Sachin Bansal hails from Chandigarh, the capital city of Punjab so does his partner Binny.

Sachin is known to have a lot of enthusiasm in gaming and also loves to spend most of his leisure time with his family and friends. His partner Binny is known to be his childhood friend and both Sachin and Binny went to the same schools and studied at IIT Delhi together. That was when they got to know each other well. Binny is always considered like family by Sachin Bansal.