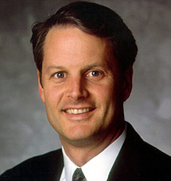 EBay and PayPal we believe are stronger together than they would be apart ...

John Donahoe is the President and CEO of eBay, one of the leading online-trading sites. As a CEO, Mr. Donahoe is responsible for the growth the company as a leading trading hub and developed its major business units such as eBay Marketplaces, PayPal and Skype. He mainly focused on eBay’s core business which is online buying and selling of various products, which form a major part of the company's revenues. He made many acquisitions such as Shopping.com and StubHub, and the classifieds sites Gumtree and LoQUo, and most recently, Shutl. At present, Mr. Donahoe is concentrating more on eBay Marketplaces and PayPal.

John is known as a natural born leader and did not foreseen the success he was about to make when he started Ebay. He always knew he wanted to be a leader and felt comfortable in leadership positions. He was also the captain of his college basketball team, and this was from where he had started nurturing his leadership qualities.

For John, his life is his job and his job is his life. Before joining eBay, he rendered his services for Bain & Company for 20 years, starting as an associate consultant and then became the firm's President and CEO in 1999.

Mr. Donahoe also is known to be supporting various political candidates in whom he believes in. He was helping the Republican Candidates earlier and is now being helpful towards the Democratic movement and hence has been actively contributing to the democratic candidates.

Mr. Donahoe was born on the 30th April, 1960 and is 54 years old now. He received a Bachelor of Arts in Economics from Dartmouth, and is an MBA Graduate from the Stanford School of Business.

He had special interest in basketball is he still plays and game with his kids whenever he finds time. He also enjoys watching basket ball, and also loves to play golf. To relax himself, he would love reading a good book and some of his favourites are Narcissus and Goldmund, by Hermann Hesse and The Mission. He also likes to go on vacations in the side of Cayman Islands too.

He is also known to be following a very strict daily routine. He gets up by 5 every day and is seen in his office by 6am. He does a quick work out before heading to his office. He then keeps himself busy the whole day in office with meetings before heading back in the night to his family.

Mr. Donahoe worked for more than 20 years at Bain & Co., a worldwide consulting firm in Boston. Starting his career there as an associate consultant, Mr. Donahoe became the firm's CEO, after which he developed Bain & Co., emerge as a vast organisation with 30 branches and 3000 employees. He is also one of the Trustees in the Board of Trustees of Dartmouth College, from which he did his graduation.

He has been a Member of Operating and Nominating Committees and was recognised as the Worldwide Managing Director from 1999 to March 1, 2006 for his amazing works. At Bain& Co., John served clients in the telecommunications, airlines, and financial services industries. Before even he joined Bain, he worked with the Rolm Corporation and Salomon Brothers. He has been MD at eBay since January 3, 2012, for Skype Global since November 2009 and Intel Corporation since March 2009. He also serves as the Member of the Advisory Board and a Director at eVolution Global Partners. He is the Vice Chairman of the Advisory Council at Stanford Graduate School of Business. He is in the Board of Trustees of Dartmouth College and Sacred Heart Schools. He was a Trustee of The Bridgespan Group and other charitable trusts.

His Journey with Ebay

John Donahoe became the President and CEO of eBay on March 31, 2008 and counts a major part for the company’s development as a leading trading unit online, worldwide.

He joined eBay in February 2005 as the President of eBay Marketplaces, forming a part for all elements of eBay's worldwide online businesses. He always concentrated on the expansion of eBay's core business, which forms the major part for the company’s profits. Within very short span of his service as the President of eBay Marketplaces, he improved the performance this unit tremendously that the revenues and profits for the unit became twice that of the previous statistics.

One night, when he was 23 and already a consultant at the Bain in Boston, he wrote this message to his wife over dinner: "I will not live the life of a management consultant." After that, he joined eBay as an Interim President and rose to the level of the CEO and the President of the company being one among the top 10 CEOs in the world.

In his journey of being a dynamic CEO, at 54, is doing a good job and bringing out great management techniques in managing such a vast and worldwide company like eBay with many acquaintances to it. John Donahoe is also being successful at developing the women executives in his company providing them a better life and a ray of hope to lead their lives happily and independently.

After 5 years of his graduation, he was married and blessed with four kids -three sons and a daughter. While the oldest kid was reaching high school, John decided to spend time with them before they were grown up more. He, then stated, “I was burned out." The Donahoes are very happy with their 28 years of married life and their kids grown up of which the eldest one has turned 26 years. While John is in an evaluation processes to help women advance at eBay, Eileen Donahoe has advanced quite far too. She is the U.S. ambassador to the UN Human Rights Council.

Mrs. Donahoe lives at Geneva, Switzerland while her husband strives at eBay to develop the company as the only leading online-trading company in the world. "We're making it work," he told his women managers, which sounded like the crazy-busy moms in his ranks. "We're constantly asking ourselves, 'Are we doing a good job?'", stated John while in a meeting with his directors relating his personal life with his professional ones.