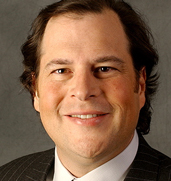 Cloud Computing is a better way to run your business ...

Marc Benioff is also the author of three famous books which also includes the National best Seller – Behind the Cloud. Salesforce.com has reached the milestone of $1 billion in the quarter and revenues are expected to see the growth of 30 percent in the near future.

Marc Benioff has also pioneered the so called 1/1/1 which is the Integrated Philanthropic model. By this model the companies would contribute 1% of the profits, 1% of the equity and 1% of the employee hours back to the community. Many of the companies have also adopted this model, including the giants like Google.

Benioff is also a vocal proponent for a number of companies of all sizes and also includes start-ups. This helps him to add a charitable mission to their business. He believes that making the dough is good but giving back some of the money earned through the same is much better.

Marc Benioff was born in the year 1954 on 25th of September in Binghamton, New York in the United States of America. He was raised in a Jewish family in the metropolitan area of San Francisco. Mr. Benioff completed his graduation from the Burlingame High School in the year 1982. He also received Bachelor’s in Science in Business Administration from the Southern California University. He received this degree in the year 1986 at the time when he was a member of the TKE social fraternity.

Mr. Benioff started his career with the Oracle Corporation and served with them for 13 years in various positions like sales and marketing and product development. He was promoted as the vice president at the age of 23 and was the youngest to receive the Oracle’s Rookies of the year award. Before Oracle, he also worked with Macintosh Division of Apple computers as an assembly language programmer.

Marc Benioff started Slaesforce.com in the year 1999 in the month of February. He has also served as the Chief Executive Officer of Salesforce.com from November 2001 and as the Chairman of the board from February 1999. He also serves as an Advisor at Keas.Inc and served there from 1986 till 1999. He later took up employment with Oracle Corporation where he held various positions from sales to product development and also served as its senior vice president. He worked with various companies for 13 years before starting Salesforce.com. He was also employed at Nextera Enterprises and was a member of Executive council at TechNet. Marc Benioff was the director of Cisco Systems Inc from August 1st of 2012 and was the director of sales force from 1999. He also serves as a director at Notifi.com which is a committee which encourages Corporate Philanthropy and Yield Dynamics. He also serves as director at CloudWords.Inc and as a member of the advisory board at Loyalty Lab Inc. Mr. Benioff is also a member of the advisory board at GrandCentral Communications, Inc. He is also the co-chairman of the President of the United States' Information Technology Advisory Committee along with being the Chairman of Salesforce.com foundation.

His Journey with SalesForce.Com

Salesforce.com was co-founded by Marc Benioff in March of 1999. The company was first started in a small rented apartment in San Francisco and the mission of the same as defined as The End of Software. His main aim was to revamp the way the software programs were designed by firms and the way they were distributed. Marc Benioff can be named as the creator of the term “platform as a service”. He has also extended the business of Salesforce.com by allowing their customers to create and build their own applications with the help of the company’s architecture. These could also be created on the cloud system of Salesforce.com.

Mr. Benioff later realised that Sales force needs not just be an application but it can be a platform which includes a marketplace which are public. He later went on to register appstore.com and rolled out the same with the name called App Exchange.

Salesforce.com is also known to run a charitable organisation which had Benioff himself donate large amounts of funds towards various noble causes.