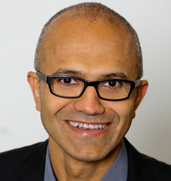 Everything is going to be connected to cloud and data ...

‘Satya Nadella’ is an Indian origin is appointed as the CEO of Microsoft on 4th February 2014. He is from Hyderabad, Andhra Pradesh. Earlier, he was the Executive Vice President of Cloud and Enterprise Group of Microsoft; build the company’s computing platform and running of developer tools and cloud service.

Satya Nadella was always a proven leader who also has hard core skills in engineering. He also has the business vision as also the ability to bring the employees together. He has a vision for the how technology and this is expected to be used and also expereiced by the World. This was what the Microsoft was a company would need in this next chapter of the company’s expanded growth as well as innovation.

He stated in an interview that some of these leadership lessons were learned when he played in his school cricket team. He also says that, a lesson about when to intervene and when to build the confidence of the team was learned then.

After becoming CEO, he said in a conference of computing giants that, it is just beyond his wild dreams. Admittedly, he said while in his grown up days in India, he was more interested in cricket than technology. Today India has advanced a lot with technologies over the past few years and there are more opportunities for the developers.

Nadella is appointed as the CEO of a 78billion company. The analysts of industries consider Nadella as the safe pair of hands and a person who is likely to change the direction of Microsoft too much. Nadella has shown the right attitude in his career for adapting new environments from his past, changing roles every year.

“During this time of transformation, there is no better person to lead Microsoft than Satya Nadella,” - Bill Gates, Microsoft’s Founder and Member of the Board of Directors

Nadella’s full name is Satya Nadella Chowdary born in Hyderabad and belongs to a Brahmin community of Bukkapuram village, Anantapur District of Andhra Pradesh to a Telugu Family. His father B.N Yugandhar is an IAS officer and was the member of 2004-2009 Planning Commission under the Prime Minister Manmohan Singh. Nadella did his schooling from Hyderabad Public School Begumpet and Electronic and Communication Engineering from Manipal Institute of Technology in the year 1987.

Afterwards he moved to U.S, there from University of Wisconsin-Milwaukee and earned MS in Computer Science in 1990 and then MBA from University of Chicago Booth School of Business. Nadella always wanted to build things and computer science is the right area for him, he knew that. But computer science course was not offered by Manipal University that time so he went with electronic engineering and it drive him to his passion, he said. According to his father’s reaction to his son becoming a CEO, he said, Nadella was very studious and hardworking and that has achieved his goals.

Nadella love to read American as well as Indian Poetry and a big fan of cricket. His passion for cricket has led him to play in the school cricket team. He said, he has learned leadership and teamwork from his ideal sport Cricket.

Nadella started his career as a technology executive at Sun Microsystems and later on joined in Microsoft in the year 1992. Microsoft has recently set its first development center in Hyderabad, outside it’s headquarter in Redmond Hills, in Satya’s home town. Satya said the laid-back culture of Hyderabad influenced him a lot of thinking over the things and to achieve this place in his career.

Nadella, 42 year old man is earning an annual salary of $1.2 million as the CEO of Microsoft and his overall package including bonus and stock awards it is $18 million or Rs 112 crore a year besides other various perks.

His Journey with Microsoft

Microsoft is one of the rare companies that have truly revolutionized the whole world with technologies and he feels more honored now to be chosen as the lead of the company, Nadella said. He is having a 22 years long time relation with this company. “During this transformation time, no other better person can lead Microsoft than Satya Nadella’, Bill gates the founder of Microsoft and the member of the Board of Directors said when Nadella was announced as the new CEO.

“Microsoft is one of those rare companies to have truly revolutionized the world through technology, and I couldn’t be more honored to have been chosen to lead the company,” Nadella said.

Nadella’s works had led him to the executive vice president of Cloud and enterprise group. In this position he is credited for shaping the Microsoft’s Cloud OS strategy, online service backing system. This Cloud OS helps running Microsoft services like, SkyDrive, Bing, Windows Server, Xbox Live and Visual Studio.

Satya Nadella believes that the longitivity in business happens only when one is able to reinvent himself or reinvent the future. In the 39 successful years of Microsoft, it was all about reinvention for the company. Though there were great success stories, Satya Nadella believed that the future is not about the successes of the past. It is important to invent things which really drive success in the future. He also believes that everything has a rise and fall, be it a company or a family or even a civilization and there are very few companies which are 100 year old and he does want Microsoft to be a part of a 100 year old company list.

Satya Nadella married Anupama, the daughter of his father’s friend who was his IAS batchmate, K.R. Venugopal. The couple has three children, a son and two daughters. The family presently lives in Bellevue, Washington.

Satya Nadella is also known to be an avid reader and he loves reading American and Indian Poetry. He is fond of Cricket which was his passion in his growing days. He has also played cricket in his school team. He states that he has learnt leadership as well as teamwork by playing cricket.