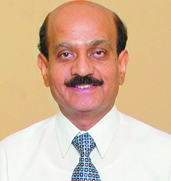 We are very consistent with our policies; InfoTech is not a short-term player...

B.V.R. Mohan Reddy, often addressed by his family and friends as Mohan, is the Founder and CEO of InfoTech Enterprises Limited. He is also the Chairman and the MD of InfoTech. Mr. Reddy is also known to be a true entrepreneur as well as a technologist; Mohan is also known to be a pioneer of the CAD/CAM in India. He can proudly boost of more than 30 years of experience in both engineering and management. The success behind InfoTech can be termed as a testament to the vision of Mr. Reddy to build an organisation which is customer focused and also delivers high quality standards. Mohan Reddy is indeed a founder who can enhance of having the global aerospace giant, Pratt & Whitney as one of their clients.

Mohan Reddy can be termed as an entrepreneur for almost two decades, finds some time now to learn music along with nurturing his $261 company. He dreams to turn his company now into a billion dollar company.

Being acknowledged as an innovative and results-driven leader, Mr. Reddy has always focused on achieving exceptional results in highly competitive environments that demand continuous improvements. He is blessed with a pleasing personality and additional skills in utilizing keen analysis, valuable insights and team approach to drive directorial enhancements and functioning of best practice.

Mohan Reddy was born on the 12th of October 1950 and hails from a town in Andhra Pradesh. He has completed his graduation in Mechanical Engineering in the year 1971 from the college of Engineering Kakinada, Andhra University. He also has two Master degrees. One of the Masters was from University of Michigan, USA in Management Engineering and the other one in Industrial Engineering from the prestigious Indian Institute of Technology Kanpur.

Mohan as he is fondly called by the people who love him is known to be a visionary person even from his childhood. A person also known for his social responsibility has given shape to his dream by starting the InfoTech Enterprises Charitable Trust. The trust gets its funds from the 1% pre-tax profit of InfoTech and is purely used for social initiatives. ICET as it is shortly called as so far adopted 14 government schools and also provides the basic amenities to more than 10,000 children who are under privileged.

Mohan Reddy started his career with the DCM group and then moved on to MICO BOSCH. After spending tenure with BOSCH, he served with HCL.

Dr. BVR Mohan Reddy, the founder and the Managing director of InfoTech Enterprises and has been serving as its Managing Director since July 27, 2004. Dr. Reddy also pioneered the CAD/CAM culture within India, and he has more than three decades of engineering experience majorly in IT sector. He presently serves as the Chairman of InfoTech Enterprises limited. He has also worked as the Additional director of Coromandel International from January 22nd of 2008. He also serves as the Independent director of Ocimum Biosolutions Limited. He is also on the board of directors of Godavari Fertilizers and Chemicals limited. Mr. Reddy is also a member of the Executive council of NASSCOM as well as the advisory councils of various institutions. He has led and suggested various initiatives with his thoughts and his vision. Most of his initiatives were for the benefit of the IT sector.

His Journey with InfoTech Enterprises

InfoTech Enterprises is now a global technology services and a solution company in the year 1991. Founded by BVR Mohan Reddy, the firm specializes in geospatial, engineering design along with IT solutions. Some of its clients include well recognised names from the aerospace, telecommunications, railways, mapping industry as well as the government. The offices of InfoTech are located in United States, UK, Australia, Singapore and Netherlands.

When Mohan Reddy started his engineering services firm, he knew he was ahead of time as not many western companies were comfortable with the idea of outsourcing engineering. He then found a nice with the GIS (Geospatial Information systems). The work included to convert paper based maps to digital format which later became the DNA of the company.

When Mohan Reddy started his engineering services firm, he knew he was ahead of time as not many western companies were comfortable with the idea of outsourcing engineering. He then found a nice with the GIS (Geospatial Information systems). The work included to convert paper based maps to digital format which later became the DNA of the company.

BVR Mohan Reddy is married to B. Sucharitha who is the whole-time Director on the board of Infotech IT since 1992.