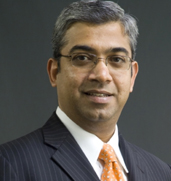 IGate has great market opportunity right now because of the Company’s ability to deliver excellent solutions across numerous vertical markets....

Ashok Vemuri, a person very simple to look at is the new CEO of IGate from September 2013. A person who is a diehard fan of Jamie Dimon, the CEO of JP Morgan Chase and Nandan Nilekani, calls them as the true icons and tries to act as they do. Known to be an excellent communicator, Mr. Vermuri possesses skills in interfacing with clients, cultivating relations with them for securing repeat business and ensuring quality delivery of services to clients.

Mr. Vemuri believes that a manager plays a very important role to groom the juniors and in becoming redundant and believes that this is how the competent amongst them can be taken over. Ask him about Infosys, he is all praises for the Senior Management for the promotion of meritocracy and for encouraging new ideas and innovation. He is a keen analyst with admirable skills in market forecasting and formulating strategies to make use of business opportunities.

Ashok Vemuri mentioned that he gets immense satisfaction to head the team which managed turbulence in the banking sector the previous year. A person, who is an ardent fan of Carnatic Classical Music, says he gets completely immersed while listening to M.S. Subbalakshmi on his IPod.

He is blessed with a consistently upbeat and enthusiastic attitude, he is recognized to be an enterprising leader who has mentored people with an equal desire to perform and win.

Ashok Vemuri is known to be a very hard working person from his childhood. He has born in the year 1969. He has completed his Graduation with Honours with Physics from the St. Stephens College from Delhi. Mr. Vemuri has later completed his Post Graduate Diploma in Marketing Management from the Indian Institute of Management, Ahmadabad.

Prior to joining the prestigious Infosys, he had established Financial and Insurances business for close to nine years and later made it one of the largest business units within Infosys. Later when he joined Infosys in the year 1999, he was responsible for the company’s largest region which had $4.7 billion as revenues and he was responsible to supervise all facets of the business, which ranged from Strategic direction to maintenance and improvement of the operational efficiency.

Mr.Vemuri joined Infosys in the year 1999, and he headed its operations across Canada along with Eastern North American Region. He was also associated with the Investment Banking sector and has worked with Bank of America and Deutsche Bank. He has also served on the Board of Infosys Consulting as well as Infosys Technologies from June 11 of 2011 till September 12th of 2013. Ashok Vemuri also serves on the Board of Visitors of the Fuqua School of Management at the University of Duke.

His Journey with IGate

The world’s leading outsourcing firm, IGate, has appointed Ashok Vemuri as its new CEO effective from 16th of September 2013. He has taken the place of the earlier CEO Phaneesh Murthyin, who left IGate in the month of May, 2013. As listed by Times of India, Mr. Vemuri is said to receive a compensation of about $3 million along with the Stock Options as well as the performance linked bonuses. Vemuri who is known to be much disciplined and extremely good at managing complex political environment is known to have moved up to the position of CEO with Infosys in just 12 years.

It was stated by Ashok Vemuri that IGate which has over $700 million in debts has entered into a credit agreement for a loan facility of about $360 million with the DBS Bank and the ING Bank and this move will certainly help the US based IGate save $105 million worth of interest for about five years. The firm is also spending time over finding and also grooming the right leaders under the supervision of their new CEO, Ashok Vemuri.

Ashok Vemuri was born in the year 1968. He is presently known to be living in Bridgewater, New Jersey. He also stayed at Bridgewater earlier from the year 2001 to 2005. He shows up in Bangalore during the time of quarterly results of the firm.