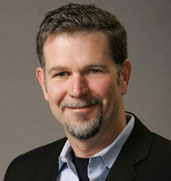 Most entrepreneurial ideas will sound crazy, stupid & uneconomic, and then they'll turn out to be right...

Known to be a visionary, Reed Hastings is known for his habit of taking big risks which have paid him very well time and again. Reed Hastings is known to the world as an entrepreneur and also as a philanthropist. He is the co-founder and also the chief executive officer of Netflix, which is a rental by mail DVD Company. He is also on board of the World famous social networking site, Facebook along with few other non-profit organisations.

A believer in Internet television, the streaming of movies and TV shows on to the laptops of the users was started by him in the year 2007. Reed Hastings is also a member of a network of Businessmen and Executives called the Technology network.

Reed Hastings was born on 8th of October in the year 1960. He was born in Boston, Massachusetts. Hastings father was a lawyer who once served in Nixon administration and served as the general council in the United States Department of Health, Education and Welfare. He completed his graduation in the year 1978 from the Buckingham Browne & Nichols School which is located in Cambridge. It was after his high school that he sold vacuum cleaners from door to door for almost a year. He later attended Bowden College and mastered in Mathematics and also gained the Smyth Prize as well the Hammond prize in the year 1983.

Reed later joined the Peace Corps, and this was here that he built his risk taking spirit. After he returned from the Peace Corps he graduated with a Masters degree from Stanford University in the year 1988.

Reed Hastings received his first job in the year 1991 at Adaptive Technology. He later quit the job to start his own company, by the name Pure Software. This firm started seeing rapid growth, but Reed had to face few challenges due to the lack of proper management. It was in the year 1996 that his company merged with Atria Software and the very next year this firm was acquired by Rational software. Hastings was appointed as the CEO of this firm. Due to the much increasing bureaucracy, Hastings decided to quit the company.

Reed Hastings is the founder of Netflix in the year 1997 and served as its Chairman, it’s CEO as well as its President in the years 1997, September of 1998 and July 1999. He is also serving as an Advisor at the Foundation capital as well the thredUP Inc. He also served as the Chief executive officer at the Technology Network. Hastings also served as the President of Pure Atria software from October 1991 till August 1997. He was the Chief executive officer of Pure Atria when he decided to leave the company. Hastings is also director of Facebook from June 2011. He also served as the Director of Microsoft Corporation from March of 2007 till November of 2012. He also served as their Lead Director till November 2012. It was in the year 2000 that he joined the California Teachers Association and others in order to win the battle for an easier process of school construction bonds.

His Journey with Netflix

Reed Hastings has co-founded Netflix along with Marc Randolph in the year 1998. Netflix is one of the World’s leading Internet television network which members from more than 40 countries who enjoy about 1 billion hours of TV shows and movies every month. Netflix offers it members a very low monthly price for which they can watch unlimited hours from anywhere and anytime. All the members would require is an internet connected screen. Hastings was not sure if his firm could attract any customers along with his concern about the growth issues. He always wanted to create an entertainment company which would never lose its entrepreneurial spirit in the way.

To his surprise Netflix saw a rapid growth and some of his new techniques in management gained a lot of attention. The employees of Netflix were also paid higher salaries when compared to others. He also was responsible in introducing many policies which were not implemented anywhere else. One such example was the huge severance package which was given to employees who were let to go and were sick.

Netflix gained more than 33 million members in the United States, Canada and United Kingdom. Netflix, under the supervision of Reed Hastings has changed the way people enjoy entertainment.

A person who believed in internet television, he began streaming videos in the year 2007 and in year 2011 , he announced the spinning of the Netflix’s famous DVD business with a new name which confused most of its customers. It was then that he was asked to resign but Hastings refused the same on the grounds that he founded the company and the company was facing such trouble for the first time in 12 years.

Reed Hastings presently stays in San Francisco Bay Area and is married. Hastings has two children from his marriage.