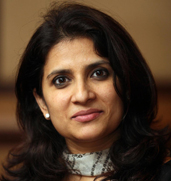 Sulajja Firodia Motwani is a name of success and also is a name one can reckon among all the women achievers, as she has made the country proud once and again with her hard work and achievements.

Sulajja Firodia Motwani is known to everyone as the Joint Managing Director of Kinetic Engineering Ltd and also the Director of Kinetic Motors. She hails from a business family and she is the grand-daughter of H.K. Firodia, who is the founder of the Kinetic Engineering and also the daughter of Arun Firodia who is the founder of Kinetic Group. Sulajja Firodia Motwani is known to be a multi-lingual who is known to have a great fluency in languages like Marathi, Hindi, Rajasthani, French and English. A fitness person as she is known to her family and friends is known to be carrying one or the other activity to keep her fit and active. Enthusiastic about sports, she is known to play badminton frequently and has also represented in the National level.

Sulajja Firodia Motwani is also known to be a person of courage and boldness. With the same determination, she has been successful in establishing a nice firm in the competitive world of business. The company, Kinetic Motors has seen a rapid growth and expansion during her tenure and she is the person behind Kinetic setting its foothold in the industry as one of those manufacturers who offers a complete range of the two wheelers like mopeds, scooters to motorcycles.

Sulajja Firodia Motwani was born in the year 1970, and was a meritorious student from the very beginning. She completed her graduation from the University of Pune in the year 1998 from the commerce stream. After the completion of graduation, she went to US for further studies and joined the Carnegie Mellon University to complete her Masters in Business Management. She was always known to top in her school and college days.

After the completion of her Masters from Carnegie Mellon University in the year 1992, she joined an investment company known as BARRA International and worked from its San Francisco office, which was also a part of the MSCI, which is a multinational and also an indices company.

His Journey with the Kinetic Group

Sulajja Firodia Motwani joined the Kinetic group in the year 1997. Her initial designation within the company was as a General Manager, corporate affairs. She also played an active role in the strategy formation within the company and she presently serves as the director of the Kinetic Motor Company Private Ltd. Sulajja Firodia Motwani also supervises the business development operations if the Kinetic Marketing services limited. It was under supervision that Kinetic Motors has recently had a tie up with an Italian Motor company, Italijet Moto and the group is all set of launch its new and the latest models in India.

It was also said that when the Kinetic Group’s tie up with the Honda Motor company of Japan came to an end in the year 1998, Sulajja Firodia Motwani approached a Taiwanese company, UEN and South Korean motor company, Hyosung Motors in order to launch a new variety of two wheelers. It was due to her strategic and timely intelligent decisions; the Kinetic Group was able to achieve the sale of about 20,000 vehicles in the year 2002. This can be termed as a quantum jump in the sales figures as it was the time when the company was struggling for its survival. It can hence be said that she always played a very instrumental role in the success of Kinetic Motors.

She tied the knot with a businessman and who is the present Managing Director of Kinetic Hyundai. The couple have a son who is a teenager by the name Siddhant. Daughter of the founder of Kinetic Group, managing the family owned business has come quite easy for her, who is very passionate about badminton. If not a part of the Kinetic group, she would for sure have been a badminton prodigy.

Sulajja Firodia Motwani has two sisters and one brother. The younger of them, Vismaya who is an engineering graduate handles the export and the PR operations of the Kinetic Group.