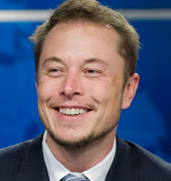 Elon Musk, who describes himself as a workaholic, is known to invest 100 hours a week for proper functioning of SpaceX and Tesla Motors. Elon Husk is a South African born Canadian American engineer and an inventor and the CEO of SpaceX and also the Chief Product Architect of Tesla Motors. He is the founder of SpaceX, Tesla Motors and PayPal. A multimillionaire in his early twenties, he happened to sell is first start up Zip2 but later went on to launch PayPal, SpaceX and later Tesla Motors.

Elon Musk had hit the headlines in May 2012, when a rocket was launched by SpaceX which would send the 1st commercial vehicle to the International Space Station.

Born on June 28th 1971, Elon Musk resides in the neighbourhood of Los Angeles, California. He was born to a Canadian Mother and a South African Father. Elon Musk’s sister Tosca Musk is the founder of Musk Entertainment, and she has produced many movies. His cousin, Lyndon Rive is the Co-founder and CEO of SolarCity. Elon Musk started to teach himself computer programming in the early age of 12 and happened to sell the computer code for a video game called Blastar for $500.

Musk completed his graduated from the Pretoria Boys High School and later moved to Canada in the year 1988 in the age of 17. This was after he obtained the Canadian Citizenship from his mother. Musk received a Bachelor of Arts degree in business from the University of Pennsylvania and also a second Bachelor of Science degree in Physics from the same university.

He later moved to California to study Ph.D in applied physics at the Stanford University but later left to continue with his entrepreneurial aspirations in the field of renewable energy and outer space. It was in the year 2002 that he was naturalized as an American citizen. Musk started his career with Zip2, his own web software company along with his brother Kimbal Musk. He later had to sell the firm in year 1999 to Compaq which acquired the same for US $307 million in cash and also US $34 million in stock options. Elon Musk received a 7% share from this sale.

Elon Musk founded the Space Exploration Technologies Corporation in the month of June 2002 and also serves as its CEO, Chief Rocket Designer as well as the Chief Technology Officer. He is also the co-founder of Tesla Motors Inc and served as its CEO and the Chairman from January 2004 till October 2008. Musk also serves as its Product Architect. He also co-founded PayPal in the year 1995 and also Zip2 with the help of investments from the New York Times, the SoftBank as well as from Hearst Corp. He served as the CEO and CTO of the same from March 1999 and later sold Zip2 for a cash deal which is known to be the highest in the Internet history. He also co-founded X.com in March 1999 which later merged with Confinity in the year 2000. He also served as the CEO of X.com from March 1999 till December 1999.

His Journey with SpaceX

SpaceX was the third company which was founded by Elon Musk. SpaceX or otherwise known as Space Exploration Technologies was founded in June 2002. This is a Hawthorne based company which had Musk serve as its Chief Executive Officer as well as Chief Technical Officer. SpaceX develops space launch vehicles and has its focus on the advancement of space and rocket technology. The first two vehicles which were launched by them were Falcon 1 and Falcon 9 rockets and its first spacecraft was named Dragon.

SpaceX was given a $1.6 billion contract by NASA on the 23rd December 2008 which was for 12 of their Falcon 9 rockets and a Dragon spacecraft and these replaced the Space Shuttle of NASA in 2011. In about seven years, SpaceX was responsible for the designing of the family of Falcon launch vehicles as well the Dragon spacecrafts. It was in September 2009 that Falcon 1 became the first privately funded liquid fuelled vehicle which has put a satellite into the Earth’s orbit.

Elon Mask in an interview stated that he would like to see humans travel to the Mar’s surface in the coming 10 to 20 years. On the 25th May 2012, the Dragon spacecraft docked with the ISS, made history as the first commercial company to launch as well as harbour a vehicle to the International Space Station.

Elon’s first wife was a Canadian born author, Justine Wilson, whom he met when they were students at Queen’s University. Their wedding took place in the year 2000 and got separated in the year 2008. He later got married again to a British Actress Talulah Railey and ended their relation in January 2012.