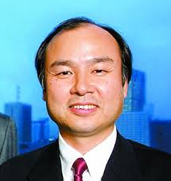 We believe that online investing is going to be one of the highest growth business segments of the next decade...

Masayoshi Son is a well known Japanese Businessman and also the current CEO of Soft Bank and is also the chief executive officer of the Soft Bank mobile. He also serves as the current Chairman of Sprint Corporation. As per the Forbes Magazine, the net worth of Masayoshi Son is $9.1 billion as per in the year 2013, and he is also known to be the second richest person in Japan. He is also one of those few businessmen who have lost a major sum of money in business which was estimated to be $70 billion. The Forbes also named him as a philanthropist.

Masayoshi Son founded the Soft Bank in the year 1981 and he was the first man behind the supply of Internet in Japan in the year 2011. He now runs a company which has close to 19500 employees and the company is known to be the third largest operator in Japan.

Masayoshi is the grandson of the Korean immigrants who settled in Japan. He spent his early days in Tosu, which is a remote area located outside Tokyo. It was in the age of 16 that he met the founder of McDonald in Japan. Den Fujita was the person who advised him to study English and also asked him to concentrate on the informatics industry. He later moved to the United States and completed his graduation from Berkeley University with a BA in Economics. During his stay in US, he also invented an automobile translator which at that time was sold for $1 million. It was in the year 1981, he came back to Japan and then founded Nihon Softbank and this was the company which later went on to become the Softbank which has Masayoshi as the CEO and the founder. It was in the year 1990, that Masayoshi Son has adopted the Japanese Citizenship.

Masayoshi Son also believes that a person needs to fight for success to be successful in life. To hear it in his own words, he states that losers always give excuses, but winners always fight. He is also a person who believes in taking risks. He also states that he likes to take bold moves, and he is more aggressive to acquire new companies or to start a new business.

Masayoshi Son presently serves as the Chairman and the chief executive officer of the SoftBank mobile corp. This was since the month of April 2006. He founded Soft Bank in the year 1981, and he is its President from the year September 1981. He also serves as an Executive of ZDNet Inc. He also served as the President and the CEO of Mediabank Corporation from 1994. He is also the CEO and the chairman of Softbank BB Corp. He was with Japan Sky Broadcasting Co. Ltd. from 1996 to 1998 from 1997 to 1998. He is also known to have served as the chairperson of UTStarcom Inc from 1995 October to March 2003. He also serves as a Director of Pasonabank Inc., Yahoo! Japan Corporation as well as for E-Trade Group, Inc and also as a representative Director of Cisco Systems. He is also associated with Alibaba.com Japan as its Director as well as the Director of Xiaonei.com and Renren.com.

He has served as the Directors of Ariba Inc as well as Aozora Bank Ltd from the months of April 1998 till October 1999. He is also one of the members of the Member of Advisory committee with the Business Breakthrough.

His Journey with Soft Bank

Masayoshi Son has founded the Softbank in the year 1981 after he returned back from the US. It was after two years that he had a hepatitis attack and he had to spend several years during that illness. It was during this time that he created a partnership with the Microsoft corp. In Japan and he also received a 25% stake in the Novell Japan which is a software company. It was in the year 1994 that he became the president of the Mediabank Corporation and a year after he also acquired Ziff Davis and he also acquired a stake in Yahoo Japan.

It was in the year 2013 that his company made a statement which states the company’s vision and also about the latest communication services which were developed. He also stated that after the result of the same, the customers can always connect easily and also enjoy a fast and smooth communication. He also stated that after 2013, the company will further see developments with respect to the global vision and will also take a step into the US market.

Masayoshi Son is married and has two children. It was in the year 1990 that he obtained the Japanese Citizenship. It was during the time of Tsunami that he collected close to $119 million for its victims and also donated $130 million of his money to provide extra support to the relief efforts.