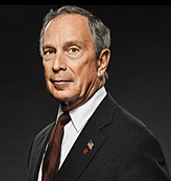 I know how to make decisions and stand up to the criticism every day...

He is the man who served as the 108th Mayor of the New York City for three consecutive terms from the time he was first elected in 2001 and he is none other than Michael Rubens Bloomberg who was born in the year 1942, is a very well known American Business man, a politician as well as a philanthropist. He is known to have assets worth $31 billion and is the 7th richest person in The United States of America. He stands in thirteenth position of the wealthiest in the World.

The life of Michael Bloomberg can be termed as an inspiring journey with ups and downs, but he is a man who enjoys both success as well as philanthropy.

A Masters Degree holder in Business Administration, he joined and became a partner with Salomon Brothers after his education and later went ahead to start his own company – a firm which made a revolutionary change in the distribution of financial information. This made him a millionaire.

Bloomberg was always mentioned to be an ideal and a possible candidate for the United States presidential elections of 2008 and 2012, but he declined to seek either of them and continued to serve as the Mayor of the New York City.

He was the son of the book-keeper; he completed his education from Johns Hopkins University and the Harvard University. He earned a degree in Master of Business Administration in year 1966.

The family used to live in Allston till Bloomberg was two years old. They later moved to Brookline and finally settled in Medford. Bloomberg is also known to be an Eagle Scout. He also completed is graduation in the year 1964 in Electrical Engineering and he also attained a degree in Business Administration from the Harvard School of Business. Michael Bloomberg was known to be an excellent student and a very avid reader. Some of the books which he enjoys to read in his early days were about revolutionary war heroes which were both real and fictional.

It was in the year 1973 that Bloomberg became as the general partner at the Salomon Brothers, which is a bulge-bracket Wall Street investment bank. Bloomberg headed the equity trading initially and later headed the systems development. After Salomon Brothers was bought in 1981, Bloomberg was laid off from the job and was given a severance package of $10 million. These funds were used by him to start up his own firm by the name Innovative Market Systems. He also co-founded Bloomberg LP in the year 1981 and also served as its Chief Executive officer as well as its President. He also serves as the Ex Officio Member of the Board of Directors of the Lincoln Center for Performing Arts along with serving as a Chairman for National September 11 Memorial and Museum which is located at the World Trade Center Foundation. He also served as the Honorary Chairman as well as the Director of the NYC and Company Inc.

Bloomberg also served on various boards of 20 different cultural, civic, educational as well as medical institutions which also includes the High School for Economics and Finance.

His Journey with Bloomberg Philanthropies

Michael Bloomberg married Susan Brown, a Yorkshire born girl in the year 1975. They had two daughters by the names Emma, who was born in the year 1979 and Georgina, born in the year 1983. Both his daughters were also featured in a documentary named Born Rich which was about the kids who are born wealthy. Bloomberg separated with his wife, Brown in the year 1993 but still stated that she would remain his best friend. From the year 2010, Bloomberg was reported to be staying with Diana Taylor, who was a former New York State Banking Superintendent.