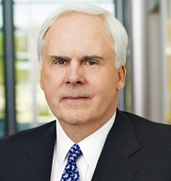 My innovation involved taking an idea from the telecommunications & banking industries, and applying that idea to transportation business....

Fredrick W Smith is the entrepreneur who wrote a school papers and received a grade C for the same. The paper which was then not liked by his professor as the idea was not feasible turned around towards creating a global sensation and has made Fredrick W Smith a billionaire. The company which was made the Federal Express. Fredrick Smith is the chairman and CEO of FedEx which is a $45 billion logistics and global transportation company. To everyone’s surprise, this company also found its place as one of the World’s Most Admired companies consecutively for years. FedEx is also the first overnight express delivery company in the World and is also the largest. It has its headquarters in Memphis.

Smith is always known to be an extraordinary businessman and is active with charitable events, which are the benefits from the resources of FedEx. He is known to quickly understand and act to the needs to the people and offers planes and desperately needed resources to the countries which are hit by any natural calamities. Such social and charitable activities got him various honours from different organisations.

Fredrick W Smith was born in the year 1944 in Marks, Mississippi. He was the son of James Fredrick Smith who was the founder of Toddle House and the Smith Motor Coach Company. From early childhood, Smith was troubled by a birth defect known as Calve Perthes disease, a peculiar form of childhood arthritis of the hips caused by a temporary loss of blood supply to the hip. The ailment was such that Smith spent much of his early years on crutches and in braces to stabilize his hip joint sockets.

Smith attended his elementary school at Presbyterian day School and completed his high school from Memphis University. Fredrick Wallace Smith, as a teenager had a special interest in planes and flying and hence he set out to obtain his pilot’s licence. In the year 1966, he graduated from the University of Yale with a degree in Economics. He joined Marine Corps soon after his graduation. The four year term with Marine Corps was well spent as it gave him the opportunity to examine the working logistics system and the procedures which are involved in the delivery and procurement. This helped him in fine tune his business plan which he has written during his school days, which was then described by him as a global overnight delivery service.

He was discharged from the Marine Corps in the year 1969 with the honour and the rank of the Captain and also received a Silver Star, the Bronze star and two Purple Hearts.

It was in the year 1971 that Smith took the money left over by his late Father and started his own company, Federal Express. He recognised the need of the customers who wanted the superior service than the government postal department. The company was started upon one premise that was to deliver the package to the destination overnight. The company slogans and advertising clearly states what they did and represented. Above all, this service was also provided to the customers at a very reasonable cost which made Federal Express an instant competition for the postal department.

Fredrick W Smith has also worked as the CEO and President of FedEx Corporation at FedEx Ground Package System as well as FedEx Freight Corporation since January 1998. He was also the founder of Memphis Angels. He founded Federal Express in the year 1971 and served as its president from 1971 to 1975. Mr Smith was also an officer in the Marine Corps from 1966 till 1970 where he worked in Vietnam. He was also the Director of Start-up America Partnership from the year August 2011. He serves as one of the members of the Advisory Board of Forstmann Little and also as the Emeritus Public Trustee of Mayo Clinic Health Systems. Smith is known to have worked on several boards of many large scale public companies. He serves as the Co-chairman of United Nations World War II Memorial Project. He also worked as the Director of Value America from year 1999.

His Journey with FedEx

Fredrick Smith is the founder and CEO of Federal Express which is now a $45 billion company which is into global transportation, logistics as well as business services. Mr. Smith is responsible to provide the strategic direction for all the operations of FedEx like FedEx services, FedEx Express and FedEx Ground. FedEx is known to serve in more than 220 countries as well as territories and its operations include 634 aircraft and more than 90,000 vehicles. A team size of more than 300,000 handles close to 10 million shipments each business day. From its start in the year 1971, Fredrick Smith was responsible for the proponent of the regulatory reform and various Open Skies Agreements which helps for aviation around the World. A very recent step by Smith was that he advocated for the vehicle energy and their efficiency standards as well as a national energy policy.

FedEx under the supervision of Mr. Smith has strengthened its quality standards and emerged as the Industry leader from the past 40 years. The company has received and is receiving several accolades for its commitment for their quality service. Throughout all these years, FedEx also did receive stiff competition from the improved postal service as well as from various other shipment companies. As they had their own fleet of airplanes, FedEx was not affected or faced any problems with commercial carries. It is said that Smith always reacted smoothly to the trends which took place in the market. Smith also had an understanding that most of their customers were price sensitive, and he would lose business if the wrong price was chosen. Hence, he always laid his focus to know the right price for the company’s services.

Fredrick Smith also reacted wisely to the economy when things went rough. He did reduce his own salary as well the pay’s of the top managers. Advertising costs were also reduced to save the business and this willingness of his made him popular among critics as well as analysts.

Fredrick Smith fought hard to back down the negative, and he did not listen when someone told him that his idea would not fly. He stepped ahead and created a company which is now the World’s largest businesses in the World. He managed to attain sustainable growth and one can now see his idea become obsolete.

Fredrick W Smith was married Linda Black Grisham; the couple were divorced in 1977. After that he married Diane smith and they were blessed with five daughters and three sons.