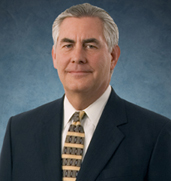 If you want to live by the precautionary principle, then crawl up in a ball and live in a cave...

Here is a man who could be renamed as the walking controversy and emerging victorious. Rex Tillerson, the CEO of Exxon Mobil ,one of the world’s largest oil company has given it all to his organizational alma mater. Starting as a humble engineer with the designation of a production manager, his journey with the company has been that of whirlwind success as well as controversy. Though the successful businessman in him has hit the headlines time and again for the record breaking figures that the company has achieved in his guidance, and the number of honours and accolades that has been accredited to his name by some of the big names in the sector and others worldwide, yet the environmentalist in him has been questioned time and again on his approach of placing business over humanity.

Yet like a true entrepreneur everytime, he has silenced the critics with one of his kind success mantras and quotes which are not only irrefutable but is food for thought as to prioritizing of resources. He is a man who defines dignity and belief in one’s work, who has stood against the test of time and emerged as a true winner in the face of struggle both internal in terms of the company as well as conspiracy theories thrown out of the blue from across the globe.

Born on 23rd March in Wichita Falls, Texas, he spent the majority of his childhood at Oklahoma and Texas, which are incidentally two of the world’s leading producers of Petroleum and Natural Gas- and hence the man today can speak about these resources with such ease and expertise. Hailing originally from Wichita Falls, Texas; Rex has taken the world of oil and petroleum by shudder and shimmer. Based on the records, he is believed to be an American by Nationality and currently residing at Irving, Texas.

From a very tender age, the life of scouts attracted Rex, and thus he successfully earned the rank of an Eagle Scout as early as 1965. Thereafter he went on to graduate from Huntsville High School in Texas in the year 1970 and successfully attained a Bachelor of Science degree in Civil Engineering from the University of Texas at Austin (1975). During his learning at University of Texas, he was majorly involved with the Longhorn Band, Tejas Club and Alpha Pi Omega and in the year 2006 was named as a Distinguished Engineering Graduate. Later in 2011 he was honoured with a doctorate engineering degree from the Worcester Polytechnic Institute. Rex joined Exxon Company, U.S.A as a production engineer immediately on completing his degree in Civil Engineering in 1975.

Tillerson’s career graph though shows the starkest and progressive outlook, yet his professional life has not been a bed of roses to say the least. He has been attacked on multiple occasions for his speeches, thoughts and institutional support in the context of climatic changes, sustainable development, and alternative sources of energy to say the least. Irrespective of his phenomenal achievements in terms of the company’s growth progress which recorded for an estimated 80 percent of the company's $11 billion profit in the year 2002 and the number of accolades which had proved his worth as not only a successful business man but as a responsible citizen, yet the world at large considers him as a risk to national security and unevidenced funding of activities that are believed to cause irreparable climatic catastrophe in the mere future. However as quoted by Cathy Booth Thomas in an article on Time’s Magazine “when he walks into the room, Rex Tillerson radiates competence and stability, Tillerson has a reputation as a good 'hands-on' guy and a solid exploration and production manager. He's a Texas engineer type in a company with a history of being run by engineers.”

His Journey with Exxon Mobil

Tillerson’s journey with Exxon started as early as 1975, as a production designer when he freshly graduated from the University of Texas with a degree in Civil Engineering. There, he was involved in a diversity of role playing ranging from technical, engineering to supervisory assignments. Thereafter from 1987-1989 he was involved as a business development manager in the natural gas department. The big leap in his career came in the year 1995 when he was appointed as the President of Exxon Yemen Inc. The year 1998 saw Rex as its best with a multitude of responsibilities bestowed upon him as the Vice President of CIS and Production Khorat and president of Exxon Neftegas Limited apart from being responsible for Exxon’s holdings in Russia as well as in the Caspian Sea region. In 1999, he was appointed as Executive Vice President of ExxonMobil Development Company, irrespective of being in the controversial struggle between the management body and the shareholders, not to mention gliding with glee over the conspiracy theories. In 2001, Rex became the President of Exxon Mobil Corporation and finally the year 2006 saw him becoming the Chief Executive Officer for ExxonMobil. He is regarded as one of the most efficient employee that Exxon has seen through his managerial, supervisory and executive roles, further his contribution was an approach to the production and technical aspects of the Company is unparalleled. It is under his able guidance that Exxon vied with Apple Inc has progressed to become the one of the world’s largest oil companies as well as the largest public company in the region based on market value.

Rex is married to Renda St. Clair and is blessed as the father of four children.