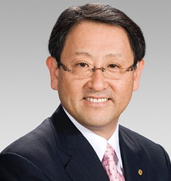 The president and CEO of Toyota is the grandson of Kiichiro Toyota, the founder of the Toyota Motors was nick named as the “Prince” by the media in Japan, when he took over Toyota Motors. He is the son of Shoichiro Toyoda, the man behind the success of Toyota. He is known to own assets worth $1 billion. He was announced as the forth coming president of Toyota in January 2009 and on June 23rd he was confirmed for the role of the president of the Toyota. It was confirmed along with other four new executives of the company and the eight new members in the board. A person known to be very approachable by his colleagues, he is also known as a person who is very eager to play down his famous family background. He also is known for his sudden visits to the assembly lines and dealerships as well. He is known to have a hidden infatuation for cars and racing which was very recently was shared by himself on his blog.

Akio Toyoda was born in Nagoya to the couple Shoichiro Toyoda and Tatsuro Toyoda on the 3rd of May, 1956 in the town of Nagoya in Japan. Known to be descendents of Sakichi Toyoda, who is known to have established Toyoda Automatic loom works, they have dominated the higher management of Toyota Motors. The well known and the world famous Toyota Motors has been incorporated in the year 1937. Shoichiro Toyoda, father of Akio, was born in Nagoya on February 17, 1925 and is the son of Kiichiro Toyoda.

Akio Toyota owns a degree in law from Keio University in the year 1979 and also a Master’s degree in Business Administration from the Babson College, United States of America, in the year 1982. He joined Toyota Motor Corporation in the year 1984. His career began outside the family business, and his strong background made his elevation to the president as inevitable. He is the first member of the family to lead the Japan’s biggest carmaker after this uncle, Tatsuro, who stepped aside in the year 1995 leaded Toyota in the 1980’s as well as the 1990’s. He was also a part of the team which drove the company’s Lexus super car and finished fourth in their class. It was also after his appointment, he did mention his love for cars and also said that he would strive and produce cars with which anyone would fall in love with.

Akio Toyoda’s career can be termed which includes postings in every phase of the automobile operations, which includes production, marketing as well as product development. Mr.Toyoda has also served outside Japan as the executive Vice President at the Toyota’s productions joint venture with General Motors in CA. This was in the year April 1998. In the year January 2000, he made a return to Japan and was named as one of the board of Directors of TMC in the month of June. Being in that role, he took charge of the creation and supervision of Gazoo.com, a famous website which has tons of virtual shops for consumer goods and services along with the information about some new and used cars. He also supervised the domestic marketing operations, and in June 2001, Mr. Toyoda became the chief officer of the Asia and the China Operations center and in the year 2002, he took over the position of managing director.

His Journey with Toyota Motors

Akio Toyota became the president of Toyota Motors in the month of June last year and laid a promise to him that he would steer it through its worst crisis of the century. This statement was made in reference to the global recession which left the firm with the first annual loss ever in the history of 73 years. In the span of nine months, this 53 years old executive has his preparations for the US congressional committee which showcases the firm’s safety recall of more than 8.5 million cars.

It was last year that the firm generated the highest returns and was named among the World’s five biggest automakers. Akio Toyodo is also known to be the lowest paid chief in the group with earnings as low as one-tenth as his counterpart. The firm also climbed in terms of returns this year by about 26% in dollar terms. It is hence termed by one and all that Toyota’s President delivered the highest returns for the lowest pay.

“Akio has been tested like no other CEO of Toyota in the last 30 years,” said Maryann Keller, principal at the auto industry consulting firm Maryann Keller & Associates in Stamford, Connecticut. Compared to Toyoda, “the competition is overpaid.”

In many other ways, the journey of this CEO is no different from any other CEO. He is known to be quite loyal, diligent servant of the firm which he joined as a junior manager in the 1984.

Akio Toyoda is married and has two children-one boy and one girl.