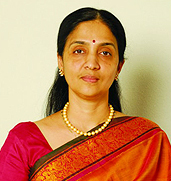 NSE played an important role in bringing about a paradigm shift in Indian financial market...

Traced in history for being as the first woman to head an exchange in India, she is the woman known for simplicity, Chitra Ramakrishna has never dreamed about leading the country’s top most bourse, The National Stock Exchange. Born in the year 1963, Ms. Ramakrishna has joined the raft of newcomers for the World’s most powerful women and is proudly ranked in the 17th place. She was a part of a core team, which introduced the screen based trading in the year 1993 and is the first woman in India to lead a stock exchange.

Chitra Ramakrishna, well-known to everyone as the “Queen of the Bourse”, helped to set up the country’s largest bourse- The National Stock Exchange of India. She started from scratch in the year 1992 and is now the newest MD and CEO who is looking to build on its success. She is someone who has never made an investment in stocks and running the India’s largest stock exchange is quite paradoxical to her.

She is known to be a media shy person and a perfectionist by many but never attracted the tag of an autocrat. Though known as a person who does not accept anything less than the best at Work, she is also known to give the freedom to work to her team members. She is known as the person who helps people grow and believes that nobody’s role should be limited in any organisation.

Chitra Ramakrishna is also the third women CEO to head a stock exchange in the Asia-Pacific region, only after Sri Lanka’s Stock exchange and the China’s Shenzhen Stock Exchange. The 50 year old Managing director of the National Stock Exchange is always known to be quite comfortable with the new challenges which come her way. It was on 1st April, 2013 that Chitra Ramakrishna has taken charge as the new CEO of the National Stock Exchange and is the first Indian Women to lead the NSE and the second women to lead the country’s bourse.

A chartered accountant by profession, from a UK based Institute of Management Accountants; Chitra has been with NSE from the year 1991 and was a part of the five member team selected by the Indian Government. She is also ranked 17th in the Fortune’s 50 most powerful women in the World.

When Chitra Ramakrishna started her initial assignment, she had a very little knowledge about shares. She joined the stock exchange in the year of 1992 which is known to be one of the worst years for bourses. It was then when the Indian markets went through a well known scandal of the trader Harshad Mehta. It was then when the government showed the keen interest to start up a stock exchange which would not have any similar problems like the BSE, and wanted it to be a professionally run bourse. To set up a transparent trading platform and is electronically driven was a tough task. Chitra Ramakrishna was a part of a team of bureaucrats and helped to make the dream a reality.

Apart from business, she is a woman who loves Carnatic music and shows her special interest in playing Veena.

A clear study of the journey of Chitra Ramakrishna indicates that she was born to become great. Ms. Ramakrishna was a part of a project from the finance division of the Industrial Development bank of India. She was later selected as for the post of Managing Director and to the CEO by the NSE board in the month of November last year to take up charge from April 1st, 2013; for a period of five years. She has been the CEO of the National Settlement and Clearing Corporation and is also on the board of subsidiaries which belong to NSE like IISL and Dotex.

Her initial brush with finance came in the year 1985 when she was in the IDBI, after she had a small stint with the SEBI. This was the period which helped her tone her financial skills, and here was the place she worked with treasury and fixed income departments. After this, she came into her own marketing of the deep discount bonds, which later happened to set a trend for discount bonds.

Ms. Ramakrishna is also known to have worked with IDBI, prior to NSE. She is also known to hold other senior positions in various other companies which are promoted by the exchange. She was also a proud member of the committee on the financial sector reforms which was headed by RaghuramRajan in the year 2008.

Her Journey with the National Stock Exchange of India

Chitra Ramakrishna, aged 50years, is a known heir to the National Stock Exchange and is a person who prefers to maintain a low profile. Never did she know that she would take up duties as the CEO and the Managing Director of NSE, years after the inception of the same in the year 1992. She was away from the limelight of the media for quote a few years now and which seems to be impossible after she has taken over the charges on April 1st, 2013.

She was one of the five handpicked, by the IDBI chairman, the late SS Nadkarni. This was the team which was responsible to set up NSE from the scratch and to create a counterforce to the then powerful Bombay Stock Exchange.

It is under a decade long leadership of Ms.Ramakrishna and Narain, NSE has risen to become a power house for equity derivatives.

Ms.Ramakrishna has been handpicked by R H Patil who is the founding Chairman of NSE. Prior to NSE, she worked along with Narain for IDBI, a promoter of NSE. She was also awarded with The Women Leader of the Year; as she helped to strike a very delicate balance between the NSE’s commercial and regulatory roles and helped NSE achieve new levels of professionalism. She also helps in promoting new products associated with NSE and implemented the cutting edge technology.

It was under her watch that the NSE launched various products which suits all classes of investors which also includes the futures and options, currency trades and also the global indices like the S&P 500. She also had a major contribution in setting up Pan-India VST network, and also building the infrastructure for the very first Depository for India, which facilitates the screen based trading. This provided trading access to all those retail investors located across the nation and even from the remote parts of or country.