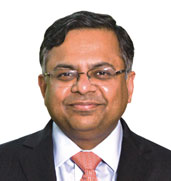 It is okay to fail, but you must push yourself, and you must go for things that will make a big impact…

A man with vision, a leader with the true sense of the term launched the brand of Tata Consultancy Services not only as one of the most consistent and promising players of the Indian Information technology Industry and have poised serious competition concerns for the other Indian Contemporaries namely Wipro and Infosys. He is Mr. Nataranjan Chandrasekaran who is CEO and MD of TCS and better known as “Chandra” in IT industry.

He hails from a family of agriculture, Chandra knew nothing of business, but he knew everything about virtues and being humble, and these ingredients marked the beginning of the most genuine CEO, who understood the value of money and what the common people strives for.

It's often said that business is a marathon, not a sprint- Chandra knows that it can be both of them. In the four years of his CEO journey with TCS, India's largest industrial conglomerate, an IT company and division of the Tata Group, the annual revenue of the company witnessed a jump from $6 billion to $10.17 billion. Presently TCS is operating from 44 countries and has over 285,000 world’s best-trained consultants.

Mr. Nataranjan Chandrasekaran was born in Mohanur (Tamil Nadu in 1963) in a family of agriculturists. He completed his schooling from a Tamil Medium School, and consequently cleared his intermediate in Tiruchi by working part time in hotels to provide money for his family. He graduated in Applied Science from Coimbatore Institute of Technology, Tamil Nadu and also was conferred a Masters Degree in Computer Applications from Regional Engineering College, Trichy, Tamil Nadu in 1986.

He began his career as a humble farmer, and worked with his father for 6 months, however the computer geek in him made to join TCS in the year 1987 as a software programmer. It is worthy to mention here, that back in 1987, he was one of the first kind from that academic background that TCS hired instead of Engineers, and the sole reason was his dedication and innovation that was noticed by the partners of the company that he worked with during his training programme with TCS.

Chandra was a visionary in the true sense of the term, since only a person of that intellect and leadership could escalate from the designation of a mere software engineer at entry level in a company to becoming the Chief Operating Officer and Chief Executive Officer in a span of 20 years. His commitment and dedication towards the TCS brand was reflected in the fiscal digits of the company rising to growth of compounded annual rate of 21 percent. His efforts helped to record the consolidated revenues of US $11.6 for the company since the year 2013.

He has been recognized as the most powerful CEO and the influential person in the sector time and again by the best of brands in the sector for instance Forbes, CNBC Asia among many others. Chandra today can be held responsible for taking the brand globally to 44 countries, and the statistics speaks for them on recording a hefty US 50 Billion in the year 2012. The pillar on which he has built this empire places customers at the very top and strives towards attaining satisfaction with quality support. Chandra’s journey in various operational roles has contributed to his business and sector sense to a large degree, and hence the niche that he has created for himself in the IT industry is by reason of his exceptional ability that not only plants the seeds, but nurtures it to grow into a plant bearing fruits- defining long term relationships.

His Journey with TCS

Speaking of the Indian IT Industry, the pioneers were obviously Infosys and Wipro, and though today Tata Consultancy Services is becoming the yardstick of the fastest growing sector of India. The company was initially regarded as the industry's stodgy stepchild. TCS has always been the most consistent and biggest players in the Indian IT Industry; however the year 2007 saw the appointment of Chandra as the Chief Operating Officer and later on as the Managing Director and the Chief Executive Officer in 2009 following which the market value of TCS doubled. Net profits of the company under pyramidical and distributive governance structure evolved by Chandra saw the escalation of 30% and even the revenue rose to 25%. He has also been the brain behind numerous strategic transitions at TCS including architecting, as the Chief Operating Officer. He also advocated numerous business initiatives at TCS and displayed the ability to nurture new ideas by adding new business lines and entering new industry verticals like Media & Information Services, Mobile & Digital services, and High Tech. Apart from adding business finesse, he has also been keen to keep upbeat with his corporate social responsibility- be it in the form of healthcare, education, wellness or environment sustainability.

It must also be mentioned here that Chandra began his journey with TCS in the year 1987 as a mere software programmer, thereafter in the year 1996 he started working with TCS as one of its partners in association with Ramdorai (CEO of TCS in 1996).

He is presently based in Mumbai and is happily married to an investment banker named Lalitha and blessed with a son named Pranav.