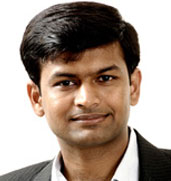 You can steal ideas but not innovation…

"Entrepreneurship is a self-purification process". This is what believed by the founder and CEO of redbus.in - Phanindra Sama. A man who believed in a vision to introduce efficiency and also a methodology into the bus travel sector is known to have a passion towards photography as well. The award winning redbus is known for bringing efficiency along with predictability to the unorganised bus travel system, making it easy for customers as well as bus operators.

Mr. Phanindra Sama is recognized as the India’s most humble and innovative Entrepreneur. A BITS Pilani Alumni, who is one of the most low-profile millionaires India has ever witnessed who in his obsession to get home to celebrate Diwali in the fateful year of 2005 gave rise to one of a kind start-up that not only nourished his entrepreneurial skill and brought it before the world but helped thousands of people out there to travel conveniently through bus.

Yes, in this era of flights and trains we almost forget of those millions of people who still prefer to travel through this mode of transport, and it was full of complications, intricacies, inefficiencies and loopholes in the process that led Sama to give birth to a Bangalore based start-up Pilani Softlabs to provide online bus ticketing services which today has become the most talked about and successful bus ticket providers with 700 operators, 10,000 buses listed running through 15 states and selling around 5,000 tickets per day.

Mr. Phanindra Sama’s family background has a lot to offer to the humbleness and modesty with which he has rocketed his start-up from level zero to the most lucrative venture capital option the investors has been eyeing in recent times. Coming from a family of means and not of prosperity, his dad was an Agriculturist residing in Adpakal village in the Balkonda Taluk of Andhra Pradesh. Like those blessed few, his family understood the importance and impact that education can bring about into one’s life and hence he was sent to a boarding school to complete his primary education, which was thereafter followed by his next years of education in Hyderabad and finally passing out with a degree in Electrical Engineering from BITS Pilani. Losing his father as early as in the age of 6, was one of the most challenging days of his life, as the entrepreneur now recalls, but it was owing to the incredible support of his mother and brothers that the man of the hour reached his euphony.

There are very few people who accept success responsibly and Phanindra Sama is definitely one of them. Coming from a family of farmers, his parents never compromised on their child’s education which has very conveniently led India to have one of the most promising entrepreneurs of recent times. His primary education began at a boarding school in Nizamabad, after which he was sent to Hyderabad to finish off his basic schooling. Thereafter he finished his intermediate courses from Vijayawada's Vignan Junior College and graduated with a degree of electrical engineering from BITS Pilani. He has also obtained a degree of post-graduation from Indian Institute of Science.

He started off with the basic corporate life and a salaried job at an IT Company for 2 years and thereafter moved to a semiconductor manufacturing and designing company knows as Texas Instruments in Bangalore, and finally the frustration in him gave birth to the entrepreneur in the year 2005 which launched India’s first of a kind online bus-ticketing service by the name “Redbus.in”, which consequently over a span of 8 years has become India’s largest bus ticketing services and have grown from their internet based customer services to offline outlets in all major cities of India.

It all started on a fateful vacation in 2005, when Sama needed to get back to home and celebrate Diwali with his family. However several trips and being devastated with the intricacies and inefficiencies of the bus transport system and unable to get one bus ticket, he had to unwillingly stay back in Hyderabad, and that spark gave rise to the start-up Pilani Softlabs known today for its bus ticketing services by the name of ‘Redbus.in’. Sama figured out the several loopholes in the status quo of travel starting from discrepancies of ticket fares to monopoly of certain operators to ineffective networking among the operators and sensed growth and solution to this problem. Over a mail to two of his batch mates from BITS PILANI namely Sudhakar and Charan came up this idea of forming an integrated transport system which provides convenience to its travelers not only in terms of booking tickets from the comforts of home, but also the benefits of comparing rates and booking return tickets. The initial years for the company were a little trouble-some, yet the ship sailed smoothly with profits raining in from the third year itself and a number of venture capitalists on their toes to invest in this prospective next-big thing of the Indian market. Thus, from a small start up with an initial investment of INR 500,000 has in the year 2013 grown up to form a billion dollar industry with competitors entering the field, and yet the brainchild of the entrepreneur continues to be the largest service provider and has extended its base from online to even offline bus-ticketing outlets.

His Journey with Redbus.in

Phanindra Sama, now as he had recalled in most of his interviews never dreamt of becoming a good businessman, rather through his endeavors he has always aimed at looking for solutions to problems, rather than complaining and serving the people with faith- and thus India in the year 2005 witnessed the first ever online portal for bus ticketing service which over a span of just 7 years not only became the biggest service provider of this kind, but also opened the prospective industry and investment opportunity of which nobody had ever thought of before. With the growth of the start-up Pilani Softlabs, soon the company was eyed by every other venture capitalist. The service started in August 2006, with the primary investment of INR 500,000 and the sincere dedication of Mr. Sama and two of his batchmates from BITS Pilani further when the idea made it to tie mentorship it made news. Though the initial years did not make any profits, yet the year 2009 brought extremely good news with 6 times growth and a turn-over of 30 Crore and finally by 2012 Redbus had sold 1 Crore tickets through its online and offline outlets with over 2 million registered users and $200 million Gross Merchandize Value mark. However in June 2013, Phanindra exercised a very viable exit option with this start-up by selling of the same to the Ibibo Group, a joint venture of South Africa's Naspers and China's Tencent and though the management of the company has changed ever since, Sama still continues to be the CEO.

He is believed to be happily married to Sarika.