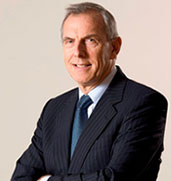 The Indian customer is value aware, easy to speak out…

It is said that with age, a man becomes wiser. A man, who is known to be always Happy to Help, did take ahead the brand Vodafone with the same motto and spirit. He is known to be a person complete of abilities and skills which have proved very beneficial for the company he is been associated with.

Mr. Pieters is known to have an ardent attitude and a charm along with a dynamic personality that helped Vodafone touch new heights which no one could have ever imagined given by the constant tax hassles with the Indian Government and the scarcity related to spectrum bidding and the scams attached. He is said to have begun his career with the Royal Smilde Food in the year 1977 as a lawyer and consequently served in various management positions in his on-going career. A man who believes in innovation and doing things better has always been a great inspiration to many.

Emerging from a family of means and not of extravagance, he understands the difference between necessities and luxuries of life. Hence not only the entrepreneur in him invested in India as the CEO and MD of ‘Vodafone India’ Group to make money out of the goldmine in the third world nations namely “India” in which almost all major enterprises had their eyes and claws. He also made an initiative to make communication available to Rural India, and that is what sets him apart in his class. His able guidance not only saw the rise of Vodafone into the second largest telecom service provider in the Country but also the third best service provider in terms of quality which promised to connect Rural India in the same way as Urban India- and for the generation today he widened the scope of Data transfer in the form of 2G and 3G. A Man of tact and diligence, Mr. Pieters is a role-model for all those who believes in taking risks and can touch any venture into profit by sheer hard work, insight and a pinch of modesty.

He was born in 1953 and relates to his Dutch Upbringing for being the grounded realistic person as he is. Belonging to a family of hair-dressers and not the Industrial Big-shots, adds a touch of Modesty and Humbleness to his Organizational and Management style. A careful perusal of several speeches and addresses that has been made by Marten Pieters one of the key facets that is noticeable would be his abidance for the law and respect for the regulatory mechanism. The reason for the same could be attributed to his Education as the person himself graduated with a degree in Law with a Major in Economics in the year 1977 from the Groningen University in The Netherlands. Both of these spheres of Education have thereby helped the visionary in achieving the Entrepreneurship skills with which he as awed the world today.

The Successful Entrepreneur today, began his career after graduation as an in-house counsel in one of his household confectionary namely Royal Smilde Food Plc and soon enough the business man in him outgrew the lawyer, so there he moved to Economics as the MD of one of those subsidiaries. The Year 1989 saw him joining the KPN as their Commercial Director and the MD of Telecom Region and within a span of years pushing the Postal and Telecom Service-Provider in the emerging countries Eastern Europe, Asia and Africa holding the designation of executive vice-president for KPN International. Consequently the year 2003 saw Marten Pieters as the CEO of an African start-up called Celtel International, which however in the year 2007 was sold to MTC Kuwait (Zain) and the year 2008 witnessed him non-executive board member of telecommunications group Millicom International Cellular SA in Luxembourg.

Martin Pieters, who graduated with a degree in Law with a major in Economics, never thought that the Economist in him would bulldoze the Lawyer and create the most successful CEO’s of recent times. Starting off with a humble career in confectionary, within a span of 20 years he had worked in executive and directorial positions of certain major telecommunication brands such as KPN and Celtel, which today is the second largest Telecom Operator in African Mobile, which then was serving across 20 million customers in more than 14 countries. From the year 1989 till 2003, he worked with KPN where in the year 2000, he was elected as the Member of the Executive Management within the board of the KPN telecom.

Martin Pieters has joined Vodafone India as a subsidiary of Vodafone Group PLC as the Chief Executive Officer in February 2009. Since then he has been serving as the managing Director and the chief executive officer of the Company.

The journey of Marten Pieters with the company cannot be stated to be cake-walk, and was much often hit with headlines of tax controversies and extended litigation with the Government, the complications set forward by the Spectrum Trading Rules, Bidding Complications- however none of it could hinder the Company’s growth strategy which finally hit a record of an Exponential Revenue Growth of 10.6% in the Financial Year of 2013 and enhancing India’s contribution to the Vodafone Market by 10%. Further he is the man who bought about the concepts of MNP, Data Usage at the speed of 2G and 3G and extending hands of communication to Rural India with imbibed corporate social responsibility and qualitative services.

He is married to Dettha and blessed with four sons.