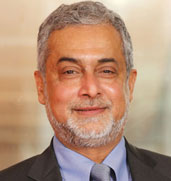 The volatility that we are seeing is not just a passing phenomenon....

This corporate tycoon has set many milestones in his career, and the recent one is being appointed as the Chairman of Microsoft India. His recent endeavors include being appointed as the Chairman of Microsoft India who is responsible for overall sales, marketing and other transactions across India. Prior to the joining in Microsoft India, Pramanik was serving as the Managing Director of Oracle and before Oracle Pramanik was serving as the Corporate Vice President and President, India GEM of Sun Microsystems India along with holding the responsibilities for the overall operations of the subsidiaries in India. His total spanning careers accumulates very rich experience of more than 35 years in the IT industry which makes him stand different from others.

Pramanik has been associated with the Microsoft for about two years since March 2011 after leaving as Managing Director of Oracle. His accolades also include working with the Sun Microsystems for 13 years as its Managing Director. His last designation in Sun Microsystems was that of Global Vice President, Commercial Systems at the US Head Quarters.

He played a key role in strengthening the company’s position and grip in Indian market. Pramanik has also served at various designations of senior management positions in various companies like Digital Equipment Ltd, Blue Star Ltd and NELCO.

Pramanik is always keen to have his presence in every corporate affair and due to this he takes a keen interest in joining and being elected as the EC of NASSCOM. His views after being elected as the EC include working in collaboration with other delegates towards defining the right strategies which in return will maximize the NASSCOM’s effect in this new era of technology. In order to accelerate the growth of the IT Industry Pramanik needs to have alignment with the central and state government rules, regulations and policies which will help NASSOM in building its alignment and giving new directions to the IT Industry.

Pramanik’s keen interest in getting collaborated with the EC delegates to make stronger connections in the market will lead to create an everlasting impact on the Indian market. Pramanik is keen on becoming an EC and expanding his contacts since India is no more a preferable country for the MNCs and the main reason is the government’s decision to put the FDI on hold, and this leads to depreciation in the image of the country. Although he had quoted this statement in one of his articles, but he his reluctantly trying to help India in overcoming with this problem.

After joining Microsoft Pramanik has been continually striving to make Microsoft India as one of the fastest growing subsidiary and for this he has chalked few strategies which would enable Microsoft to gain the platform one day.

Born in the year 1951 in West Bengal, India Pramanik has a spanning career of more than 35 years and has witnessed many changes in the IT Industry. Pramanik is a graduate from the IIT Kanpur and has also graced his presence in Advanced Marketing Management Program held at the Stanford University.

He has a spanning career of more than 35 years and has witnessed many ups and downs in the IT industry. Before joining the Sun Microsystems Pramanik has also served in several managerial positions in companies like Digital Equipment India Ltd, Blue Star Ltd and NELCO and also as the Director of Enterprise Sale in Singapore. His early served designations include serving as Vice President, Sales & Marketing, Digital Equipment Ltd and he was also the part of original Country Management Team and was held responsible for setting the joint venture in India.

After serving at various designations Pramanik’s careers took a kick start by joining the Sun Microsystems in November 1997 and has played a key role in building the Sun’s presence in the Indian market. For the past 8 years, Pramanik has received many outstanding achievements, and in October 2004 Pramanik also received the Sun Leadership award.

He has also served as the Managing Director of Oracle India Private Limited and as the Vice President of Global Commercial Systems Sales at Sun Microsystems India operation from 1997 to 2008. He joined Oracle as the MD on 1 April, 2010 and in less than one year he left Oracle in order to hold the designation of the Chairman of Microsoft India from March 28, 2011. Pramanik holds the direct reporting of 5,300 employees under him while he reports to Jean Philippe Courtois, the President of Microsoft International.

An engineer from IIT Kanpur Pramanik is currently serving at the designation of Chairman and Director of Microsoft Corporation (India) Private Limited and manages the sales and overall sales, marketing and other transactions across India. Pramanik is also responsible for the R&D facilities of Microsoft

Pramanik also has an active involvement with the Indian IT industry since the year 1982. He is wonderful orator and has expressed his views on the computer and telecom related topics. Pramanik has also addressed many public forums along with industry meetings. Pramanik is also a consistent member of various committees in CII, MAIT, and NASSCOM. He also served as the Chairman of the American Chamber of Commerce, Karnataka for the year 2003 to 2004 and is currently a member of The Executive Council of NASSCOM.

His journey with Microsoft

Pramanik’s journey with Microsoft started in March 2011. Presently serving as the Chairman of the Microsoft India. His roles and authorities include managing the role and responsibilities for marketing, operational and business development in India. Pramanik also holds the single point leadership dice which also include the R&D facility. Pramanik will be responsible for the Microsoft’s overall operations in India which also includes managing 5,300 employees located in two development centers in Gurgaon while he sits in his office located on the 9th floor in the DLF City.

In order to give Microsoft new height in the Indian market, Pramanik has chalked out four strategies. These are the strategies which have helped Microsoft in coping with the uncertain conditions and situations. The first strategy is the “living our culture and values” while the second strategy is to adopt the method for long term investment which would serve both in the good and bad times. The third strategy is to have a firm focus on the operation, execution, decision making and analysis and the fourth strategy is to incorporate the right kind of leadership in the organization which would lead to new innovation helping to face the uncertainty.

Pramanik lives in Gurgaon with his wife Madhumita and two children. His wife Madhumita is involved with NGOs and she is also active in the Times of India’s “Tech India” program. His areas of interests include photography, reading and playing golf.