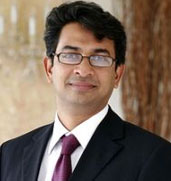 Information technology is transforming our future…

Considered to be an angel investor in the technology field, he is on a roller-coaster towering that does not have any plunge. Rajan Anandan is a Sri Lankan who is the head of Google India. Anandan has rendered impeccable services as the Managing Director, Microsoft’s Sales Marketing and Services business in India. Rajan has also worked at Dell as its Managing Director. Prior to serving in Microsoft and Dell, Rajan had also worked for McKinsey where he was associated as partner. Rajan is also an active investing agent in the technology companies and has invested in mobile, internet and software startups in India, and brought a deep sense of technology by understanding the latest technology trends along with maintaining a track record of investing in many sectors across the industry.

Rajan’s favorite work is of an cherub shareholder, and he has invested in some 40 technology startups in India. Being the Co-Founder of Blue Ocean Ventures, which in Sri Lanka’s first seed fund and also owns more than 10 investments in Sri Lanka. He has a spanning career in technology and management consulting. Currently Rajan is serving as the Managing Director and Vice President of Google India and handles all the operations in India.

While serving at Dell, Rajan had held several global leadership roles. He started his journey as an Executive Assistant to the Chairman and CEO Michael Dell and after that he had held several global roles which also included leading a large part of the Dell International Services and held the position of VP and Country General Manager of Dell India. He marked the beginning of his career by entering into a partnership with the McKinsey and Company and continued this partnership till the year 2003. At McKinsey, Rajan was dealing with Chicago branch and used to deal with the Fortune 500 companies.

Currently Anandan is serving as the Managing Director and Vice President in Google India and deals with sales and operations of Google India. Rajan’s journey with Google began in the year 2011, and prior to this he had a track record of serving McKinsy and Company, Microsoft and Dell. Under his energetic leadership, Microsoft was recognized as the number one subsidiary company among the emerging markets of China, Russia, Brazil, Mexico, Turkey, South Africa and India as well. Prior to serving in Microsoft, Rajan had served in Dell and his risk aversion attitude turned the Dell’s business from $250 million to over $800 million.

Rajan Anandan is born in Sri lanka and son of former Guinness World Record holder V.S Kumar Anandan who also holds a record of swimming the Palk Strait from Sri Lanka to India and back in 51 hours in the year 1971. While attempting to swim the English Channel on August 6, 1984 he died due to the heavy currents, and he was a graduate from the University of London and also obtained the Bachelor of Laws degree in Sri Lanka which at that time was known by the name of Ceylon. He was an Attorney at Law by profession.

Rajan holds a Bachelor’s degree of B.Sc. from Massachusetts Institute of Technology and also earned his Master’s Degree from Stanford University in the year 1992. He is a Sri Lankan Tamil and is also one of the known investors and advisors at Socialblood and Capillary Technologies. He started his career with the McKinsey and Company as its partner and then switched to Dell, Microsoft and currently serves in Google.

Rajan serves as the Managing Director and Vice President of the Google India holding the responsibility of Sales and Operations in India. Rajan frames for Google that since the inception in the year 1996 has grown by leaps and bounds.

Rajan is the Founding General Partner and Chairman of Blue Ocean Ventures and co-founded it in the year 2010. He has been serving in Google since January 2011 as the Managing Director and Country Head of Google India and also as the Vice President of Sales and Operations India at Google Inc. Rajan also serves as the Member of the Management Board for myZingo eCommerce Service Pvt. Ltd and also serves as the Advisor at the India Internet Group. Rajan’s main focus is on investing in internet, mobile and SAAS companies.

Previously he use to serve as the Managing Director of Microsoft India and as the Managing Director and Head of Sales and Marketing Operations at Microsoft Corporation (India) Pvt Ltd since September, 2008 to September, 2010. He was also responsible for driving and deciding upon the course of action regarding the strategic partnerships and alliances thereby enhancing the growth prospects of Microsoft India. He had also served as the Country General Manager of Dell India Pvt Ltd from May 2006 to June 2008, and he joined Dell in the year 2003. While working at Dell he had also held many global leadership roles across the Dell International Services which included his delegation of authority to Michael Dell the Chairman of Dell Computers and moved to India in the year 2006 serving as the Vice President for Dell India. Prior to shifting to India Rajan Anandan was working from his Chicago office as a partner of McKinsey Company. From the year 1992 to 2003 Rajan started his career with the McKinsey and Company as its partner by holding several leadership positions which also included its Growth Practice from 1996 to 2002.

His journey with Google

His journey with Google started in February 2011. He is also keen to work with NASSCOM in order to accelerate and penetrate into the usage of Internet in India. Rajan also says that the next phase of growth of the Internet will be driven by the local languages. He throws a light upon the engineering teams of Google in Bangalore who are into building global products along with the marketing team. He also says that Google has built distributed development cells around the world. Beneath his esteemed guidance, Google witnessed a growth in the consumer database from 40% in the year 2011 to 120% in the year 2012.

When asked about the employee retention technique followed by him, Rajan pondered by quoting that in Google, they do not take much pains to retain the employees since their process recruiting and hiring includes a total of 5 to 9 rounds which makes it incredibly rigorous. There hiring process is so hard since they aim to hire smart people who can work well together which also empower them to take decisions on their own. This leads in creating a collaborative culture where the people are able to think big and are also risk averters.

Rajan also tells about the Google’s upcoming plans such as ‘India Get Your Business Online’ which would help the Indian small scale business go-online and the Women Entrepreneur on the Web programmed which has an aim to help the Indian women to grow their business through the online medium.

Rajan Anandan is married to Radhika and has a daughter named Maya. He prefers to spend time with his family and gets involved into some outdoor activities like swimming, biking, going to the park or rock climbing. He is also an art collector by proxy. He has adorned this habit since his wife is quite knowledgeable and interested in it which has led him to develop an interest. He says that this thing they both do together which is very valuable to him.