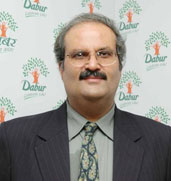 We expect consumers in the rural India…

Sunil Duggal is an Indian entrepreneur and business executive. Currently he is serving as the Chief Executive Officer of Dabur which is India’s largest Ayurvedic medicine manufacturer. He is a person who has the ability to turn the tables. He started his training as a management trainee at Wimco Limited in 1981 after completing his engineering degree in electrical and electronics from BITS Pilani and Business Management from IIM, Calcutta.

His stint at Wimco continued till the year 1994 while in between he also joined Bennett Coleman & Co. Ltd. though for a very short span of time. In the year 1994, Sunil moved to Pepsi Foods as the General Manager for the Sales Department. In the year 1995, he entered and became the member of the Dabur India family. He joined Dabur as the General Manager for the department of Sales and Marketing of the family products division with a variety of products like Dabur Amla, Lal Dant Manjan and Vatika adding in his portfolio.

This division witnessed a drastic growth which was recorded in the history of Dabur. Vatika was launched in this period only and is now the biggest brand name for the Dabur. Climbing the ladder of success very soon Sunil became the Vice President and SBU Head of the Family Products Division. In July 2000, Sunil got appointed as the Director Sales and Marketing of Dabur India Limited. In the year 2002, Sunil became the CEO of the company which proved to be of professional with valuable experience to take the company in its growth plan.

In the span of 20 years career he has travelled a lot across India and also handled diversified portfolio which have also helped him in understanding the dynamics of the FMCG businesses and market trends. Sunil is well versed and acquainted with the intricacies of the India’s regional diversities and the growing consumer needs.

Sunil Duggal initially took over as the Chief Executive Officer of Dabur India Limited in the year June 2002. He started his training as a management trainee in Wimco Limited in 1981 after getting his engineering degree in electrical and electronics from BITS Pilani and Business Management from IIM, Calcutta.

His vision and enlightenment had helped Dabur in attaining all the achievements and emerging as one of the leading family brands in the market. Market trends reveal that Dabur is the most liked brands by the families of the India. His core strength lies in foresightedness and his continuous efforts to achieve the success. It can be said that his personality carries an enchanting aura which simply attracts the person and his abilities also make the complex problems easy. He started with many strategies which helped Dabur in achieving the dice of the most liked brands despite of the presence of other competitors in the market.

Ageing 56 years Sunil has a vision of being dedicated to the health and well being of every household. It has been 10 long years since he is serving in the Dabur India family and earns a total salary of INR 12,596,000, along with this salary he holds a total annual compensation of INR 52,758,620 with the total number of options accounting to INR 166,544 which makes a total compensation of INR 55,360,257.

When Duggal pushed Dabur into the market to announce that the company was pouncing upon the FMCG brands in September 2004, it made most of the existing companies amused. Sunil initiated the quick restructuring and virtual demerger of Dabur’s INR 1,629 mn pharmaceutical business. Under this new set-up the new pharmaceutical business would continue to remain under the flagship brand name of Dabur but will be a totally different entity having a separate business, separate business heads, separate functional heads and even separate books of accounts.

Following this setting up of new ventures, in November 2004, Sunil took a decision to undertake another restructuring which was aimed at enhancing the focus on the brands and Dabur’s health care business. The Family Products Division was merged with the HealthCare Products Division to make the Consumer Care Division and a separate division was created for the traditional Ayurvedic business of medicine named Consumer HealthCare Division which was totally a different section from the FMCG business. This new division was set up to look after the prescription based Ayurvedic medicines under Dabur’s fold and over the counter products.

It also allowed Sunil to diversify into several other products through the medium of a new division such as pain relief, stress management, cold relief products and the antacids. In order to drive the core brand competencies into the market Sunil sanctioned an increase in the budget. Like other FMCG companies over the past five years Dabur has made a steady growth and has improved its procurement and distribution systems to achieve a significant reduction in material costs. Sunil invested most of the savings in the brand building efforts and increased into the ad spend to sales ratio. Dabur has also adopted some global marketing techniques in order to promote the food products and also allocated an advertisement budget of INR 100 mn for mass media advertising and promotions.

The thrust of brand building led towards the development of a new corporate identity in the year 2004. As per the Sunil Duggal, Dabur’s brand equity had to be more in synchronization with the brand architecture and for this, a drastic change was required. The logo of Dabur, the banyan tree gives Dabur a more younger and refreshing look.

His Journey with Dabur

For Dabur Sunil also quotes that they have seen a steady quarter and when talking in terms of revenue they have marked an increase of 13% with a growth in profit of 25%. They have also seen an improvement in the material cost revenue ratio from 50% last year to 49% for this year. Although Dabur has witnessed a growth but this growth is not what they were thinking to be. Sunil also pointed out that they cannot rule the eventuality but can consider the lead indicators in terms of growth for the last one year. Duggal also embarked upon the new beginning by estimating a budget of INR 50 mn in order to communicate the new identity.

Sunil has a wife and a child and lives in Delhi and whenever he gets a break from his hectic professional work schedule he prefers to spend time with his family.