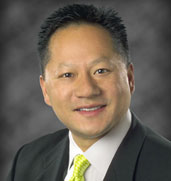 A great tablet is better than a cheap PC….

Jen Huang, an inhabitant of Taiwan is an American entrepreneur and business man. He is a unique technology leader. After serving Advanced Micro Devices, Inc. (AMD) and LSI Logic Corporation for almost a decade, he cofounded NVIDIA an American based global technology company operating across the world in the field of visual computing, supercomputing, mobile computing and cloud computing. He is the President and Chief Executive Officer of the company since its inception. Under his astute leadership and management, NVIDIA has grown astoundingly over the years and has become a market leader in the field of visual computing, and PC and professional graphics technology. Under the leadership of Jen Huang, NVIDIA also gained expertise in programmable GPU’s which did help them to achieve a breakthrough in parallel processing. This also made computing more affordable and also highly accessible.

Jen Huang - a Taiwanese-American, was born on 17th February, 1963 in Taipei, Taiwan. He spent his early childhood in Oneida Baptist Institute. His family moved to Oregon after leaving Oneida Baptist Institute. Jen Huang was very good at athletics from his childhood and started playing table tennis at an early age in downtown Portland. At the age of 15, he secured third position in junior doubles at the U.S. Open table tennis championships.

Jen Huang graduated from Aloha High School located in Portland. He received his BSEE degree (undergraduate degree in electrical engineering) from Oregon State University in 1984 after he moved to California. He was brilliant in his studies and joined as a microprocessor designer at Advanced Micro Devices, Inc. right after completing his collegiate education and later served as Director of Coreware at LSI Logic. He received his MSEE degree (master's degree in electrical engineering) from Stanford University in 1992. After this, he used his business acumen to rise to the occasion and become a renowned businessman in this information technology era.

Jen-Hsun Huang co-founded of NVIDIA in 1993. NVIDIA, headquartered in Santa Clara, California, is an American based technology company serving the world in visual computing, supercomputing, mobile computing and cloud computing domains. Jen Huang, through NVIDIA gave a breakthrough technology to the world by inventing graphics processing unit (GPU) that improvises the performance of various systems and applications. Under his leadership and guidance, NVIDIA has set new standards in the world of visual computing and system on chip solutions. Since its inception NVIDIA has set new standards by inventing new breathtaking technologies in the field of visual, super, mobile and cloud computing and till date the company has secured more than 5,500 U.S. patents granted, allowed or pending.

Supported by his business acumen and vision, NVIDIA has grown by leaps and bounds and at become the chief rival of AMD Graphics Technologies in the high performance GPU market. He started the company by manufacturing PC graphics and gradually ventured into the business of professional graphics. The company now employs over 8,000 employees worldwide and has shipped over one billion GPUs till date. In 2012, the company earned USD4.2 billion in revenue. As of May 2013, NVIDIA has a market capitalization of USD7.79 billion.

Deep rooted in visual computing, NVIDIA, under the visionary leadership of Jen Huang, diversified into supercomputing, mobile computing and cloud computing. The company started with PC graphics and gradually expanded to professional graphics and has become an international standard in visual computing. At present, along with GeForce, the company also manufactures and sales Quadro – a computer-aided design and digital content creation workstation graphics processing product invented in 2000; Telsa – a general purpose GPU for high-end image generation applications in professional and scientific fields specifically used in supercomputing; Tegra – a mobile super chip and system on a chip solution that powers the next generation of mobile devices, in-car safety and infotainment systems; and nForce – a motherboard chipset for AMD Athlon and Duron microprocessors. Its breakthrough technology in parallel processing has made supercomputing inexpensive and widely accessible.

Jen Huang not only focused on organic growth, but also grew worldwide through mergers and acquisitions. At first in 2000, after its huge success with GPUs, NVIDIA acquired the intellectual assets 3dfx – one of the biggest graphics companies in 1990s and one of its rivals. In 2002, NVIDIA acquired Exluna that made software rendering tools. Later on, in 2003 the company acquired MediaQ for USD70 million; in 2004, it acquired iReady – a provider of high performance TCP/IP and iSCSI offload solutions; in 2005, it acquired ULI Electronics; in 2006, it acquired Hybrid Graphics; in 2007, it acquired PortalPlayer, Inc.; in 2008, the company acquired Ageia Technologies, and in 2011, NVIDIA agreed to acquire Icera, which manufactures baseband chip in the UK, for USD367.

It is because of his visionary leadership and exceptional management that NVIDIA was named as the Company of the Year for 2007 by Forbes magazine for the company’s phenomenal growth and achievements during the previous five years.

Jen Huang married Lori, his engineering lab partner from Oregon State University. The couple have two children. He is a workaholic and most of the times he works at his home after dinner until he is tired to sleep. He leads an excellent family life. However, his larger than life achievements and astounding professional life has overshadowed his family life due to which not much information is available about his family life.