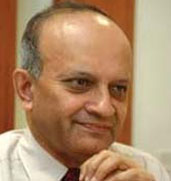 Banking is not rocket science….

The man who provided the lead to bring an astounding turn around to Axis Bank, formerly UTI Bank was none other than the illustrious Chairman and CEO of Axis Bank- Pangal Jayendra Nayak. His dynamic personality and his courage of conviction gave him the crown of success. Workaholic by nature and profit centric by duty, Mr. Nayak created several benchmarks in the industry of worldwide business and banking sector through his acumen. He has been a passionate banker who valued his ideas, and implemented them with firm hands. Mr. Nayak never deviated from the path of his conviction, come what may. He chose rather to be sidelined than compromise on his convictions. A man of courage with intellect had the essential leadership qualities to take the organization to new heights during his stint with Axis Bank. His cast-iron determination was instrumental in turning the tables, and making the Bank basked in brilliance. That he had to quit the post he held in a huff is a sad tale about a man so intelligent and enterprising.

Nayak was an intelligent child with calculative mind from the very beginning. Being born in an affluent family of Karnataka, he got best of education in schools and colleges. He had the opportunity to go to Britain for his post graduate and Ph.D. He successfully passed the civil service examination of India, the highest by then, and reached the pinnacle of glory in his life. Before his initiation with the private sector stint, Mr. Nayak had been an IAS officer of Karnataka cadre. He did his MA and got Ph D from Cambridge University, U.K. He was initiated to the Indian sector in 1996, when he became the executive trustee of Unit Trust of India later christened as Axis Bank. He discharged his duties as an IAS officer in different capacities before joining the financial sector.

Mr. Nayak, the chairman and chief executive officer of Axis Bank Ltd, came at the helm of affairs in January 2000 and carried it to newer heights. His track record is simply unquestionable. After getting the driver’s seat as Chairman and CEO of the erstwhile UTI Bank Ltd., a quasi-government bank, he led it to become the third largest lender among the private banks. During his tenure, the net profit of Axis Bank grew at a compounded annual growth rate of 40% at least. The other parameters like deposits, advances and total assets recorded impressive growth. Being an ex-bureaucrat, he had the acumen to shift the focus from acquiring assets to quality assets, cut wasteful expenditure and cost, expand the network, and build an efficient and strong IT platform. That is why; the net profit of the Bank for the year 2008-09 increased by 60%. The NPA portfolio was among the lowest while the margin among the best.

His selection as an IAS officer is the first indication of his brilliance and intellect. His academic achievements speak volumes about his intelligence. Before joining the erstwhile UTI Bank, he served in the department of economic affairs, ministry of finance, government of India where he had been a joint secretary as the in charge of capital markets division. It is no mean achievement that he worked with Manmohan Singh, the then finance minister as joint secretary in the ministry of finance during the 1990s, the reform years. He handled capital market, and looked after commercial borrowings for five tumultuous years before resigning from the civil services. His stint as a top bureaucrat with good reputation was very much helpful for the Bank as he procured deposit and other largesse from the government departments for the Bank. The goodwill and support that he enjoyed as a bureaucrat stood in good stead during the initial years of his stint with the financial sector.

Journey with UTI and Axis Bank

He started his journey with the financial sector by joining the erstwhile UTI Bank Ltd, the precursor of Axis Bank, in January 2009, after quitting his civil services job. During the initial years of his stint with the Bank, he benefitted from his goodwill and support he had as a civil servant in the government departments, and garnered deposits and other benefits for the Bank. He transformed Axis Bank as the UTI bank which was subsequently christened, as a viable and throbbing bank. The profit of the Bank both gross and net increased by leaps and bounds. Other parameters such as deposits, advances, NPA, quality of assets, and overall performance of the Bank were astounding during his tenure.

However, his stint with the Bank had been tumultuous. He had been a great performer, but he is branded as autocratic and headstrong. His rigidity was a point of discussion and concern. In 2001, he proceeded on leave for some weeks until a panel gave clearance to him with respect to his role in the merger of the ailing Global Trust Bank with UTI Bank which ultimately did not materialized. It was due to his refusal to pay the royalty to UTI that led to the bank being renamed as Axis. He is accused of not building the second line capable of running the Bank efficiently. Before resigning finally on 20th April 2009, he had offered to resign on two previous occasions, but was persuaded to continue. In 2007, he resigned when RBI advocated splitting of positions of chairman and chief executive. He refused to carry on with the truncated role, but was counseled to continue by the board passing a resolution recommending his name for the post of executive chairman for a further period of two years, and RBI agreeing to it.

His quitting the Bank preceded a drama under which he objected to the appointment of Shikha Sharma, the then CEO and Chairman of ICICI prudential LIC Ltd., as a new CEO and MD of the Axis Bank. Nayak wanted an insider Hemant Kaul, the head of retail operations of the Bank, for the post. His was the only dissenting vote among the 10 present and voting. He was of the opinion that Sharma did not have the expertise to run the Bank while the management thought Kaul to be lacking in overall knowledge. Hence, Nayak resigned in April 2009 in a huff three months before his scheduled end of his stint. It was an epoch making event, and it attracted worldwide attention.

He is married and has children. He belongs to an affluent family of Karnataka state, India. He has a peaceful and happy family life.