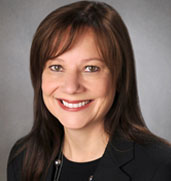 We have sophisticated systems at GM which can be honed for different markets….

She is acknowledged as the 41st most powerful woman in the world and she is the first female Chief of Product Development at the General Motors (GM). She has been the Senior Vice President at the Global Product Development at General Motors from 1 February 2011 and performing a stellar role in design, engineering, program management and quality for General Motors’ vehicles around the world Before she was engaged as Vice President of Global Human Resources at the same company from 30 July 2009 until the time, she took over the position of Senior Vice President. Mary Barra is the dynamic woman who has also served as the Executive Director in the department of Vehicle Manufacturing Engineering in GMC, which was known as MLC (Motors Liquidation Company) from 1 February 2008 to July 2009. Not only this, Ms. Barra had been always energetic, vibrant and self motivated in life. She has held in many positions including staff and engineering posting, Plant manager at the Detroit Hamtramck Assembly Plant, Executive Director for Competitive Operations Engineering and General Director for Internal Communications in GM, North America. She was named in the North American Auto Industry among 100 leading Women in Automotive News in the year 2005 and 2010 which brought her fame and prosperity. To add more to her glory, she was awarded with the Kettering Alumni Association's Management Achievement Award for her exploit contribution along with lasting and positive effect in the line of work in management.

Early in 1980, she started her career with GM as GM Institute –The Kettering University, co-op student in the Pontiac Motor Division. Since then, in the year 2005, she has been the Director of the General Dynamic Corporation. She also hands out on the Kettering University Board of Trustees & the Inforum Center for Leadership Board of Directors. She holds a BS degree in the field of Electrical Engineering from Kettering University (General Motors Institute). Apart from this in the year 1990, she received a degree in Masters in Business Administration from Stanford Graduate School of Business. She joined in GM as a co-op student while she completed her electrical engineering degree at the age of 18 years to fill the tuition fees. She was honored with GM fellowship to complete her studies at Stanford Graduate School of Business.

Mary Barra is now 51 years old and resides in the suburb of Michigan. She is the proud mother of two kids. She lived with his husband who is younger than her and aged only 26 years. As she had a keen interest to keep pets, she is a new owner of a dog.

When Ms. Barra started GM plant and its 3 big brethren were competing market share with other competitors of Japan such as Toyota and Honda who are well known for their reliability in US. She expressed her faith by dumping the Chevrolet and establishing public trust on GM. In the year 1988, with the help of Gm fellowship; she earned a MBS degree from Stanford. In early 2000s, GM was encountered with such problems related to healthcare, pensions, cost of structures etc. To reduce the gap, GM and other automobile making companies exposed the over-priced features, which included advanced electronic and plush interiors. They also gained momentum by earning huge profit margins by manufacturing huge SUVs and trucks. In the year 2008, fiscal crisis pushed Chrysler and GM to bankruptcy. To dwell with this situation, she worked day and nights together without sleep to overcome the situation. She also thought, the company will definitely survive with the same spirit and her efforts. Only few billion of dollars in the federal was left with GM. In 2009, Government approved her to run the HR division. In the year 2011, she was made the head of global product development by CEO, Daniel Akerson. This placed her single step beneath the CEO in the ladder of GM corporate word. She began her term with all the difficulties in picture. The company shed much of the weight of the collegial cost structure, which helped in rising from bankruptcy. The company started to scrape up in profits and was getting closer to its competitors. GM introduced the Chevrolet Cruze, to amalgamate the mileage with performance and the youngsters were targeted for this vehicle. This was the biggest challenge and risk for Barra and company with the re-launch of SUVs, truck and Silverado. Now GM has emerged as an automotive group with the best selling cars. It will remain as the leader and pioneer in the car making for many years to come.

Mary Barra goes in-depth understanding problems or challenges that company faces. People will rely on GM vehicles for their true quality and performance features. Repeating this process is simple if you think so or hard, depending on your perception of the mind. The Detroit carmakers are indebted to Barra for putting together the components at right places namely-technology, performance, efficiency and quality. Bob Lutz use to take care of the design savvy product before Barra took over. Analysts say that under Barra’s supervision the company has developed more team building skills. They also say that Bob and Barra are diametrically dissimilar. Where Bob would say “often wrong but never in doubt” there Barra would be like “let’s all shape it out collectively”. She would call for “hall meetings” to ask for suggestions on project direction while also challenging the engineers to rethink their assumptions and designs. Personal affiliations of Barra: