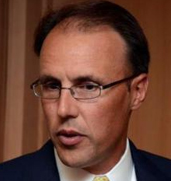 Whenever we talk about FactSet, one name peeps into our head directly, and it is none other than Mr. Philip Hadely. He joined FactSet Research Systems Inc. in 1985 as a Consultant. He was the Vice President of Sales for three years from 1986-1989. In the year 1989-2000, he was appointed as Senior Vice President, Director of Sales and Marketing. Before joining FactSet, he was working with Cargill Corporation.

His dynamic personality and ardent behavioural attitude towards his work has made him senator in the field of financial and analytical software as well as information and technology sector. He has charming personality and has always been positive throughout his work, life and the targets he has to achieve. His magnificent performance in the field of financial sector helped him to stand out in the corporate world. His dedication, devotion, determination and audacity have helped him being a confident persona.

An American business tycoon, Hadley is the Chief Executive Officer (CEO) of FactSet Research Systems Inc. His dynamic personality and his hard work have paid him success till today and still achieving. His certainty, boldness, courageous attitude has helped to build the organisational profits and become successful today. He is the person who has tremendous skills and abilities which have always been fruitful for the company. His intellect, knowledge of history and understanding the business has set him apart from others.

Hadley is blessed with superior interpersonal skills which stimulated him to resolve complex issues and motivate staff for peak performance.

In 1962, Mr Philip Hadley was born, and today he is 51 years old. He has done his primary and secondary education from United States of America. He was graduated from the University of Iowa and received Bachelor’s in Business Administration (B.B.A) in Accounting. He then also completed his CFA degree i.e. Chartered Financial Analyst. His consistency of work, endless efforts and greater profundity has brought him at his desired place and position today.

At present he is the member on board of Chartered Financial Analyst Institute. His current Board term expired in concurrence with the Annual Meeting of Stockholders for fiscal in 2012. He is also serving as a member of the board of advisors of Kum & Go.

Even at the age of 51, Hadley’s spirits are very high, and he starts his day with new commitments and tries to fulfil them by the end of the day. So far, FactSet Research Systems Inc. has greater than 1000 employees and annually registers more than five hundred million in income. In the field of Information Technology & Services industry, Philip Hadley has 28,305 colleagues in 2,967 companies located in 89 countries. 21,530 executive movements have been recorded in the last 12 months.

He is presently performing efficient tasks and serves as a member of the Board of Advisors of Kum & Go.; Hadley received a B.B.A. in Accounting from the University of IOWA, has earned the right to use the Chartered Financial Analyst title and is an energetic member of the CFA Institute. He is constantly documented for marvellous performance and results.

Mr. Philip Hadley joined FactSet Research Systems Inc. in 1985 as a Consultant with the consulting team. He was the Vice President of Sales for three years from 1986-1989. In the year 1989-2000 he was appointed as Senior Vice President, Director of Sales and Marketing. In 2000, Mr Philip Hadley was appointed as the Chairman and Chief Executive Officer (CEO). With him as the CEO, in July 2012, the Company also acquired news management company, namely the Street Account LLC.

Along with his guidance, in 2011, company also was nominated for FORTUNE's “100 Best Companies to Work For” with his hard work and dedication.

Fiscal 2012 was the company's 34th year of operation, its 32nd consecutive year of revenue growth, and its 16th consecutive year of positive earnings growth as a public company overall with great spark. It is one of only three United States of America’s public companies to have achieved this record of success over that time period. For fiscal 2012, revenues grew 11% to $806 million and diluted earnings per share grew 14% to $4.12 which is remarkable.

As a CEO, he is recognized for providing tremendous systematic, analytical and data-driven solutions with steady infusion of innovative ideas and creative judgment to sustain position at the cutting-edge of financial services and software