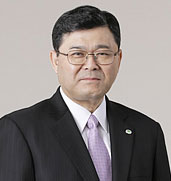 Hard work and perseverance – the key to success...

He is not someone born with a silver spoon. He wasn’t one of those who inherited a multi-billion dollar conglomerate at birth. He earned his success with hard work, perseverance and smartness. Strong determination and striving for success is what keeps him achieving new feet in his professional life.

At the age of 59, he leads Hitachi Data Systems as the Chairman and Hitachi Solutions Ltd. as the President & the Chief Executive Officer. Hitachi Data Systems, a wholly owned subsidiary of Hitachi Ltd., is a company active in the IT industry in computer data storage systems business since 1989 which offers modular mid-range and high-end storage systems, related software and services. Hitachi Solutions Ltd., a core IT Company of the Hitachi Group, offers solutions to support social life and corporate activities, in diverse fields including the finance sector, the public & social sectors, the manufacturing industry and the distribution sector. He played major role in the globalization of these organizations.

His contribution to the success of the corporation is immense. His relentless efforts gave new heights to the organization in terms of growth and expansion of its business. At present, products of Hitachi Data Systems are sold in more than 170 countries and regions either through direct channels or through indirect channels. It is his effort that the organization has touched new levels of success. Under his leadership, in April 2012, Hitachi Solutions Group integrated three companies including Hitachi East Japan Solutions, Ltd., Hitachi Chugoku Solutions, Ltd., and Hitachi Solutions Kyushu, Ltd. It is his endeavor towards excellence that Hitachi Solutions Group aspires to become a comprehensive provider of hybrid and integrated solutions globally.

His business penetration, technological expertise and continuous efforts helped to achieve new level of success and also open up new avenues for growth and expansion of the IT giant Hitachi’s business and operation in the global market. A man of high technical competency firmly believes that technology is a key for enlightenment and betterment of humanity. Going by these humble principles he had thrived through stiff competition to carve a niche for himself and the pay checkers. The attitude of this magnum professional is much needed for everybody who needs to survive the flat world.

A native of Fukushima, Japan, Kaichiro Sakuma came to this universe on January 29, 1954. On March 1979, Mr. Kaichiro Sakuma graduated from Graduate School of Science, the University of Tokyo and holds a Master of Science degree in Physics from the University of Tokyo. Since then, there was no looking back. Such was his proficiency in academics; he joined Hitachi in April 1979, only a month after graduation.

Kaichiro Sakuma’s professional life took a giant leap when he was titled as Senior Executive Vice President of Hitachi Data Systems Solutions Holding Corporation in April 2007. With this, his roles and responsibilities grew in the corporation where he excelled with his performance. In a year’s time, in April 2008, he became the President and the Chief Executive officer of Hitachi Information and Telecommunication Systems Global Holding Corporation and was responsible for the corporation’s IT business operations in the United States.

He ascended to the position of Chairman of the Board of Hitachi Data Systems in April 2012. Looking at his career and achievements, it is quite obvious that Kaichiro Sakuma had always given his best and strived to achieve corporate objectives and goals of Hitachi Ltd. and success came in his way kissing his feet.

His success and career growth speaks volumes about his leadership skills, management skills and decision making abilities. He is a man of vision and aspires to touch new glory in his life through the success of the organizations flourishing under his leadership. He never stops in his path and continues to excel in whatever that is expected of him. Only few have the zeal and determination to carry forward their career with such glory and Mr. Kaichiro Sakuma is definitely one of those.

Hitachi Solutions is poised to set up an Indian arm by the end of this year and will be setting up three global development centers in Chennai, Hyderabad and Pune. The company has been expanding at a rapid pace and this elucidates how Mr. Kaichiro Sakuma has plotted a steady growth plan for his company. He has indeed been instrumental in moving the company forward with much skill and indulgence.