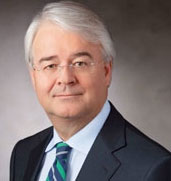 The global financial crisis has really highlighted the need for complete transparency across global markets...

He is one of those people who believe in “getting things done” and driving results through collaboration, partnership and relationships. Michael Andrew - elected Chairman of KPMG International leads the KPMG global network of expert services firms providing Tax, Audit, and Advisory services for a four-year term, viable October 1, 2011. With an enthusiastic and genuinely friendly attitude, Andrew radiates an earnest enthusiasm for delivering value and benefits to his customers.

Throughout his career, Michael Andrew has constantly proved his ability to lead through diverse and challenging situations.

He is the man who had served many multinationals at global level and had set benchmarks for the next generations. He is a ware house of abilities, skills and proper planning which proved to be successful factors of the company. His outrageous performance in the tax segment had helped him in strengthening his presence in the corporate scenario.

He has an extensive experience in rising markets, both in Asia Pacific and Eastern Europe and played a key role in Australian company's robust development. Lately, he has been one of the architects of KPMG’s global strategy. A while ago; he served six years as Managing Partner of KPMG Australia’s Melbourne location and Deputy Chair of KPMG Australia from 2001 to 2007.

As an Ambassador for the Melbourne Community Foundation, he is a delegate of its Business Reform Working Groups & Indigenous. As a chairman he has an extensive range of business and community contributions towards Skills, Education, and Innovation Taskforce.

One may assume that constant vilification does not affect Andrew, but it does affect him. Cynosure of everyone’s eye, Michael Andrew has always achieved success in whatever he does. He has helped many clients in their personal and partnership tax matters.

Michael is a graduate in combined Law and Commerce from Melbourne University. He is a qualified barrister and solicitor of the Supreme Court of Victoria and Fellow of the Institute of the Chartered Accountants. During his vacations he worked at ICI in their legal departments for two years.

Before joining KPMG, Michael worked with an industry at Orica. He is the chairman of KPMG Asia Pacific and Australian Chairman of KPMG since 2007. He is also a member of KPMG’s International Board and Executive Team.

As a part of the graduate training, the ICI officials were asked Mike to go as a cost accountant to an outside business for another two years. Later he became the Tax Manager and they asked him to relocate to Papua New Guinea to which Mike refused as he had a young family. After declining this offer, he joined Peat Marwick as a Tax Consultant in the year 1984 and he became the partner of Peat Marwick in the year 1988. On the very first day Mike was sent to Amsterdam and at that time Peat Marwick was becoming a part of the KPMG and they wanted a lawyer to help them in their mergers. From the year 1992 to 1994 Mike helped KPMG in running its international tax practice which involved developing the tax practice, developing the first Asia pacific strategy and setting up of branches in Europe.

Even though they have the fancy ad campaigns or the star bucks cards for the tattletales, Michael never think too highly of the second tier accounting firm and questions their authenticity on auditing the big global banks.

Andrew doesn’t consider a partner at his global firm who passes the material or the non public information about the audit clients to a golf buddy. He considers this as an insane attitude and quotes that it is really difficult to deal with a rouge boy. This was quoted on the trading scandal involving the former head of the firm’s Los Angeles audit practice.

He encountered multitude of experiences garnered through his travels to over 90 countries and exposure from the various positions he had held in KPMG. He reveals the secret of his success by saying that one should have tact to adjust, adapt and develop in the environment of the host country.

Michael Andrew says that, "It is an amazing privilege to be elected Chairman of KPMG International. Tim Flynn has furnished sublime leadership these past four years and Andrew anticipates expanding his record of accomplishment. Under Tim's leadership, KPMG launched an aggressive development strategy in 2010, and it is now about execution and winning in our key markets. Andrew passionate about KPMG and it is ability for growth. Our key strength is the strong collaboration kinships KPMG member firms have with their customers. Andrew’s primary focus will be improving and enabling our individuals so they can implement on our strategy and help KPMG's clients succeeds in this increasingly complex world."

KPMG is a global professional firm providing audit, tax and advisory services operating in 150 countries with 138,000 employees. Each KPMG firm is a legally distinct and separate entity.

At the age of 54, Mika has been appointed as the Chairman of KPMG International and for this role he was elected unanimously by the KPMG International Global Board and Council. In his 27 years of work experience Mike has had broad experience in emerging markets both in Eastern Europe and Asia Pacific and has also played a key role in the robust development of KPMG. Mike succeeded Timothy P Flynn who had served KPMG for 32 years and retired when his term with KPMG ended in September.

Previously Mike served for six years as the Managing Partner of the Melbourne Office and Deputy Chairman of KPMG Australia from 2001 to 2007. He was the member of the KPMG Global Governance Review in 2008 and also the member of Compensation and Nomination Committee. He also served as the member of its Risk and Compliance Committee in the year 2009 to 2010. Now he is the chairman of the Governance Committee of the Board. Mike is involved in corporate governance, strategy and risk management advice to many leading companies of Australia and also played active role as a Global Lead Partner for large multinational clients.