As stated earlier, the language that describes the Web service in a WSDL document is called WSDL. WSDL, a specification that the W3C developed, aims to provide a standard that can describe services. WSDL is based on XML; therefore, it provides an easy and a simple way to describe services in a text format. WSDL uses XML messages to allow structured communication between a set of endpoints. For example, an XML message can transfer between the client application and the service provider application. In this case, the client application and the service provider application are called endpoints.

When you open the CCValidate.wsdl document, the file contains the following code:

Now we will discuss the components of a WSDL file with reference to the preceding code.

Next, the URLs of the namespaces that you need to include in the WSDL document are added using the xmlns keyword. You can also provide a prefix to the namespace, as shown:

In the preceding code, soap is the prefix that is assigned to the

After including the namespaces in the WSDL document, you need to include schemas or references to schemas. You can do this by using the types element. The syntax for the types element is as shown:

As you can see in the preceding syntax, the types element is included within the definitions element of the WSDL document.

Note?/td>
The abstract data type definitions that you define in the types element can be included in multiple WSDL documents.

In addition to the validateCC and validateCCResponse elements, the types element declares a Boolean type element with the name boolean.

You can use the part element to define a part in a message. A message that contains a part element is shown here:

The preceding code uses the message element to define the message validateCCSoapIn. The WSDL document contains a message definition for the messages that are transferred using SOAP, HTTP GET, and HTTP POST. In addition, each In message that is defined for a protocol has a corresponding Out message. Therefore, the previous code contains six message declaration statements—two for each protocol.

Note?/td>
As you can see, the part declaration statement contains the prefix s0, which indicates that the WSDL document is created using Visual Studio .NET.

Similarly, Visual Studio .NET creates a code for the HTTP POST protocol, as shown in the preceding code.

As you already know, a Web service contains Web methods that you can use to perform a specific operation. A client application can request these operations and then execute them. Therefore, after you define messages, you need to associate them with the corresponding operation. To do this, you use the operation element, which, in turn, is included in the portType element. You will learn about the portType element in the later section titled "The portType Element."

The syntax of the operation element is as shown:

A WSDL document supports four types of operations. These operations are discussed in the following list:

This operation is not commonly used in the Web services scenario. The example of this type of operation is shown in the following code:

You can combine the operations in WSDL document to form a set of operations called a port type. You can declare port types by using the portType element. In addition, you can specify a name for the port type by using the name attribute of the portType element. For example, you can combine the input and output elements of the validateCC operation in a port type, CCValidatorSoap. The code for the CCValidatorSoap port type is as shown:

Consider the following code snippet for the binding element:

The preceding code creates a binding with the name CCValidatorSoap. The name attribute specifies a unique name for the binding. In addition, you need to specify the port type for the binding element. You can do this by using the type attribute.

When you create a message, it needs to be associated with a protocol. This means that a message is serialized in the form of either a SOAP request or a response. Therefore, you need to specify the encoding form used for the input and output elements of a message. You can do this by using the soap:body element.

For example, you need to include the soap:body element for the input and output elements of the validateCC operation as follows:

While defining a port, you need to specify a unique name. To do so, you use the name attribute of the port element. In addition, the port element contains an extensibility element: soap:address. This element binds the port to an address of an endpoint, which is a URI of an endpoint. The users can connect to the service by using the URI. Following is an example of a port element:

The preceding code creates a port for each binding that corresponds to the SOAP, HTTP POST, and HTTP GET protocols. Next, the soap:address element binds the port to the corresponding URIs.

The service element contains ports that correspond to each of the protocols. However, you should ensure that all ports expose the same functionality. The elements that are used in a WSDL document are summarized in Table.

The Elements that are Used in a WSDL Document 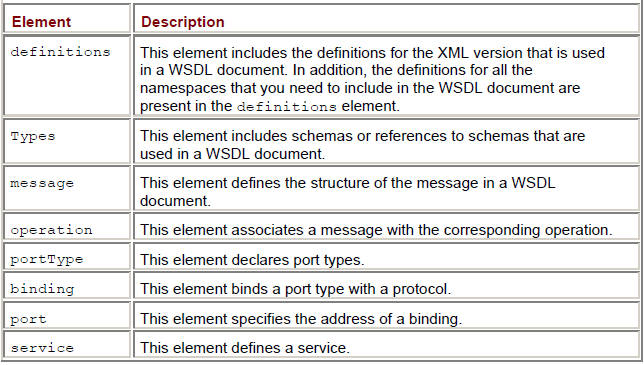 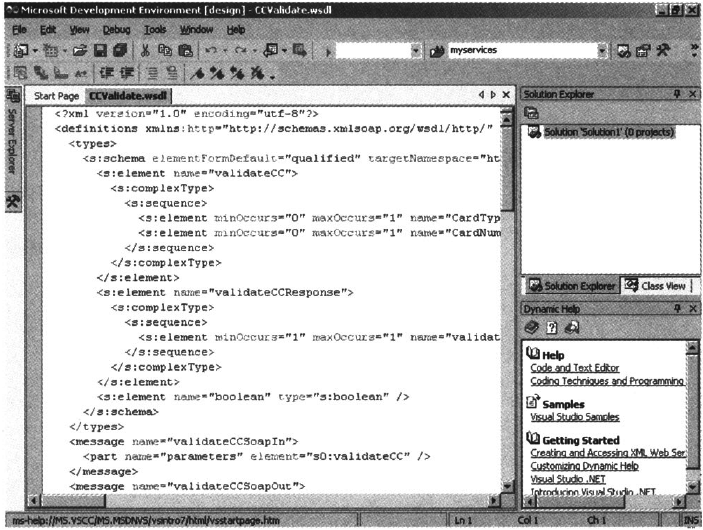