JWSDP consists of software, tools, and a set of APIs that Sun Microsystems, Inc. provides. You can use these components of JWSDP to develop, deploy, and test Java Web services.

While you're unpacking and installing the JWSDP package, you are prompted for a username and a password. You need to provide this username and password (see Figure) while you deploy the application in the Tomcat container. 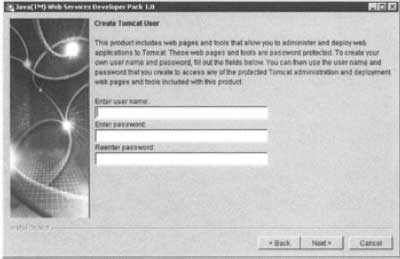 You need to install Java2SDK Standard Edition version 1.3.1_03 or later to be able to use JWSDP. After you have installed the JWSDP toolkit, you need to set the following paths:

JWSDP consists of the following components:

JSPs are dynamic Web pages that are executed at a server. A JSP page contains Java code scriptlets that are executed during runtime. The output of execution of Java scriptlets is displayed on the client Web browser. You can write the code for scriptlets to perform numerous tasks, such as accessing databases, performing numerical calculations, and so on.

Many tasks are common across JSP applications. To perform such common tasks, you are provided with a set of standard tags that work the same way everywhere. These tags are packaged in Java Server Pages Standard Tag Library (JSTL).

JSTL uses multiple Tag Library Descriptors (TLDs) to specify a namespace and its functionality. You can categorize the tags in JSTL into the following divisions:

You can use a JSTL core tag in a JSP page by using the taglib directive, as shown in the following example:

In a web.xml file, TLDs are referenced by using the following code snippet:

You can find the JSTL TLDs in JWSDP in the directory <JWSDP_HOME>/tools/jstl/tlds.

You can refer to these implicit objects by using the following syntax:

In the preceding example, the number of items in the current session is being evaluated.

Before you use the registry server, you need to start both Tomcat and the Xindice database. To start Tomcat, execute the following command at the command prompt:

Tip?/td>
You can execute this command from any directory if you have set the environment variable PATH to <JWSDP_HOME>/bin.

To verify that the Tomcat server has started, type the following address in the address bar of the Web browser:

To start the Xindice database, execute the following command:

To stop the Xindice database, execute the following command:

The registry server provides a shell script to perform the following tasks:

The Indri tool provides a GUI interface to access the registry server database. To start the Indri tool, execute the following command at the command prompt:

The output is displayed in Figure.

The Output of the Command to Run Indri

The GUI interface of Indri is displayed in Figure.

The GUI Interface of Indri 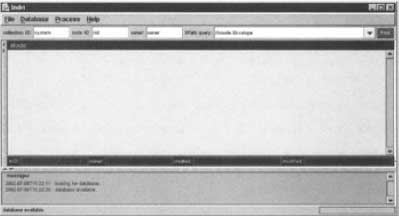 Microsoft and IBM provide registries that implement UDDI Version 2. You can use these test registries to publish your service.

In Java, you can use different applications to publish or access registered services. These registered services can implement different registry standards. JAXR helps you work with disparate registries. For example, you can use JAXR in your application to search for services in the IBM registry. Similarly, you can use JAXR to publish your service and manage your service data in some registries that might implement other registry standards.

The following two packages are used to encapsulate the complexities of working with
registries in the Java service model:

Tip?/td>
To use JAXR in your application, you need to import these packages.

Next, you can create an instance of the ConnectionFactory class, as shown in the following code:

The following code shows how to locate the Organization object:

In addition to querying registries, you can perform simple queries on registries and use JAXR in your application to register your service in a registry. You can also delete your service from a registry by using JAXR.

As you know, JAXP parses the XML documents by using the SAX or DOM parsers. JAXP encapsulates the complexities of using SAX and DOM APIs from Java applications to parse XML documents.

JAXP also enables you to switch effortlessly between different vendor-specific parsers. You can switch between parsers without needing to recompile your Java application. JAXP also supports the format transformation of XML documents by using XSLT.

To process XML documents by using JAXP, you need to perform the following steps:

We will now discuss the content of these files.

The code of the organization.dtd file is as follows:

The code of the organization.xml file is as shown:

To parse the XML document and display the result, create a Java class with the name OrganizationInfo. The packages that you need to import are as listed:

Compile and run the OrganizationInfo class.

As discussed JAXM enables you to create, send, and receive SOAP messages. JAXM conforms to SOAP version 1.1 and SOAP with Attachment specifications.

A JAXM client can use a messaging provider, which is a service that transmits messages. JAXM provides the following packages to perform messaging in the Java service model:

The code for specifying the URL of the receiver and obtaining a connection is shown in the following snippet:

After you obtain a connection, you need to create a SOAP message. You then obtain the various parts of the SOAP message to add your message content. The following code illustrates how to add contents to a SOAP message:

You can use the SOAPMessage object to print the receiver's response.

Creating A Web Service From An Interface

Introduction To The Atl Server

Design And Creation Of The Knowledge Share Web Service

Design And Creation Of A Web Service Using The Ibm Toolkit

Creating A Mobile Application That Consumes A Web Service