Markup Languages (MLs), such as SGML, HTML, and Extensible Hypertext Markup Language (XHTML), are used to format text. In ancient times, the set of instructions given to printers to print a page in a specified format was called markup, and the collection of such instructions was called a Markup Language. This is how the concept of MLs originated. These instructions were written in a format that was different from the main text so that they were easily differentiated from the main text. This format was later transformed in the form of tags that are currently used with the markup languages.

For example, to convert the main text written in a document to bold, HTML uses the <B> tag at the beginning of the text. Similarly, the </B> tag is used to mark the end of the text that needs to be bold, as shown in the following example:

The following sections discuss SGML, HTML, and XML in detail.

Introduced in 1969, Generalized Markup Language (GML) was the first markup language. GML used tags to format the text in a document. However, different documents created using GML required different compilers to compile them. In addition, standards were not available for compiling the documents written in GML. This led to the evolution of SGML.

Organization for Standardization (ISO) recognized SGML as the standard markup language. SGML allows you to define and create documents that are platform independent and can be used to exchange data over a network.

Despite the advantages that SGML offered, developers felt a need for another markup language because the authoring software (software used to create SGML documents) was complex and expensive. In addition, with the increasing popularity of the Internet, it was necessary to create a markup language that could be used to develop Web pages easily and efficiently. As a result, HTML was developed in 1997.

HTML is the markup language that was evolved from SGML. However, unlike SGML, HTML does not require expensive software for creating documents. Instead, you can create an HTML using text editing software, such as Notepad.

HTML is used to describe and format data so that the data can be viewed using a Web page browser. Similar to SGML and any other markup language, an HTML document also contains tags. For example, to provide a title to the document, you use the <TITLE> tag. Similarly, to include headings in your document, you can use heading tags, such as <H1>, <H2>, and so on. Using these and several other tags, you can create a Web page as shown in the following example:

APB Publications Inc. is a group of publishers based in New York. It has been publishing technical books for the past 10 years and is now moving into publishing books on fiction.

It has over 10,000 employees working in different branches of the organization. 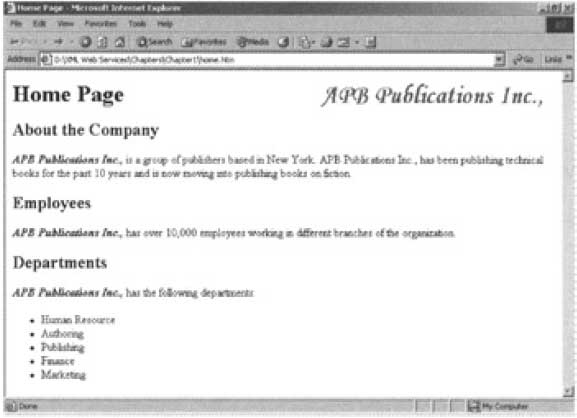 As you can see, creating documents using HTML is easy. However, HTML does not allow you to create custom tags. This implies that you are limited to using only the tags that are predefined by HTML to define the formatting of the text in the page. To create your own tags with generic names, you need XML, which is another markup language. In addition, HTML does not allow you to present information in different browsers.

Having discussed markup languages, such as SGML and HTML, we will now look at XML and present the advantages offered by XML over these languages.

XML, a subset of SGML, is a text-based markup language used to describe data. However, you cannot format data using XML. To do so, you need to use style sheets. You will learn about style sheets later in this section.

Another significant advantage of XML is its ability to create tags with names that users can identify easily. This implies that XML allows you to create elements, attributes, and containers with meaningful names, as and when the user requires.

Now we will consider another example of an HTML file:

The output of the preceding code is shown in Figure. 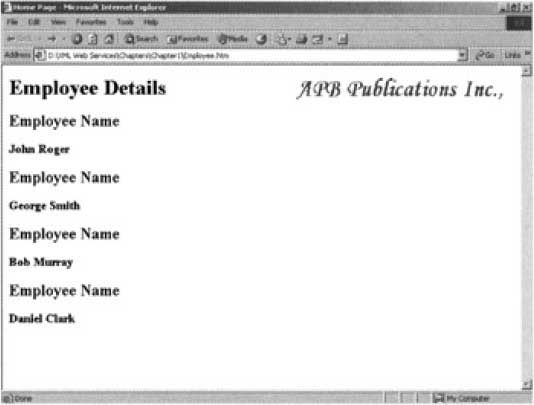 You can view the output of the preceding code by saving the Notepad file with a name Employee.xml and opening the file in Internet Explorer. The XML document will appear as shown in Figure. 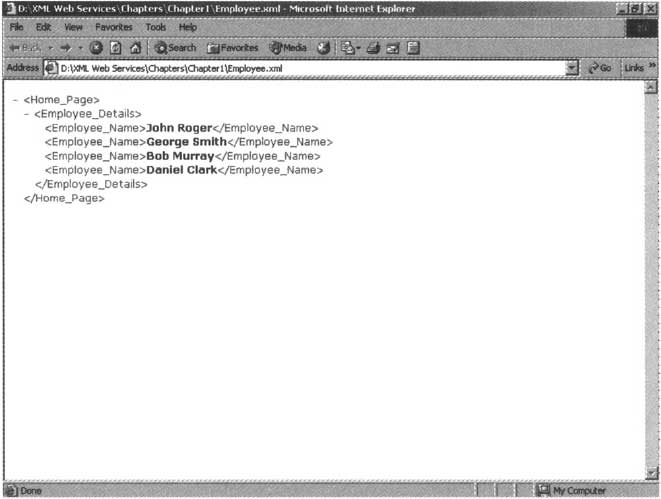 The ability to create custom and meaningful tags in XML makes it a hardware and software independent markup language. This implies that an XML document can be interpreted easily by any computer that is running on any operating system. Therefore, XML is widely used as a markup language that transfers structured data over a network. In addition, XML is used to transfer structured data in high-level Business-to-Business (B2B) transactions.

The following list summarizes the advantages of XML as a markup language:

However, consider a situation in which XML is used to create Web pages, which include tags as shown in the following example:

If a search engine parses the document containing the tags and retrieves the data from the <subject> and <category> tags, then the result returned by the search engine is accurate. This helps to omit several thousand Web pages that contain these keywords in a different context. However, this scenario is not plausible because Web will not become XML based in the near future.

An example of such a template is shown in the following code:

XML allows you to create custom tags. However, when you create your own structured document, you need to convey the structure to the users who use the XML document. You can provide this information to the users in the form of Document Type Definitions (DTDs).

Consider the Employee.xml file that you created in the previous example. To make this document, you need to include a DTD with the document. In this case, a DTD would contain information such as the elements in the Employee.xml file and the relationship between these elements. In addition, a DTD contains the vocabulary rules that are used as standards to exchange data in an XML document. However, it is not essential to have a DTD associated with every XML document.

The DOCTYPE declaration statement also includes a keyword, which can be either SYSTEM or PUBLIC.

As discussed earlier, name is the root element in the XML document, and the keyword is either SYSTEM or PUBLIC.

Having looked at the DOCTYPE declaration statement, we will next discuss the other components of an XML document.

Components of an XML Document

An XML document consists of several components, such as declaration statements, elements, tags, and attributes. The following sections discuss these components in detail.

In addition to the markup syntax, an XML document consists of the content or data to be displayed. Consider the following example:

In this case, the tags <Employees>, <Name>, <Age>, <Designation>, and <Department> are the markup syntax for the Employees.xml file. However, the content of the XML file is the data enclosed within tags, such as John Smith, 30, HR Executive, and Human Resources

The exclamation (!) sign in the preceding code indicates that the text within the tags is a comment entry. Consider the following example:

The use of comments in a document provides users with additional information about the document. However, while writing comments, you need to follow the listed guidelines:

The building blocks of any XML document are its elements. Elements are containers that contain XML data, such as text, text references, entities, and so on. You can also include elements within another element. This implies that you can have nested elements. The content within an element is called the element content. It is essential that you enclose all XML data within elements.

While creating an element, you need to include the starting tags and the ending tags, both of which contain the name of the element. As discussed earlier, you can give any user-defined name to an element.

Tip?/td>
You cannot include white spaces in an element name, but you can begin the name of an element with an underscore (_) symbol or a letter.

In the preceding code, the Employees element has <Employees> as the starting tag and as the ending tag.

Tip?/td>
It is essential to have corresponding ending tags for all starting tags. Also, remember that the names given to elements are case sensitive. Therefore, <Employees> and <employees> are interpreted as different tags.

You have seen that all elements include starting and ending tags. However, if you have to create elements with no content, you can create empty elements. Empty elements can be written in an abbreviated form. For example, if the <Employees> element in the previous example contains no text, you can write the element as shown:

However, if you include both starting and ending tags as shown in the following code, an error is not generated:

It is essential for HTML users to understand the concept of empty elements because not all the tags in HTML require ending tags. As a result, the following code in HTML would not produce an error:

However, the preceding code will generate an error in XML. To avoid an error, you need to include the ending tags as shown:

As discussed earlier, you can include nested elements in an XML document. Consider the following example:

The output of the preceding code is shown in Figure. 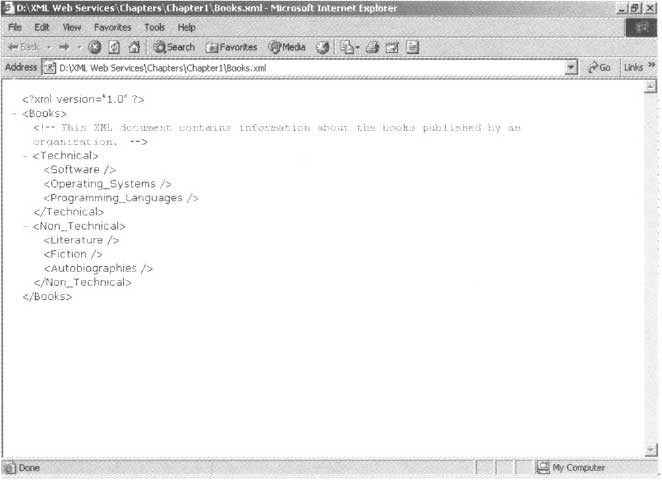 Attributes are used to specify properties of an element. An attribute has a value associated with it. Consider the following statement:

In the preceding code, the keyword src is an attribute of the element img, and the value assigned to the src attribute is APB.gif. Attributes allow you to provide additional information in an XML document. For example, the src attribute of the img element specifies the name of the image file to be included in the XML document. The value of an attribute is assigned to it by using the equal sign (=), and it is enclosed within double quotes (") as shown.

All the attributes that you declare for an element are included in a DTD. A DTD contains the ATTLIST tag that includes the attribute declaration statement for each attribute.

Tip?/td>
You can include multiple attribute definitions in one ATTLIST tag. However, to avoid confusion, it is advisable that you include a different AATLIST tag for each attribute.

The syntax for the ATTLIST tag is as shown:

Consider that you need to create an element with the name Books. In this case, you can create an attribute with the name type and assign a value, Technical, to it. To do so, add the following statement:

After an attribute is declared and a value is assigned to it, you need to include its declaration in a DTD as shown:

In the preceding code, CDATA implies that the value of the attribute is stored in a character string.