Active Server Pages .NET (ASP.NET) is a new technology that is used to create dynamic Web pages. You can combine these Web pages to form a data-driven Web site that accesses data from a data source. You will learn about dynamic Web pages in detail in the later section titled "Dynamic Web Pages."

ASP.NET is evolved from the Active Server Pages (ASP) 3.0 technology, which has been used over the years to create Web pages. ASP allows you to create dynamic Web pages easily and quickly. Therefore, ASP.NET allows you to create scalable, dynamic, and interactive Web pages by using any of the .NET languages, such as Visual Basic .NET (VB.NET), Visual C#, and so on.

Features of the ASP.NET Technology

For example, the programmers who develop applications in Visual Basic can use Visual Basic .NET to develop Web pages. Similarly, the programmers who work in C++ or VC++ can use Visual C# or managed extensions in Visual C++ .NET to develop Web pages. Various .NET languages that you can use to create ASP.NET applications are shown in Figure. 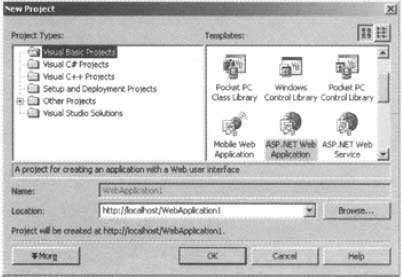 Note?/td>
The .aspx.vb file is formed if you create a Web application by using Visual Basic .NET. Similarly, if you use Visual C#, a file with the extension .aspx.cs is created.

When you create ASP.NET applications in Visual Studio .NET, it creates several default files. These files have different file names and extensions. For example, Visual Studio .NET creates a user interface, a file that contains the code for the user interface, reference files, a file containing the programming logic of the application, and so on. You will learn about these files in detail in the section "Default Files in a Web Application."

Creating A Web Service From An Interface

Introduction To The Atl Server

Design And Creation Of The Knowledge Share Web Service

Design And Creation Of A Web Service Using The Ibm Toolkit

Creating A Mobile Application That Consumes A Web Service