Programmers worldwide have been creating applications that access data from a database. One of the technologies that an application uses to interact with a database is ActiveX Data Object (ADO). ADO is an easy-to-use data access method that is based on COM. Microsoft combined the features of ADO with the .NET Framework to develop a technology called ADO.NET.

ADO.NET is a data access model that distributed applications use to communicate with data sources such as Microsoft SQL Server and Oracle. Using ADO.NET, you can develop high performance scalable applications that can interact with a database. In addition, the applications that use ADO.NET are based on the .NET Framework; therefore, they are interoperable across platforms.

ADO.NET allows you to access or modify the data in a database. To dothis, the application first needs to connect to a database. After a connection is established, you can make changes to the data in the database. Because ADO.NET is based on the .NET Framework, you can use the classes provided in the .NET base class library. These classes include OleDbConnection, SqlDbConnection, and so on.

As discussed earlier, ADO.NET offers you an easy and efficient way to create applications that access data from a data source. The following list discusses the advantages of the ADO.NET technology:

The architecture of the ADO.NET applications is shown in Figure.

The Architecture of the ADO.NET Applications.

We will now discuss these components in detail.

A dataset is a memory cache object that provides a relational view of the data from a data source, such as a database. To create a dataset, you can use the DataSet class, which in turn uses the DataTable class to store the tables within the dataset. The data in a dataset is stored in XML format.

Components of a Dataset

You can use a DataSet object to store data from one or more tables in a database, the relationships between the tables, and the constraints and keys defined for the tables in the database.

These form the components of the DataSet object, as discussed in the following list:

The Components of the DataSet Object. 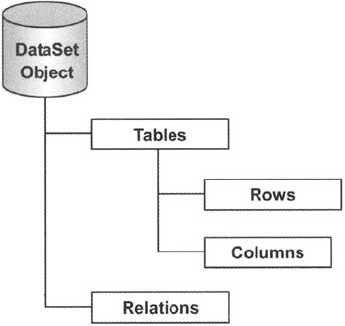 Having discussed the components of the dataset, we'll next discuss the types of DataSet objects.

Data providers are used to provide access to data in a database. To do this, data providers allow you to establish a connection with the data source, execute commands, and retrieve results.

A data provider has four components, as discussed in the following list: